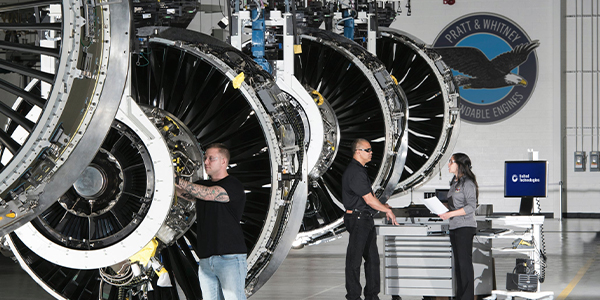 United Technologies Corpora-tion is increasingly involved with the World Council for Sustainable Development (WBCSD) and we share many of the same goals and commitments.

China is critically important to us and to most multinational companies, and we have a history here dating from more than a century ago. Otis installed its first elevator in Hong Kong in 1888, and in Shanghai in 1907. Carrier’s first installation was in Shanghai in 1911 and was a dehumidification system in a silk spinning mill. We employ today 220,000 people worldwide, 70 percent of them outside the United States, including 17,000 in China. We account for more than a quarter of the elevators installed in China annually and comparably 20 percent of the commercial air conditioning. More than half of the jet engines for Chinese large widebody aircraft are built by our subsidiary, Pratt & Whitney.

Stepping back from China, UTC is a $45 billion revenues company with trademark subsidiaries you will recognize: Otis for elevators, Pratt & Whitney for aircraft engines, Sikorsky for helicopters, Carrier for air conditioning, Chubb and Kidde for fire protection and security, and Hamilton Sundstrand for aircraft and space systems including unusual products like all the space suits for the American manned space program.

Sixty percent of our revenues are outside the United States, and we operate in just about every country of the world. Because we make and sell things like elevators, air conditioning, and fire and security systems locally, we end with the even higher 70 percent of non-U.S. employment. Common across our products, we do one thing, which is to convert energy into useful work and to overcome only two but very powerful forces, gravity and weather. The first for flight and for vertical transportation in buildings, and the second to make our buildings comfortable and clean in all seasons.

Because our products are long lived and we operate all over the globe, they account for as much as 2 percent of the greenhouse gas emissions worldwide every year. So we are right on top of the conservation agenda, and I believe passionately in the opportunities for energy efficiency gains already achieved and still in front of us.

For one example, elevators consume electric power when lifting loads. They can also give this power back with descending loads, and we have started broadening this capability across the product line in just the last three years. It’s physics that in a perfect system without friction or other losses there would be no electric power consumption at all, because what goes up comes down, and we’re dealing with gravity in both instances. We won’t get all the way to 100 percent efficiency, or zero energy consumption, but these new regenerative systems use 75 percent less power than comparable models a decade ago.

Climate control accounts for more than a third of total building energy consumption worldwide and ranks near the top in total energy uses. As in every single energy application, efficiency gains and big ones at that are possible and achievable. With Carrier’s leadership within its industry, the U.S. government raised the minimum electrical efficiency for residential systems sold in the United States by 30 percent, effective just two months ago.

Of greatest potential of all, we believe, are on-site electric generation systems capturing otherwise waste heat. For perspective, more than 90 percent of energy extracted from the ground is wasted before it becomes useful work. A third of this loss comes from waste heat vented to the atmosphere in central generating plants. Although we lose 7 percent in transmitting electricity, we lose all of the energy in the heat, which can’t be transmitted over any significant distance at all. The solution is to generate the power on-site where the heat can be captured. We build products like this today, with energy conversion efficiencies of over 80 percent. The heat powers air conditioning via an absorption chiller cycle and comparably can power refrigeration, dehumidification and hot water.

Supermarkets are the highest energy intensity buildings in the world. We have prototype installations in the United States, at Wal-Mart and A&P stores, and we anticipate a large launch order later this year.

The prime mover in these on-site systems is typically 200 to400 kilowatts in capacity and can be either a microturbine or fuel cell. Fuel cells powered with hydrogen have the further benefit of absolutely no emissions at all. In passing, we can note that UTC’s fuel cells are the most advanced technically in the world. Our origins in the technology date from the American manned space program in the 1960s, with every American manned space launch since then having carried our fuel cells. The combustion-free oxidation of hydrogen in a fuel cell produces the benign and useful outputs of water (which astronauts drink) and electricity and heat powering the shuttle’s systems.

Energy intensity gains within a company’s operations are equally achievable and powerful. The result for UTC has been an 18 percent absolute reduction in energy consumption, measured in kilowatts and Btu, since 1997 on a company twice the size. This may be the most significant statistic in these remarks, for it shows what can be done with energy intensity with a focused effort and without deprivation or any lessening in the company’s efficiency or operations worldwide. Financial returns on investments to achieve this have been good.

I want these examples to be a decisive rebuttal to the views that energy demands will grow forever and that absent cheap and abundant energy we’ll stifle economic growth. That hasn’t been UTC’s experience at all and we’re confident in our numbers and conclusions. We don’t think it’s been the experience of many companies like us. Coming back to our host country this morning, it doesn’t seem like it’s China expectation or requirement either.

China is in its 11th Five Year Plan now (2006-2010), and notably this has two priority goals: doubling GDP by 2010 and reducing energy intensity in GDP by 20 percent over the same period. Differences in such energy intensity worldwide are great and demonstrate the potential in front of us. Although an emerging economy such as China’s lags efficiencies in advanced economies, the fact is our own country as the largest economy in the world lags others by a significant margin. France leads the world in lowest CO2 per capita because of its smaller cars and nuclear generation program and is three times less hydrocarbon intense than the United States. Although much less nuclear dependent, Japan and Germany have half the hydrocarbon intensity of the United States and are evidently advanced economies. I believe the potential for energy intensity reduction in the United States is great indeed and that we can do far more than we have to date.

With this perspective, China’s 20 percent goal does seem achievable and it’s laudable in any case to have put this big a goal in such public view. For comparison, a 45 percent reduction would get China to the world benchmark levels of Japan or Germany. A 33 percent reduction would get China to the higher intensity of the United States. Most significant is China’s stated intensity goal and the nationally organized commitments to achieve it. Along with lots of others, I’d like to see the United States with a comparable goal and priority.

The pressures to conserve are great in China for reasons unique to it. Greatest among these is likely the urbanization force, unprecedented in any other country at any other time of the world. The United Nations concludes that 80 million Chinese have urbanized in the last five years and that a further 250 million will in the next 20 years. For comparison, about 80 million people urbanized in Western and Northern Europe in the five decades after the war. The consequence for China is a buildings boom never seen before with associated energy, capital and other demands.

We can certainly confirm this boom from the elevator business, where we estimate a current elevator market in China approaching a third of the world’s total and twice as great as in any other country ever, the U.S. and Japan included.

We and Lafarge are proposing to lead a project with WBCSD. Our target is energy efficiency in buildings and includes the entire cycle from construction to operation to demolition. Lafarge is the world’s largest cement producer, and UTC is the largest capital equipment supplier to buildings. The work recognizes that buildings worldwide consume more than a third of our planet’s energy annually and that intensity reductions of a third or more are already in sight.

While we see these third or more gains already, the proposed ultimate project goal is buildings which are energy self sufficient, zero CO2 emissions, and commercially viable by 2050. This will be a tall order indeed, and we may not get there. But I learned a long time ago that big goals get big results, and more certainly that small goals will get small ones.

The lessons I bring from UTC are that we can always reduce costs and increase productivity and performance. The same is true for environmental impacts and potentially to an even greater degree because companies generally haven’t worked at these as hard as they have at costs and corporate profitability. Remember that more than 90 percent of the energy coming out of the ground is wasted and doesn’t end as useful. This is the measure of what’s in front of us and why we should be excited.

This excerpt has been reprinted by permission of United Technologies Corporation. To read the speech in its entirety, please visit: www.utc.com.