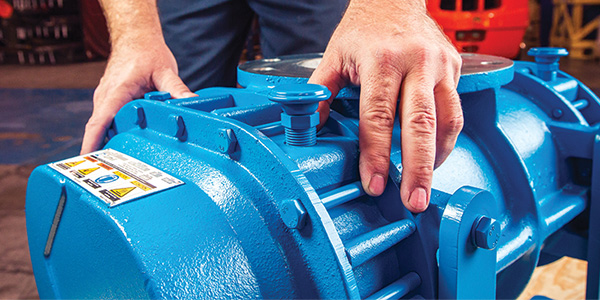 “Synergy” is always the buzz word when a merger takes place. Two companies that walk down the aisle always speak of “synergies” when they explain why they decided to tie the knot – synergies in markets, in cost reductions, in back-office operations, etc. There is a ready example of what happens when a merger really does result in synergies: Tuthill Transport Technologies of Brookston, Ind. In February 1999, Tuthill Corporation purchased Reyco(r) Industries and combined the operations of that leading manufacturer of suspensions with those of Fluidrive, Inc., which Tuthill had acquired in Decem-ber 1998. The move united two companies with long-standing traditions in their product categories: Reyco and Granning Suspensions since the late 1940s and hydraulic axles since the 1970s. The effects of this merger were described in a recent article – appropriately titled “Mergers and Acquisitions 101” – that quoted Tuthill Transport Technologies President David Dull.
“What Jay Tuthill, president of Tuthill Corporation, saw were two companies of similar size, serving similar markets but with different products,” Dull said in the story. “Jay’s thoughts were, ‘Why can’t we buy both companies, merge them together and end up with a stronger position in the marketplace than either company could achieve on its own?'”

Describing the nuts-and-bolts market benefits from the deal, Wayne Powell, Tuthill Transport Technologies marketing director, says, “Reyco has been a supplier of suspensions to major truck manufacturers. Fluidrive has the Granning brand, a major product line called auxiliary lift axles used on trucks, sold in the after-market. These days, truck makers are interested in installing lift axles at the factory, and Reyco has a relationship with these manufacturers that Granning never had. Reyco never made auxiliary lift axles, but under the Tuthill banner, we can serve the truck manufacturers with a broader range of things they want. What was difficult for each company individually is easier with their combined resources.”

The deal allows the two companies, now become one, to share more than just markets. Powell continues, “Reyco had much more experience with robotic welding than Fluidrive and can share that. Fluidrive had more experience with the lean manufacturing system pioneered by Toyota, and they’ve been able to share a lot of information with the Reyco people. The combined company is now moving to lean manufacturing. In fact, the entire Tuthill Corporation has a major initiative to put it into whole corporate concept, which we’ve been very helpful with.”

A third, and very obvious, benefit to the combined entity is what the corporate parent provides. Says Powell, “Tuthill has had a corporate-wide software system, the SAP enterprise resource system. We had two separate systems that don’t communicate, but thanks to Tuthill we’re now in the middle of converting to SAP. This allows customers to have just one invoice and one account rep to handle all product lines.”

Powell goes on to praise Tuthill for giving “a lot of support from the corporate parent in this conversion. They’ve already converted 30 other locations in the company, and we get the benefit from the learning curve they have already have.”

This merger has created opportunities on the product end as well. Tuthill Transport now owns two of the biggest brand names in truck suspensions, Reyco(r) and Granning(r), which it has decided to merge into one name: ReycoGranning(r), with a logo with combined names. “Both names have a lot of brand equity,” says Powell. “People hopefully will recognize the two combined as one. Putting them together has actually helped the two product lines by guiding customers to information on both product lines.”

Tuthill Transport Technologies is also the home of one other highly recognized brand – Mud Hog(r), a line of hydraulic drive axles for combines, cotton pickers/strippers, sprayers, turf mowers and other self-propelled equipment. The Mud Hog(r) line now includes more than 100 models, each designed for applications on a specific piece of equipment.

Mud Hog(r), Powell states, “gives us three product teams: trailer suspensions, powered vehicle suspensions (trucks, buses, fire trucks, motor homes) and hydraulic axles, now also used in construction and turf maintenance. These names will be important going forward as we try to grow all of our markets.” The brands also do much for the Tuthill corporate parent. “Tuthill wasn’t well known in any of these products prior to the mergers,” says Powell. “Now we’re looking to promote the Tuthill name, specifically in these markets. We’re advertising in truck fleet magazines, manufacturing magazines, farm magazines and publications for design engineers. It’s a major PR effort that includes press releases and feature articles.”

These efforts – combined with the weight of the synergies from the merger and the branding strategy – are critical to Tuthill Transport Technologies growth down the road. In the product area, says Powell, “the three product teams – trailer suspensions, powered-vehicle suspensions (trucks, buses), hydraulic axles for off-road applications – still offer a lot of growth opportunities for us. In particular, the trailer suspensions area is very promising. We have new products coming out in the air-ride category that should get us additional market share. Currently we’re the No. 3 supplier in this category.”

In terms of end-use markets, Tuthill Transport Technologies foresees new customer channels as containing a lot of potential. Powell says, “The motor home market looks to be a strong area for us, especially in the upper end of the market. Everybody wants more comfort and better handling from their motor homes. We have the suspensions for both front and rear of these vehicles in our product line right now. In auxiliary lift axles, the merger has given us a national sales force to sell these products.”

Through the synergies in products, its ability to use the muscle of its corporate parent and its ability to maintain the strong branding strategies already in place, Tuthill Transport Technologies has provided a textbook example of how to make a merger work. Such a merger could be looked upon almost as the “child” of two companies, and if so, Tuthill Transport Technologies has made its parents proud.