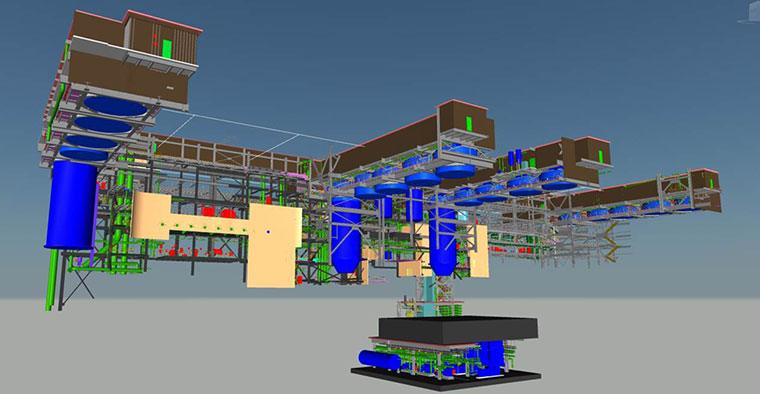 Acensium was contracted for a six-month installation project of a washdown and drainage system comprising thirty million cubic feet across ten floors in a large power plant in North Carolina. While installing these literal miles of piping, the Installing Contractor had to make a number of ‘on-the-fly’ re-routes and come up with creative mounting arrangements due to tight clearances. In addition, after the job had already begun, the team was made aware of possible conflicts with a large gas supply system that was to be installed the following year. The only way for them to ensure that the current project does not interfere with the future gas supply system was to place them both inside a 3D environment, a digital twin of the facility, that could be used to establish routing plans that accommodate for both installations.

The Installer, Keystone Constructors, Inc., had the foresight to equip their foremen and supervisors with tablets loaded with the as-built model and 3D design files created by Acensium that gave them immediate access to the digital twin of the environment. Armed with these devices, they were able to point the tablet at an area of the plant, see the virtual pipe runs, take measurements, and then make re-routing decisions quickly without having to go back to the office and pore over blueprints.

After learning partway through their current project about the upcoming installation of a gas supply system, Keystone Constructors, Inc understood the huge risk of interference and conflicts between the two installations. The incredibly tight clearances were already a challenge and future projects in the same area meant high chances for mistakes, delays, and costly downtime. By working with both the current and future project in a 3D environment, the Keystone Constructors, Inc team was able to detect possible clashes before they happen, saving time and money today and avoiding any extensive rework in the future.

“With the 3D digital environment, our team was able to find and avoid future interferences before they were even actually there,” said Joe Vance, Project Manager for Keystone Constructors Inc.

3D laser scanning for project analysis and project risk management delivers tens of thousands of dollars’ worth of savings if only a single issue is detected. By mitigating risk, facilities are able to avoid the cascade effect of running into unexpected issues – project delays, costly downtime, redesign and rework. 3D simulation can also expose any unexpected risk of injury or component failure, reducing the safety concern of having to make more cuts or increase labor hours.

“If you’re not utilizing 3D laser scanning and modeling, then you’re not doing the job justice,” claimed Joe. “Supervisors were able to go out in the field with models on handheld tablets and look at the project virtually and in person, taking snapshots of possible conflicts to report to the engineering team. That completely changes our workflow and saves a ton of time.”

The use of 3D models on tablets in the field completely changed the dynamics of the project workflow and decision-making process for everyone on site. Software 3D ‘viewers’ like Navisworks Viewer are lightweight enough to run on tablets and give easy-access to complete facility documentation and project specs. Team members no longer had to move from the site to an office in order to consult facility blueprints. The team used the integration of tablets onsite to view the current project state, the current project finished target, and expected future projects all at once, allowing team members to spot any routing conflicts between the projects and quickly determine the best alternate path.

“Having this software in the field enabled my team with the ability to check for future interferences at every step,” Joe said. “3D scanning and modeling would help us detect potential issues with the current installation or a future project on a weekly basis during the six-months the job lasted. The ability to detect and remedy these issues early on is a different world when compared to traditional methods with little insight into future projects.”

The handheld tablets included a measuring tool for brackets and rerouting ability so that changes or edits to the measurements within the model could be executed immediately. With the 3D reality capture being much more convenient and accurate, say goodbye to lugging around a thirty-pound roll of facility drawings for projects.

“The industry is going digital,” stated Joe. “We always want access to 3D scans for any project that we do because the technology speeds everything up about our workflow compared to 5 years ago. Moving forward, we plan to get a head start and put the 3D files on tablets two weeks before the project even begins.”

3D scan and model is a cost-effective tool that minimizes project risk and detects unexpected issues, delivering thousands of dollars in savings if just one issue is found. Utilizing software to view the 3D digital environment of the facility on a handheld tablet gives team members the ability to find and remedy these issues in the field. This saves them the hassle of having to return to an office to view the blueprints and streamlines both the workflow and decision-making process for the project.

Employing 3D scanning for your next construction or retrofit project will help manage project risk, reduce spending on delays or downtime, and make sure you catch unexpected issues before they become critical. 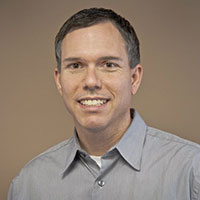 Rowan Connelly is the General Manager at Acensium LLC, an industry-focused engineering and intellectual services provider. Acensium delivers 3-D scanning and modeling, consulting, and operations and engineering support for the execution of construction and retrofit projects. Managing within a smaller private firm in a niche industry allows Acensium to be nimble and react to market changes quickly, which are traits not typically found in most larger corporations.