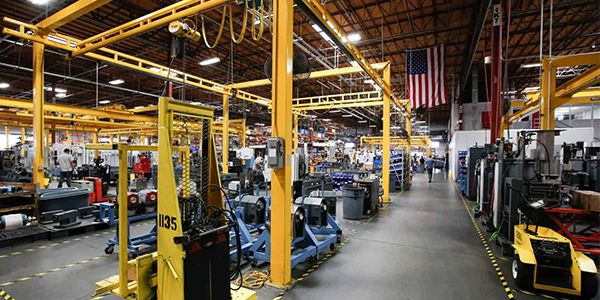 When Secretary of Treasury Henry Paulson led a delegation of top Administration officials to Beijing in December for talks with China’s leaders about the economy and trade, the voices of America’s manufacturers were still fresh in their ears.

Treasury Secretary Paulson personally told the NAM Board of Directors in September that President Bush had given him a mandate to address currency and other key bilateral economic issues with China. Paulson obtained agreement from the top levels of the Chinese government to establish the U.S.-China Strategic Economic Dialogue to do the heavy lifting on bilateral economic, trade and currency issues.

He said he wanted ideas and involvement from manufacturers, which led the NAM Board of Directors to formed a high-level NAM China Business Relations Task Force, comprised of companies representing the whole range of manufacturers’ views on issues affecting the bilateral trade relationship.

Top priorities addressed
Just a week before their departure, Secretary Paulson, Commerce Secretary Carlos Gutierrez and U.S. Trade Representative Susan Schwab all met with the task force.
In friendly and frank, results-oriented discussions, the NAM’s board-level task force delivered a clear message to Administration officials: Manufacturers in the United States face serious issues with China that must be addressed.

Our conversations focused on manufacturers’ views on the key priorities affecting bilateral trade, particularly the undervalued yuan and China’s need to move toward a market-determined currency, Chinese subsidies, and the need to follow through with its global trade commitments – especially remedying its inconsistent protection of intellectual property.

These discussions were reflected in the Administration’s priorities at the first meeting of the U.S.-China Strategic Economic Dialogue. In a Washington Post column the day before the Administration delegation departed for Beijing, Secretary Paulson called for continued strong commercial ties between the two countries, and noted, “The United States believes China can do more to reduce its trade surplus. We are encouraging China to introduce greater flexibility for its currency, consistent with economic fundamentals. And China needs to do more to protect intellectual property rights.”

In his Beijing press conference at the conclusion of the first meeting of the Strategic Economic Dialog, Secretary Paulson announced agreement with the Chinese on a number of fundamental principles, including, “the need for balanced, sustainable, growth in China without large trade imbalances . Important pieces of that equation include exchange rate flexibility, intellectual property rights protection, and increasing the role of consumption in the domestic economy.”

Manufacturers show the way
We continue to push China to remove non-trade barriers to U.S. products, and encourage more American-based companies to aggressively export to China. A U.S. Department of Commerce official is posted at the NAM whose responsibility is to explore export opportunities and help U.S. firms take advantage of them, especially smaller firms. We are determined to do everything possible to ensure that U.S. manufacturers are able to sell into the expanding Chinese market, and we are establishing a NAM member Export Council to assist in this effort.

Many manufacturers have already shown the way. For example, Sandy Westlund-Deenihan, president of Quality Float Works in Schaumburg, Ill., finds precision manufacturing gives her company an edge not just in competing against similar Chinese products in the United States, but even in exporting to China.

Even with fewer than 20 employees, she says, Quality Float Works considers itself a multinational company, one whose exports – including to China – have increased 20 percent.

Al Lubrano, president of the 200-worker Technical Materials in Lincoln, R.I., told a Congressional committee in 2005 that unfair Chinese competition was forcing some U.S. manufacturers either to move abroad or go out of business.

But on the other hand, Lubrano testified, “We are not without distinct advantage in U.S. production. Right now, my company is selling high technology precious metal-plated material systems to stamping companies in China that are unable to procure the high-quality product they need from a Chinese or other regional legal supplier.”

With his experience and insights, it’s no wonder Lubrano was eager to serve on the NAM’s U.S.-China Business Task Force. The 12-member panel includes representatives ranging from smaller manufacturing firms that employ several hundred to large firms whose operations span the globe.

This group’s creation is by no means NAM’s first foray into this high-stakes debate of U.S.-Chinese economic relations, including China’s currency valuation. Indeed, NAM has been the leading national trade association to take on the issue publicly; the association first placed China’s currency revaluation at the top of our trade agenda in 2004. At the time, we seemed a lonely voice, but now virtually every major government and global financial organization has joined in calling for China to modify its currency policies.

U.S. policy now couldn’t be more clear. At the conclusion of the Strategic Economic Dialog, he said, “China’s currency policy is a core issue in our economic relationship. We have indicated to the Chinese in the clearest possible terms that more flexibility in their exchange rate will help China achieve more balanced economic growth, enhance the effectiveness of monetary policy, safeguard the health o the financial sector, and promote over time and orderly reduction of external imbalance.”

Federal Reserve Board Chairman Bernanke was even more blunt, telling the Chinese that their currency policy is “an important distortion in the Chinese economy, namely the effective subsidy that an undervalued currency provides for Chinese firms that focus on exporting rather than producing for the domestic market. A decrease in this effective subsidy would induce more firms to gear production toward the home market.”

Vital signs
NAM weighed several approaches toward resolving this serious economic dispute, including legislation advocated by some. But the reality is, Congress cannot legislate Beijing’s economic policies. Fundamentally, we support Secretary Paulson’s approach toward China, seeking to get the Chinese leadership to see faster movement on currency and other economic distortions as “win-win” steps in their own domestic economic interest – and necessary to head off what could otherwise be a debilitating set of trade actions that could cascade around the world to everyone’s detriment – especially China’s.

As I noted earlier, the NAM’s first meetings with Administration officials produced results. We expect another meeting early this year, during which we will hear about the progress achieved at the first session of the Economic Dialogue, as well as the next steps to be taken. And from our side, we’ll continue to provide straightforward input about how U.S. manufacturers can face the Chinese challenge.

I firmly believe this group will make a long-term contribution toward shaping U.S. policy toward China. The group’s members are intent on working closely with Secretary Paulson on currency and other trade and manufacturing-related issues.

The U.S.-China trade relationship is vital to our country and our future. China presents us with some serious challenges, but also some great opportunities, not just for manufacturers in the United States but for all America’s citizens. Our goal is to see to it that this relationship provides mutual benefits for the people and businesses of both nations.

John Engler is president of the National Association of Manufacturers, whose mission is to enhance the competitiveness of manufacturers by shaping a legislative and regulatory environment conducive to U.S. economic growth and to increase understanding among policymakers, the media and the general public about the vital role of manufacturing to America’s economic future and living standards. Visit: www.nam.org.