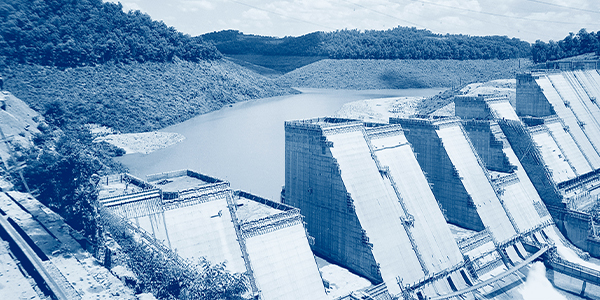 The Tennessee River is a silver ribbon of economic vitality in the Tennessee Valley region, providing power for electricity, water for drinking, beauty and recreation for residents, and a road on which barges and other vessels transport essential raw materials.

Subduing the river, however, took an act of Congress, for it was here in 1933 that President Franklin Roosevelt brought his New Deal to life with the creation of the Tennessee Valley Authority. The seven decades since have been a powerful testament to how natural resources, properly harnessed, can invigorate a collapsed economy.

A tempestuous waterway to tame, the 652-mile Tennessee River only aggravated the gloom of the Depression. Periodic flooding had badly eroded a region whose economic stability depended wholly on agriculture. The Tennessee Valley Authority Act, championed by Senator George W. Norris of Nebraska, was enacted to develop the hydroelectric potential of the region and put thousands of people to work.

TVA made possible not only cheap electric power but also low-cost housing, reforestation, restoration of eroded soil, and improved navigation and flood control. As the river and its tributaries began to run clear instead of brown, this once poverty stricken area of the southeastern United States blossomed into a growth corridor.

In the category of economic revitalization, TVA has been described as the most revolutionary of all the New Deal programs. “TVA was an experiment,” says TVA Chairman Glenn L. McCullough, Jr. “History has proven that the experiment worked, and both the valley and our nation are benefiting enormously from the work TVA is doing.”

McCullough considers TVA’s system of 49 dams – one of which is named for Senator Norris – to be “one of the most significant engineering accomplishments of the 20th century.” Its construction feats aside, TVA’s contributions to the Tennessee Valley have been worth their weight in gold. The once impoverished Tennessee Valley now is home to an enviable blend of high-tech entrepreneurs and traditional manufacturers, earning the nickname “Detroit South” in recognition of major companies such as Saturn, Nissan and Toyota which have built automobile factories here to take advantage of the region’s economic strengths. More than 200 automotive suppliers have established operations in the area as well.

How it operates
With its focus on producing power efficiently and delivering it reliably, each year TVA generates about 152 billion-kilowatt hours of electricity to meet the needs of some 8.3 million people. TVA serves customers across 200,000 square kilometers (80,000 square miles) of the southeastern United States, including most of Tennessee, and parts of Alabama, Georgia, Kentucky, Mississippi, North Carolina and Virginia.

Initially, TVA was funded by congressional appropriations that eventually totaled about $1 billion. In 1959, TVA began repaying this investment and since has returned more than double the initial congressional appropriation. Noting that TVA continues to pay back about $20 million a year, plus interest, to the United States Treasury, McCullough says, “We want people to know that TVA does not operate with taxpayer money.”

On the contrary, TVA is entirely self-financing and receives no funding from taxpayers. “TVA is a government corporation that is run like the best of private industry,” says McCullough, explaining that TVA’s entire budget comes from the wholesale power it provides to distributors and large industrial customers. These customers purchased about $6.8 billion worth of electricity from TVA last year.

Besides funding the TVA power program, these revenues also support TVA resource stewardship and economic development activities in the valley. TVA is a major source of environmental research, water quality monitoring and sustainable land management along the Tennessee River system – the nation’s fifth-largest. “The amount of flood damage TVA prevents is incredible,” says McCullough. Moreover, about 50 million tons of commodities are ferried along the river each year by barge – reducing wear and tear on the region’s highways – the equivalent of more than two million truckloads a year.

To fulfill its far-reaching responsibilities, TVA employs 13,000 people to operate its power system and administer its resource stewardship and economic development activities in pursuit of six strategic objectives. These include providing affordable electric power, improving quality of life through management of the Tennessee River system, providing leadership for sustainable economic development, continuing a trend of debt reduction (TVA reduced its debt by $610 million in 2001), and strengthening relationships with stakeholders.

TVA produced about 62 percent of its power from coal-fired plants in 2002, delivering power through a 17,000-mile network of high-voltage transmission lines to 158 local utilities. McCullough says nine of TVA’s 59 coal-fired generating units set continuous-run records during the past fiscal year. “We have a staff of high achievers, constantly paying attention to maintenance and equipment to make sure everything is operating properly,” he says.

Thirty percent of power was generated from nuclear plants, of which TVA operates three: Browns Ferry, near Athens, Ala.; Sequoyah, near Soddy-Daisy, Tenn., and Watts Bar, near Spring City, Tenn. Watts Bar has one of two units in operation, Sequoyah has two units in operation, and Browns Ferry, one of the 10 best performing nuclear plants in the country, has three reactor units, two of which are currently in operation. One of Browns Ferry’s reactors taken off line in 1985 is being recovered – or rebuilt – at a cost of $1.8 billion. The five-year project will be completed in 2007, at which time it may be the first reactor brought online in the United States in the 21st century.

Eight percent of TVA power was generated from hydroelectric dams. With rainfall a major factor in their efficiency, McCullough is hopeful that a four- to five-year drought in the valley may soon be over. TVA’s other power sources include gas- and oil-fired combustion turbines, used primarily during times of peak demand.

Through its Green Power Switch program, TVA also generates electricity from renewable sources that include 14 solar systems, a wind farm with three giant turbines, and two sites that produce power from methane gas released by the natural decomposition of landfill waste. These renewables round out a diverse range of power sources for the nation’s largest public power provider and support the National Energy Policy recommendation for diversity of generating sources.

As an environmental steward, TVA manages one of the most aggressive Clean Air for Clear Skies strategies in the United States, investing $433 million last year alone to reduce emissions from its coal plants. McCullough says the construction of 18 selective catalytic reduction systems at these plants will remove up to 80 percent of nitrogen oxide (NoX emissions). The TVA board also has approved $1.5 billion for scrubbers that will remove 85 percent of coal-fired sulfur dioxide (So2) emissions.

“TVA is in the midst of one of the most aggressive emissions reductions programs in the country,” says McCullough. “We are spending $1 million a day until the end of the decade on coal fired plants as part of our commitment to cleaner air and clear skies in the Tennessee Valley and the nation.”

Because more than four million people depend on the Tennessee River for fresh water, TVA also works closely with each state and the United States Army Corps of Engineers to ensure water quality. “We have a responsibility to protect both water and land resources throughout the Tennessee Valley,” McCullough says.

Since 1995 TVA economic development assistance has helped create or retain more than 260,000 jobs in the Tennessee Valley. “Because the Tennessee Valley is so resilient, our region has suffered less from the overall sluggishness of the economy,” says McCullough. “Much of the South’s agricultural base has moved to automotive, steel and aerospace, creating a more diversified economy. This has led to power demand that has increased an average of 2.5 percent a year.”

By emphasizing teamwork among its own employees and partnerships with those it serves, TVA is achieving excellence in both business performance and public service. “We’re in business to serve and we think our policies serve the economy and consumer well,” says McCullough. “We’re constantly measuring our work to ensure that we’re delivering the best possible value to the people and businesses who depend on us.”