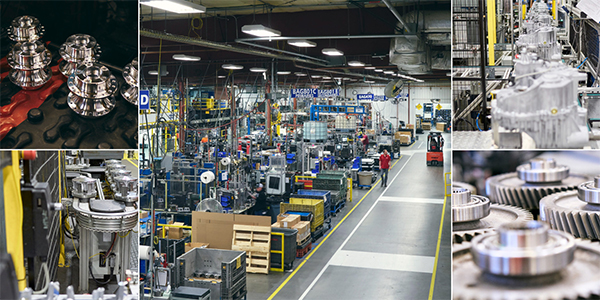 TEAM Industries, Inc., of Bagley, Minn., is a real team in two senses of the word. First, it is a group of five manufacturing facilities located in rural towns in Minnesota. Second, it is a collection of about 1,200 highly skilled employees and five plants that, taken together, measure about 516,000 square feet. Like any team, this combination of companies has a common goal: surpassing the competition to deliver solutions for power-trains and drive-lines in a variety of vehicle types.

TEAM was the dream of founder Don Ricke who, in 1967, established Motek Engineering and Manufacturing in a 5,000-square-foot site in Cambridge, Minn. Machining high-tech components was the original goal set by Ricke for himself and his 10 employees. Two developments put Motek in the forefront of its market in the early 1970s: The emergence of CNC techniques in manufacturing, and the popular demand for snowmobiles. The company developed a mutually beneficial relationship with Polaris, one of the nation’s largest manufacturers of snowmobiles, all terrain vehicles (ATVs), motorcycles and personal watercraft, and Polaris remains a loyal customer to this day.

Later in the decade, Motek saw new business open for itself in providing components for agricultural, automotive and off-road vehicles. It formed another long-standing relationship with Dana Corporation, one of the leading automotive suppliers; as in the case of Polaris, Dana remains a TEAM “member” to the present day. The Motek-Cambridge plant that started it all now measures 130,000 square feet.

By 1984, says David Ricke, son of Don Ricke and now TEAM’s chief executive officer, the business had grown so much that Motek needed additional capacity. Hence, it opened a new facility in Audubon, another rural Minnesota town. Audubon Engineering and Manufacturing now measures 95,000 square feet and employs more than 250.

The growth didn’t stop there. In 1992 a third factory was opened in Don Ricke’s hometown, Bagley, Minn. Product Research and Development, Inc. functions as TEAM’s product engineering center as well as TEAM’s headquarters. In 1994, Park Rapids, Minn., became home to the fourth factory, Straight River Manufacturing. It recently finished a 48,000-square-foot addition bringing its total space to 120,000 square feet. And in 1995, DL Manufacturing in Detroit Lakes, Minn., was added to meet the growing demand for quality die-castings.

As Tony Passanante, director of marketing and product development, puts it, TEAM “evolved from a machine shop to producing transmissions for all-terrain vehicles. Then we evolved again to designing and supplying power-train solutions for customers.”

This constant expansion and evolution is one sign of how successful the TEAM approach has been. Passanante says, “Our advertising slogan is that TEAM is ‘your partner in power-train solutions.’ We have the ability to take in OEMs’ vehicle models and fit our products into their models.”

Another key to TEAM’s winning attitude is its continued commitment to state-of-the-art manufacturing. “We were into CNCs from the time they were introduced in the mid-1970s.” says David Ricke. “We invest heavily every year in our manufacturing. Last year alone, we spent $15 million on various technologies at different plants, including automation, robotics and cellular manufacturing technologies.”

One example of TEAM’s cutting-edge manufacturing investments is the Audubon unit’s purchase of five Phoenix 175 CNC Hypoid Gear Cutting machines. This equipment allows Audubon to produce spiral bevel as well as hypoid gear sets with amazing accuracy and repeatability. Another application of TEAM’s high-tech investments is its semi-solid aluminum forming technology that is presently being utilized to make parts at DL Manufacturing, the corporation’s die-casting facility.

The semisolid forming process is a state-of–the-art method of molding aluminum parts that yields products having superior properties for applications requiring high integrity and strength. The process involves heating specially cast billet sections of aluminum alloys to a working consistency similar to peanut butter. The soft metal is then injected into the closed die of a modified die-casting machine to yield a product that can be machined or further processed into a finished part. The semisolid process is often specified for parts that require high strength or pressure tight applications such as suspension parts or hydraulic brake components. An additional advantage is that production rates can approach those of less critical processes, making the semisolid technology cost competitive for many high- volume applications.

A further example of commitment to customers is TEAM’s eye on the future. Polaris is expanding its product line to include motorcycles, “and we’re doing transmissions and drive-lines for engines,” says Ricke. “There are also some other customers we’re trying to cultivate with similar products, transmissions and differentials.”

Looking at TEAM’s individual divisions, Audubon Engineering, the company’s second plant, focuses on gear manufacturing. Exem-lifying TEAM’s commitment to state-of-the-art manufacturing, the facility features five Gleason Phoenix CNC hypoid machines, providing fast output of high-quality, spiral-bevel gears. Its layout is based on the principle of cellular manufacturing, which reduces lead times, inventory and handling – which in turn slims down the cost to the customer. This plant also includes Fassler honing machines, which hard-finish spur and helical gears for the purpose of making high-quality, low-noise gears; and a state-of-the-art metallurgical testing laboratory, which ensures that material and heat treatment meet TEAM’s customer print specifications.

DL Manufacturing uses a process for semisolid moldings that carries three clear benefits: less entrapment of air and oxides; less shrinkage and hot tearing; and extended tooling life. All of these benefits are due to the process’ calmer and less aggressive casting process. After a recent retooling, the facility is capable of casting a range of semisolid molding alloys, further expanding its capacity to meet and exceed its customer’s needs. DL’s facility also includes a Buhler die-casting centers, which it considers the backbone of the operation; a quality department that ensures a continuous improvement in the castings that emerge from the plant; and a trimming department that promotes efficient workflow and on-time delivery.

Motek, the facility that gave birth to the company that eventually became TEAM, centers its work around providing customers with quality machined parts on time. It specializes in drive train components made to customer specifications, but it also produces a wide variety of other machined parts, using state-of-the-art production equipment and technology in all phases of quality control and manufacturing.

Among the parts that come out of the Motek facility are axles and drive shafts for agricultural, automotive and industrial applications. The plant includes a number of CNC machining centers, which make multiple parts on fixtures designed and built for Motek’s tooling department. Motek employees work with customers as what the company calls “partners for excellence,” dedicating all of its resources to providing continuous improvement in quality, cost, delivery and total customer satisfaction.

The emphasis is on quality and speed at the Straight River Engineering plant. It specializes in high-speed production machining of aluminum and cast-iron materials, using the latest technology in CNC machining, robotics and automatic gantry loaders. It recently added a 22-station linear pallet pool, which reduces setup times dramatically and, thus, lead times to customers. The plant houses twin spindle lathes with an auto gantry loader, alllowing the facility to achieve the production levels of two machines with only one operator. It also has an automated cellular manufacturing area, with a robotic loader coupled with electric closed-loop automatic feedback gauging.

The commitment to research and development is plain considering the presence of the Product Research and Development (PRD) division. It was originally incorporated in 1986 as a precision machining, design engineering and product development company to service a variety of large manufacturers; it now serves as the engineering resource for all the sister plants in TEAM.

PRD now boasts 260 full-time employees in five departments in its 100,000 square feet of manufacturing and office space. The latter includes the assembly department, which puts together more than 180,000 Polaris ATV transmissions a year. The engineering department has 30 employees, including mechanical design engineers, computer-aided design (CAD) designers, testing and documentation personnel. PRD’s machining department has seven lathes and 13 mills, along with a staff of 36; its mills are highly automated and are manufactured in Japan. The prototype department (where models are made) is located across the street from the main PRD facility in Bagley; it provides customized projects for the sister plants and for Polaris Industries. The research and development department has two mechanical design engineers, two engineering technicians and one design drafter.

But this division’s commitment to its function doesn’t stop with staff and equipment. It also provides an engineering and technology scholarship for students in Bagley and in the nearby school districts of Clearbrook-Gonvick and Fosston. Its mission follows closely along with Don Ricke’s desire to upgrade the rural Minnesota area in which TEAM is based: It’s meant to provide an opportunity in this field specifically for rural students, in the hope that they will pursue a degree in an engineering-related field, and return to work in this rural area. These scholarships are renewable for up to four years of continuing education in this field.

Passanante adds, “Our research and development department is working on products and product applications that will advance the state of power transmission technology in our markets. Among those are applications for continuously variable transmissions. We’re also looking at different hydrostatic systems and replacements for hydro-static systems.”

Future development means more than just products at TEAM; it means expanding the customer base and exploring new markets, as Ricke relates: “We’ve gotten some orders from John Deere, products for their tractors and industrial equipment. We’re now working with Club Car on their golf carts and people movers.”But TEAM isn’t solely interested in large, big-name customers. Ricke has also directed the company to focus on smaller firms, both commercial and industrial- “small-volume companies that other suppliers would ignore.” He is also seeking to develop an international business for TEAM. “We’ve looked at some vehicles being developed in Third World countries, and we see a market for our transmissions for both autos
and industrial vehicles in that area of the world. Europe may have some potential for us, too. We’re connecting with a company in England that makes diesel-powered vehicles.”

TEAM has consistently led the league in manufacturing and in all the work that goes into creating quality products. Its employees – who, through the company’s Employee Stock Ownership Plan, own 30 percent of the firm – remain dedicated to its customers and meeting their needs. This is what TEAMwork is all about.