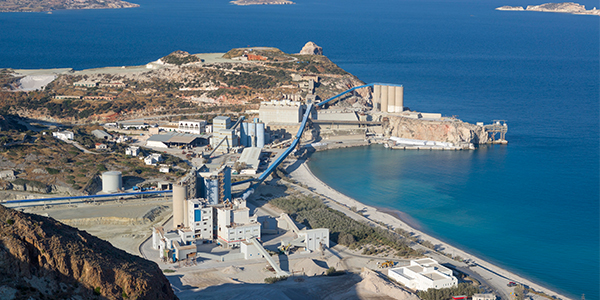 You may not know what white industrial minerals are, but it’s a good bet that you see them every day – from the pigment in the paint on the walls around you to the strength it adds to the plastic bag in the trashcan under your desk.

The group of white industrial minerals includes kaolin and ball clay – the white, soft, powdery clay that’s used both in the coatings, rubber and in the ceramics industry – and calcium carbonate, which is also known as white chalk and is critical in the production of paints and plastics.

And the worldwide leader in the field is a French company called Imerys, a global giant with more than 280 industrial and sales sites in 36 countries. Worldwide, the company, with nearly 14,000 employees, posted annual revenues in 2004 of more than $2.8 billion.

Here in North America, the company is particularly focused on performance minerals like kaolin, ball clay, feldspar and calcium carbonate, which are found in great abundance here, especially in the American South. Worldwide, Imerys is number one in the sale of kaolin, number one in minerals supplied to breathable polymer films and the Americas leader in ground calcium carbonate.

Cradle-to-grave
“It’s a global business,” said Joel Zazyczny, the director of marketing and business development for Imerys’ operation here in North America. “And we are the largest supplier of performance minerals to the North American market.”

Even though Imerys is hardly a household name, its products are used from cradle to grave – literally. Minerals mined by Imerys here in the United States are a major component of the film that’s used to promote breathability and comfort in baby’s diapers, while marble, that the company mines in the clay belt of central Georgia, was purchased by the U.S. Department of Veterans Affairs to make the headstones at military cemeteries across the nation.

In between, Imerys manufactures the finely ground marble that’s used to line many of the playing fields at high schools and professional venues across America, it produces the white aggregate that goes in swimming pools, and produces minerals that improve and extend household paints and improve impact strength in vinyl siding.

Imerys does all this with little fanfare. The company, which is headquartered in Paris, unveiled the new name in the year 2000, after a string of consolidations that left that company with operations in many of the world’s richest regions for kaolin and other performance minerals, from central Georgia to the Cornwall area of England to deposits from Brazil to Australia.

The company’s history is a long series of global consolidations. Here in North America, much of the timeline dates back to the establishment of Anglo-American Clays back in 1955. Some of the other companies that form the deep roots of Imerys include Thompson Liming, Sylacauga Calcium Products and Georgia Kaolin, among several others. By the late 1990s, many of the units operated under the name ECC (for English China Clays) International and then IMETAL before the industry consolidation that created Imerys.

In reality, though, the story of these companies goes back not decades but eons, to the formation of rich mineral deposits around the globe. In the United States, the company’s presence is especially strong in the Deep South.

Kaolin – also known as china clay – is a hydrated aluminum silicate crystalline mineral formed over many millions of years by the hydrothermal decomposition of granite rocks. It is characterized by its fine particle size, plate like or lamellar particle shape and chemical inertness.

Emphasis on R and D
Calcium carbonates are composed of the crystalline mineral, calcite, which occurs naturally in the form of chalk, marble or limestone. Chalk is usually fine textured, and varies in color from deposit to deposit. Imerys, has established its North American headquarters in the Atlanta suburb of Roswell. Its main quarry and plant for clay is located in Dry Branch, Ga., and it has other major facilities in Sylacauga, Ala., Marble Hill, Ga., and Baltimore, Md. Additionally, Zazyczny noted that there are now facilities in Arizona, New York and Mexico. He said the company spends quite a bit on research and development, with one major lab at the Dry Branch site focused on paints, coatings and ceramics and another that deals with polymers in Sandersville, Ga.

Zazyczny also noted that because the worldwide market for raw materials has so many ups and downs – usually tied to the fortunes of the broader global economy – that developing new uses for those minerals has become a critical part of what Imerys does. “Imerys has been developing calcium carbonate for film applications – the widest use in film would be as a cavitating agent, like in diapers,” Zazyczny said. “The mineral creates micro pores in the film that allows the diapers to breath so the baby’s behind stay cool and dry. Calcium carbonate is also utilized in the polypropylene labels to promote opacity upon stretching. An example of its use would be soda bottle labels.

In late 2002, not long after the formation of Imerys, the company divided itself into four business units each of roughly equal size – with the goal of maximizing the potential of each one. The specialty minerals and pigments for paper divisions each have roughly 28 percent of the business, while the building materials and refractories and abrasives unit each have about 22 percent.

The minerals mined and marketed by Imerys have myriad other uses. You may find them in many lawn and garden products that are sold in most of the leading retailers, including Wal-Mart and Lowes, that include dolomitic limestone products that customers who live in regions with acidic soils can use to grow greener and healthier lawns.

Performance minerals from Imerys are frequently used in rubber, where they offer good processing, chemical resistance, barrier properties, good white color and a level of reinforcement dependent on their particle size. In addition, ground calcium carbonates are used as extenders and fillers in a wide range of building and construction products. “We’re continuing to explore the PVC market with respect to vinyl siding,” Zazyczny said. “We’ve just introduced a product called Infusion(tm). It improves impact strength, and also reduces the cost of the formation due to the high cost of PVC resin and impact modifiers.”

It’s just one more example of what Imerys does – taking the material that’s been in the ground for centuries, and figuring out new ways to use them today.