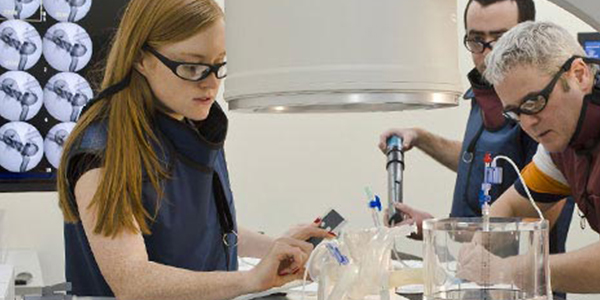 With America’s frontier deemed officially closed at the end of the last century, discoveries, and the revolutionary changes they forced, would have to be undertaken at another level, through the vast stretch of human terrain still to be tapped. This road would, in the next century, take researchers and scientists into the uncharted territory of medical innovation and result in breakthroughs as life changing as the unearthing of gold.

Such a quest was launched more than 30 years ago by pioneers such as John Abele, co-founder of Boston Scientific (first known as Medi-tech), who labored to develop alternatives to traditional surgery, and Andreas Gruentzig, who performed revolutionary work in the as-yet-unknown procedure commonly called balloon angioplasty. As Medi-tech pushed the boundaries of less invasive medicine, it grew to become Boston Scientific, a $2.7 billion worldwide entity with 12,000 employees, all dedicated to achieving breakthroughs in the treatment of heart disease, the number one killer of men and women.

Minnesota is the home of the Boston Scientific Cardiovascular Group, where 2,600 employees in two facilities research and develop medical devices that treat disease in the coronary and peripheral arteries. Its mission, quite simply: to improve the quality of patient care and the productivity of health care delivery through the development and advocacy of less invasive medical devices and procedures. Once requiring months of recovery, heart surgeries have been transformed through Boston Scientific’s daily commitment to improving quality of life.

“Our people work hard to develop products; it is their expertise and commitment that helps to maintain our quality,” remarks Communications Director Nan Upin-Murphy.

Evolution and revolution
Products developed by the Cardiovascular Group are utilized at both the diagnostic and crisis level and, in addition, have revolutionized angioplasty, what now has become practically a routine procedure. The devices and procedures are by now well embedded in medical vernacular: a catheter with a small inflatable balloon on the end is positioned within the narrowed section of the artery. The balloon inflates and pushes outward against the artery wall, reducing the narrowing until it no longer interferes with blood flow. The balloon then is deflated and removed from the artery. This surgical innovation was improved upon with the invention of a stent – a small, latticed, metal scaffold. Introduced into the blood vessel on a balloon catheter, the procedure works in the same manner: The balloon inflates, causing the stent to expand and press against the vessel wall. The stent remains in position after the balloon has been deflated and withdrawn.

To achieve the highest level of success in these and other coronary surgical procedures, Boston Scientific has developed a product portfolio that is itself proof of the continual effort put forth to push beyond the next generation. The Cardiovascular Group (originally known as Scimed) has designed and perfected a strong base of core cardiology and peripheral products, including balloon catheters, guide wires, guide catheters, diagnostic catheters and stents. Its proprietary technologies include:
• Cutting Balloon(tm) Device that dilates coronary artery stenosis by means of microsurgical dilatation. The Cutting Balloon Device has three to four atherotomes mounted longitudinally on the outer surface of the balloon. When the balloon inflates, the atherotomes first score the plaque, and then the balloon compresses the plaque against the artery wall.

Since helping to pioneer the field of heart disease treatment, the Cardiovascular Group’s highly innovative solutions have been used in the more than one million angioplasties regularly performed in the United States, in what has become the most common medical procedure in the world.

Opening a new world of treatment
Boston Scientific Cardiovascular Group continues to push into new frontiers with leading edge technology. Among its newest innovations is the development of the TAXUS paclitaxel-eluting stent, one of the first drug-eluting stents. Preliminary, six-month test results have demonstrated both safety and efficacy in reducing coronary restenosis. With results consistent with those of other TAXUS trials and in line with expectations, the company made its announcement at the annual Transcatheter Cardiovascular Therapeutics symposium in Washington, where the drug-coated stent was hailed as a breakthrough in inhibiting the recurrence of restenosis.

As Upin-Murphy explains, Boston Scientific created this stent using a specially developed polymer. Clinicial trials, she adds, indicate that this drug-coated stent will deter restenosis with a recurrence rate of as little as 0 to 5 percent.

“It is extremely promising,” she says. “Drug-coated stents will transform how cardiovascular disease is treated.”

Pervasive breakthroughs For less invasive medicine
Transforming the industry is where Boston Scientific excels. Its history began in the late 1960s when Abele partnered with Pete Nicholas to form Medi-tech, Inc., a research and development company focused on creating alternatives to traditional surgery. Its first products were a family of steerable catheters introduced in 1969 and used in some of the first less-invasive procedures. Versions of these catheters are still in use today and their invention along with an extensive product portfolio, has allowed Boston Scientific to grow into the world’s largest medical device company dedicated to less invasive therapies.

Along the way, the organization interacted with many people on a similar mission. These individuals included physicians such as Andreas Gruentzig, who revolutionized the balloon catheter, working evenings in his kitchens building many versions of his device using tiny bits of rubber, thread and epoxy glue. Gruentzig contacted Medi-tech in 1974, expressing interest in obtaining the company’s steerable catheter for use with his balloon model; four years later the first percutaneous transluminal coronary angioplasties – or balloon angioplasties – were performed in America. It would not be the first time that physicians utilizing Medi-tech’s highly advanced technology would lead to the invention of life-saving devices.

At the same time, Scimed, in 1971, had been founded by six entrepreneurs from Litton Industries, specializing in oxygenators and other devices for cardiovascular surgery; the company’s line of products soon expanded into angioplasty, whereupon Scimed became a leader and innovator in the market. The company merged with Boston Scientific in 1995.

These histories have been compiled in a book by Jeffrey L. Rodengen called “The Ship in the Balloon” a narrative of Boston Scientific’s evolution and the development of less-invasive medicine. The book opens on a description by Dr. Charles Dotter, also a surgical pioneer, who described a ship in a bottle “to symbolize the finesse and determination required to reach remote organs through tiny holes.”

Boston Scientific’s “ship in a balloon symbol,” Rodengen wrote, “is the medical analogy of the ship in the bottle” and represents “the challenging task of diagnosing and treating damaged organs or vessels through tiny openings from a remote location … the essence of minimally invasive procedures.” Such practice, he continues, “is a fantastic voyage of adventure, exploration, innovation and constant discovery.”

In this way, the frontier for Boston Scientific Cardiovascular Group is never closed and always represents a constant drive for innovation, quality and commitment.