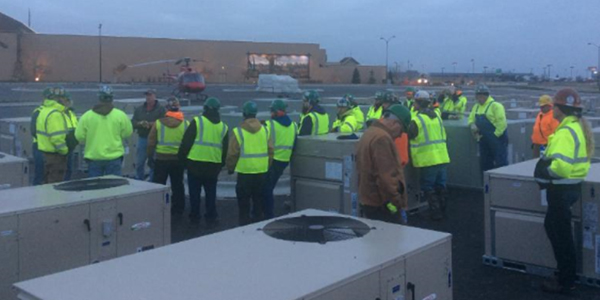 Founded in 1906, The Waldinger Corporation is a full-service mechanical, sheet metal, electrical, building automation and services contractor operating primarily in the Midwest and southeastern regions of the United States.

As Waldinger approaches the century mark in business, the company’s management provides two reasons for its enduring success: Waldinger’s employees and its determination to stay at the forefront of technology.

Waldinger has made a long-term commitment to its employees and they have repaid the company with loyalty and hard work. “Waldinger has always been able to attract and retain enormously talented individuals,” says Matt Larson, Waldinger’s director of business development. “Our sheet metal supervisor, for example, is the third-generation family member to work for Waldinger. On average, Waldinger’s management base has 15 to 25 years of experience working for the company.

“In addition, during the entire history of the company, Waldinger has always kept up with the latest in technology.” The most recent example of Waldinger’s dedication to maintaining its technological advantage is the coil line it maintains to fabricate sheet metal. The coil line allows for computer controlled ductwork with acoustic lining and TDC connectors. The coil line also is outfitted with a plasma-cutting table that is computer-controlled and is connected directly to the company’s CAD drafting system to cut sheet metal parts. Moreover, the coil line can fabricate duct up to 48 inches in diameter. “As far as I know, we’re the only contractor in the Midwest that possesses such a coil line,” notes Larson.

Emphasis remains on building relationships
While Waldinger’s employees and its commitment to technology will continue to form the foundation of its success, going forward the company also wants to place emphasis on building long-lasting customer relationships and on maintaining its ability to offer single-source solutions. Waldinger wants customers to be able to turn to the company during the entire lifetime of a project. To that end, the company has bulked up its capabilities in order to offer everything from design, manufacturing and installation to maintenance and repair. “We want to have lifetime relationships with customers and our single-source capabilities will allow us to do just that,” says Larson.

Such importance is placed on customer relationships because approximately 90 percent of Waldinger’s projects represent repeat business. “We’re obviously doing a great job if practically every one of our customers keep coming back,” says Larson.

Waldinger’s professed aim to achieve single-source capabilities isn’t just rhetoric. In June 2001, the company acquired Brown Brothers Electric, a large Midwest electrical contractor with almost 50 years of experience. According to Larson the transition “has gone smoothly.” The Brown Brothers’ expertise will play a crucial role down the line as Waldinger attempts to garner more design-and-build business.

An extensive network of building projects
Waldinger has its headquarters in Des Moines, Iowa, where it has a 70,000-square-foot plant and a 40,000-square-foot office building that administers the work of all the Waldinger facilities around the country. The company has 12 other locations spread out across the Midwest and Southwest. The Wichita, Kan.; Kansas City, Mo.; Omaha, Neb.; and Des Moines locations all offer full contracting services. The Coffeyville, Kan.; Atlanta, Ga.; Springdale, Ark.; St. Louis, Mo., and the Florida locations in Ft. Lauderdale, Orlando, Ft. Meyers, and Tampa offer repair and maintenance services only.

Developers, property managers and architects form the bulk of the company’s customer base. Waldinger can work on industrial, commercial or residential projects. Major projects the company has worked on in the past include the First National Bank Tower in Omaha, Neb.; the Monsanto Seeds Grain Analysis Facility in Ankeny, Iowa; Iowa State University’s Howe Hall in Ames, Iowa; the Federal Courthouse Annex in Des Moines, Iowa; the Children’s Hospital in Omaha; the University of Nebraska Medical Center in Omaha; the Boeing Assembly Support Building in Wichita, Kan.; and the Louisiana Superdome in New Orleans, La.

Single-source capabilities
Waldinger was founded in 1906 by Harry Waldinger, an Austrian immigrant who arrived to the states by way of Ellis Island. The company was a small operation until World War II when it was called on to undertake two large sheet metal projects at military bases in Missouri. Each of these projects were 10 times larger than anything else the company had ever done. After the successful completion of the projects, the company was tasked to work on many more projects during the war. “The projects during the war are important milestones in the company’s history,” says Larson. “We’ve just kept growing from there.”

Waldinger’s maintenance, repair and technical support services keep its customers’ systems operating at optimum efficiency. The company offers repair and replacement, customized maintenance programs, performance contracting, indoor air quality services and “R”-stamped required repairs and alterations. Waldinger also can develop service plans for buildings, and can work with customers to improve the operation of their buildings and to lower costs. Whether the building is old or new, large or small, Waldinger can meet the needs of customers.

Waldinger’s manufacturing shops in Des Moines, Omaha and Wichita are staffed with the skilled mechanics and modern tooling necessary to fabricate nearly any product out of sheet metal or pipe. Most of the ductwork and piping the company fabricates is then installed by its construction divisions; however, Waldinger also can custom fabricate ductwork and piping for installation by others. “Our sheet metal capabilities are well known throughout the Midwest so we end up making and selling a lot of our products to other contractors,” notes Larson. “For instance, we’ve manufactured plenums that go on top of furnaces for some of our customers in the furnace industry.”

In the past, the company also has built manufacturing machines, tanks, dust collectors, kitchen equipment and artistic sculptures. Waldinger also has the tradesmen and equipment to weld, roll, bend, laser cut and punch metal to create the product its customers need.

The Quality Manufacturing division of Waldinger manufactures intricate pieces in carbon, stainless steel and aluminum for big-name OEMs. One such OEM is John Deere, which installs in its cotton-pickers pieces supplied by Waldinger.

Waldinger’s engineering team includes licensed, mechanical professional engineers and a support staff of other degreed engineers and technicians. The synergy between professional designers and experienced construction detailers and estimators results in cost-effective designs for customers.
“We have a number of strengths but our engineering skills, the amount of time we’ve been in business and our single-source capabilities are particularly noteworthy,” explains Larson. “We like to take ownership of everything we do – from the engineering stage all the way through to installation.

An Excellent Product and Customer Mix
According to Larson, the company’s diverse product mix has allowed it to weather economic downturns. The sheet metal, mechanical and service businesses each account for one-third of its revenue. The growth of the service side of the business usually “climbs at a steady rate and is normally recession proof,” says Larson. “The construction side of the business is more up and down. With this mix we’ve been able, for the most part, to insulate ourselves from the vagaries of the economy.”

By expanding into the Southwest area of the country, the company also has been able diversify its customer base. For Larson, the reasons the company has opened up maintenance and repair offices in the Southwest are clear: “There’s a lot of population turnover in Florida. It’s estimated that a full one-sixth of the U.S. population will end up living at some point in their lives in the Sunshine State. The warm climate in the region also helps drive the HVAC market. Because of the heat, equipment such as chillers will run a lot harder down there.”

Waldinger is bidding for several substantial projects in the Midwest, especially in Iowa. The Des Moines area in particular is going through a significant revitalization building program that will include a new event center and a large 2,000-acre shopping mall known as the Jordan Creek Mall. The United States Department of Agriculture also is planning a significant project of its own. The USDA intends on constructing laboratories in Ames, Iowa.

“The fact that we’re serious contenders for these huge projects means that we can pretty much take on any size project,” says Larson. “Our formidable capabilities coupled with our financially-sound status means we can bond and work on pretty much anything.”