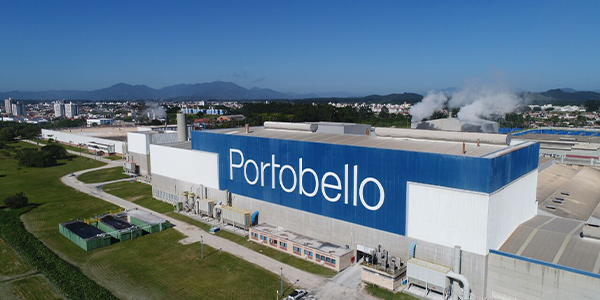 Some things just can’t be exclusive, no matter how expensive they are. Take tiles, which often are mass produced as an attractive aesthetic backdrop in many homes and businesses. Portobello, a Brazilian ceramics producer, strives to make this common product into something exclusive. To do that, the Tijucas, Brazil tile producer, renews its style portfolio every six months. This reduces the chances that every house in a region that uses Portobello tiles looks the same inside.

The guidelines for the different styles are the only things that don’t change. Portobello has four lines of products: Basic, Classic, Rustic andÿContemporary. Within those lines, there are various styles and brands. For example, as part of the Contemporary style, Portobello currently offers the following brands: Ecowood, City, Touch, Sense, Next and Glass. But they can all change in the next semester. And even if the general models don’t change, the colors and patterns will.

As would be expected, Portobello’s are among the most expensive Brazilian tiles. “Our strategy is to concentrate on the upper class consumer,” explains the marketing vice-president, Edson Moritz. This might mean that Portobello sells fewer tiles than its local peers. However, that doesn’t mean less revenue. Actually, according to Moritz, Portobello has sales figures similar to its main competitors, while producing almost half as many tiles as them. It reported a net revenue of 229.7m (BRL) in the first semester.

Brazil has always been the main market for Portobello, and has become more important after the recent uptick in the local currency value. Still, Portobello reported revenue of $62m (U.S.) from exports last year. Alone the company accounted for 16 percent of the foreign sales of the whole industry. While China is the biggest market in the globe, Portobello’s biggest buyers outside Brazil are the United States, followed by the Caribbean and the Mercosur, the Southern Cone free trade area.

Therefore, Portobello has felt the impact of the recent decline in home sales in the U.S. But the company has offset the losses in the American market by concentrating on other places, such as the Mercosur and the Middle East, which has become increasingly important. “The whole place is a huge construction site,” Moritz jokes.

However, because of the current valuation of the real vis-a-vis the dollar, Moritz says Portobello products lost competitiveness abroad. The solution was to concentrate more on the local market. “We started to drain the international market cup to fill the local market one,” Moritz says. Yet, the company is still growing its exports and last year these accounted for 51 percent of all the tiles sold. “But this year will probably be different, and 2007 even more,” cautions Moritz.

Notwithstanding, the local market still is where Portobello makes more profits. Portobello has become so dependent on the local market, that its own growth rate has followed that of the Brazilian gross domestic product. For this year, Moritz doesn’t expect Portobello’s growth to exceed 4 percent to 5 percent. The Brazilian economy is expected to expand just below 3 percent.

However, starting next year, Moritz believes the company’s expansion will detach itself from the country’s. This is not because it will concentrate more on foreign markets; Portobello’s plans are exactly for the opposite. The recently reelected Brazilian government has promised aggressive housing initiatives that could boost consumer demand for ceramic tiles. The new policy will have more impact on affordable housing, which isn’t Portobello’s target market. But, as Moritz explains, any construction incentives tend to overflow to the middle and upper classes as well, from which Portobello stands to benefit.

Building sustainability
Portobello takes sustainability seriously. The company has a landmark reforestation program in the areas where it extracts clay to be used in ceramic production. Portobello also makes sure the water used in a certain stage of the production will be available for the next stage. And, after it has gone through the whole process, water is treated to be sent back into nature, virtually clean. All residue created in the water treatment station is fully utilized in Portobello’s production process, so waste is minimized.

Even paper used in the administrative tasks has its proper destination. Used paper is compacted and recycled. Burnt lamps are sent to a company specialized in disposing of them. Broken tiles are ground and reintroduced in the production process.

And, most important, since 2003 Portobello has used natural gas to fuel all of its ceramic ovens. That generates minimal greenhouse effect gases, guaranteeing that the company is doing its part to avoid globalwarming.

The health of Portobello’s workers is another issue taken seriously in the company. The air in the plant is filtered to make sure porcelain particles and toxic gases aren’t contaminating employees. The same is done to gases sent out of the plant. The air inside and outside the company is constantly monitored to make sure everything is working properly.

From sugar to tiles
Curiously, Portobello started off as a sugar mill back in 1944. But, since Santa Catarina isn’t naturally prone to sugar cane production, Portobello was basically a buy and sell company. They acquired the sugar cane from northernmost states in Brazil, processed it and then sold it locally.

With the advent of better transportation and communication systems, the company was bound to failure. So, in the late 1970s, the owners decided they had to diversify their holdings to survive. Among the several industries they entered was ceramics.

In 1977, the cornerstone for Ceramica Portobello’s plant was set. Two years later the factory was producing at full throttle. And in 1981, at a time when Brazilian companies very seldom thought big, Portobello was already selling abroad.

However, the local market promised to be the great driver of Portobello’s growth from the beginning. No wonder: Brazil is the second biggest ceramic tile consumer in the world, second only to China. The country nowadays uses around 440 million square meters of tiles a year. Portobello produces just below 25 million square meters a year.

Since it was part of a broader holding company, Portobello wasn’t required from the start to profit from scale as its competitors. So, from day one, the company concentrated on serving the middle and upper classes. The idea was to create differentiated products so that Portobello wouldn’t be competing in a commodity market.

Portobello’s first creation was called the “Piso Verdao,” or green giant tiles, with a double coating of lacquer. Then, in the early 1980s, the discovery of new materials indicated the possibility of creating ceramic tiles capable of supporting high pressures. Soon, Portobello was marketing “Carga Pesada,” a heavy duty tile.

Around the same time, Portobello began selling one of its trademark products: ceramic marble. It’s a tile that imitates marble’s properties and colors but can be produced inside a factory.

Today, however, Portobello doesn’t concentrate solely on producing anymore. Through its franchise Portobello shop, the company offers and brokers all kinds of services related to tile setting and design. From architects to decide on the best choices for your bathroom to a contractor to set the tiles on the walls and floors, the client can get it all at this one-stop shop. The franchise already has around 80 shops throughout Brazil and is growing in the US.

Portobello America, the U.S. division of the company created in 1990, has also expanded and today has five warehouses. It just recently has started direct sales and the company isn’t committed to only selling Portobello S.A. tiles. “We are becoming more of a commercial and services company,” Moritz says. In this way, Portobello is on its way to be a seller of first quality ceramic tiles, no matter who makes them.