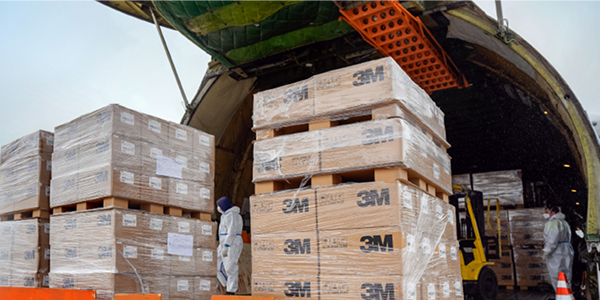 The people at 3M Touch Systems would like to take you through “a day in the life of touch,” a Jetsonesque walk into the future. There, the power of touch would enable the operation of everything from, say, your home’s heating system to its entertainment center.

No longer space-age technology seen only on the cartoon screen, touch technology has been brought to the forefront by 3M Touch Systems. This is how your day would begin: Wake up, touch a screen to shut off the alarm and touch another to turn on the coffee, and yet another to get the sprinkler system going, and maybe another for the shower. Touch screens at the ATM, gas pump, and self-checkout systems at the grocery store would make transactions faster. Perhaps by touching a screen on your car’s dashboard, you can have the garage door open and outside lights activated for you when you pull in the driveway at the end of a long day.

Through the development of inventive touch technologies, and with a global presence, 3M Touch Systems sees its role as one of unique innovator. What sets 3M apart from its competition, however, is its highly recognizable name, its stability and its reputation, says worldwide marketing manager Alice Moran. Employing a culture in which science and imagination meld to their fullest potential, 3M is on the edge of a revolution in the touch screen industry, and it seems the sky’s the limit.

Best in Breed
3M Touch Systems operates under the Optical Systems Division of corporate giant 3M, and was created in 2001 through the acquisition of established touch technology leaders Dynapro and MicroTouch Systems. 3M Touch Systems offers a wide portfolio of touch technologies and touch products that provide ease of integration, responsiveness, and simplicity of use.

Named “The Most Admired Company for Innovation” in 2001 through a readers’ survey conducted by Fortune magazine, 3M has identified the following existing and emerging applications for its touch technology:
• Voting machines: “Every state has started looking to automate their archaic voting systems,” Moran says, “and we believe touch screens will be the choice. This is perhaps the biggest trend and it is happening very quickly.”
• Automotive: The industry is currently looking at ways to integrate touch technology beyond entertainment systems into other dashboard controls.
• Self-checkout: Many retailers have incorporated touch systems into their self-checkout lines; in addition, some of the leading retailers in the country are using 3M Touch Systems’ monitors.
• Gaming: Touch has been prevalent in the bar-top gaming and casino gaming applications for well over a decade. Casino game manufacturers around the world have found touch screens indispensable in providing a richer gaming experience to casino players by enabling the video machines to have many games on-board.
• Industrial: Touch can be applied virtually anywhere on a factory floor. From process automation to quality control, touch solutions are fast becoming the preferred solution. Unlike other input methods, touch screens have no moving parts that could stick or break. Touch-enabled devices provide users with space saving, NEMA sealable solutions for challenging industrial environments.
• Financial: ATMs were at the forefront of adapting touch screen technology for their intuitive ease-of-use and durability in public places. On the stock exchange floor and at brokerage houses, touch-based applications accelerate the trading process while providing on-line trading information quickly and easily.

A World of Touch Technology
3M Touch Systems offers several key technologies in its touch screen and monitor product lines. Included in these is its capacitive technology, ClearTekTM touch screens, which offers a high-endurance solution for applications that require fast and accurate touch performance. The touch characteristics of ClearTek technology are attributed to its transparent overcoat, which increases the physical durability of the surface by allowing it to resist scratches and abrasions. Public access applications include kiosks, ATM installations, point-of-sale, gaming machines, and vending.

There are a variety of options available based on the standard ClearTek capacitive touch screen: TouchPen, ToughTouch, and PrivacyTouch:
• The TouchPen option uses capacitive digitizer technology, supporting both finger touch and pen input. With its tethered stylus, TouchPen supports handwriting recognition, signature and data capture, annotation, or gloved-hand use.
• The ToughTouch option adds a layer of shatter-resistant glass laminated to the back of the sensor. ToughTouch brings touch to industrial or unattended environments.
• The PrivacyTouch option integrates a 3M light control film polycarbonate (LCF-P), which is a thin plastic film containing closely spaced black microlouvers, laminated to the back of the touch screen, providing more confidentiality to banking and security terminals.

Near Field ImagingTM projected capacitive touch technology offers a touch screen solution for applications that require extreme durability in harsh or outdoor environments. A Near Field Imaging touch screen is accurate enough to control equipment precisely, yet is sensitive enough to detect finger touches through gloves. The all-glass construction withstands washdowns, (common in industrial or automotive manufacturing) and is contaminant resistant for factory automation, utilities and mining environments. Near Field Imaging touch screens can be enhanced with TouchSurround graphics for extended touch button capability.

In the way of monitors, the company offers a complete family of MicroTouch™ monitors that incorporate ClearTek™, Near Field Imaging™, or five-wire resistive touch technology to create accurate and reliable touch display solutions. Offerings include CRT monitors, flat panel displays, and flat chassis designs in a selection of sizes. To help ensure safety and performance, all MicroTouch monitors are UL, CE and FCC compliant.

The flagship of the company’s monitor line is its MicroTouch M150 touch monitor. Offered with a choice of capacitive or resistive touch technology, the unit provides accuracy and sensitivity to the user’s touch while offering durability and resistance to contaminants such as dirt, liquids, and harsh chemicals. This monitor, explains Paul Baril, monitor marketing manager, represents a new standard in touch monitors. “The M150 touch monitor was designed from the ground up to withstand the mechanical demands of touch input,” he says. “You cannot retrofit a standard desktop LCD with a touch screen and expect optimal performance under touch input dynamics. The monitor may wobble under touch, or even fall over. We start from scratch and design the best touch monitor possible, then
build it with touch from inception, ensuring maximum utility and performance.”

The Touch Advantage
3M Touch Systems has established manufacturing Centers of Excellence in Methuen, Mass., Milwaukee, Wis., and Vancouver, Canada, and has a number of other offices and locations world-wide. Each center institutes a highly focused, technology-driven approach to manufacturing. Says Fred Elias, 30-year veteran of 3M, “Since the acquisitions, 3M has invested in a new, high tech factory for ClearTek touch screen manufacturing in Methuen and a new, highly automated resistive touch screen manufacturing line in Milwaukee. These substantial investments are indicative of 3M’s commitment to the touch business and 3M’s use of technology and innovation to support world class quality, service, and efficiency.”

Such multi-dimensional support and service has become the foundation of 3M Touch Systems’ drive to be a leading innovator. By taking the power of touch to the next level, 3M Touch Systems intends to become the single most visible and influential player in a new world of touch technology.