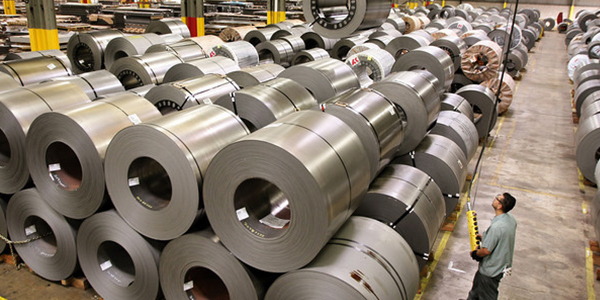 When Olympic Steel, Inc., was founded in 1954, the first year’s sales totaled approximately $1.5 million. Last year, its sales were $416.3 million and 1.1 million tons of steel in volume. Could the original partners — brothers Sol and Morris Siegal and Sam Siegal — have envisioned such growth? Perhaps. But what is certain is that the next generation of the family made it happen.

In 1983, Michael Siegal, the current chairman and chief executive officer, took over from his father. Throughout the 1980s and 1990s, Siegal led a second wave of family management that broadened both the operational and geographic reach of the company. One significant change was that the business became a public company in 1994. Now headed by Siegal, David Wolfort in the position of president (since 2001) and chief operating officer (since 1995), and Rick Marabito in the position of chief financial officer (since 2000), Olympic Steel has shown its malleability from the outset.

Olympic Steel began 48 years ago as a warehouser and distributor of steel, but soon changed its focus to steel processing. Over time, the company developed its metal-processing capabilities and purchased state-of-the-art equipment to provide value-added services to customers in just about any major industry that uses steel. The business evolved into a leading North American steel service center that specialized in the processing and distribution of large volumes of flat-rolled sheet steel; carbon, coated-carbon and stainless steel; and coil, plate and tubular steel products.

Siegal emphasizes that there were two important constants throughout the period of great development and growth over the past 20 years: customer service and superior performance that delivered quality on time. “Customers expect 100 percent quality and 100 percent on-time delivery,” he says. “We take great pride in meeting our customers’ expectations. We build enduring relationships by anticipating, understanding and fulfilling our customers’ needs.”

Olympic Steel’s operations have also grown significantly from the original location in a rented building in Cleveland. With headquarters just outside of Cleveland in Bedford Heights, Ohio, the enterprise comprises 13 processing facilities and two joint ventures located in nine geographic markets. The locations are: Bedford Heights (three); Bettendorf, Iowa (one); Chambersburg, Pa. (one); Cleveland (one); Detroit (one); Milford, Conn. (one); Minneapolis (two); Philadelphia (one); Schaumburg, Ill. (one); and Winder, Ga. (one). Of note, the Chambersburg facility, an 87,000-square-foot plant, is not only Olympic’s newest facility but also a manufacturing operation that produces component steel parts for OEMs. The company’s two joint ventures include: Olympic Laser Processing (OLP), a company that processes laser-welded sheet steel blanks for the automotive industry; and TS&P, a minority business enterprise company supporting the flat-rolled steel requirements of the automotive industry.

A Resilient Platform
Since the early 1970s, Olympic Steel has maintained a unique position by having supplier relationships with most of the domestic steel mills and also with international mills. This dual pipeline has enabled the company to react to changing market conditions and ensure a continuing supply of competitively priced materials. Commenting on current conditions in the steel industry and the long-range outlook for steel processing and its suppliers, Wolfort says, “The steel economy today is much more fragile than the overall economy. What we are seeing today is increased demand, but that demand is being spurred by a shorter supply side and not necessarily a robust demand from our customers. We expect to see further consolidation of our suppliers and competitors as the market dynamics continue to evolve.”

The market conditions in industries that use steel also bear consideration, according to Cathy Kish, Olympic Steel’s director of investor relations. “Our largest customer sector is the automotive industry, which is about 15 percent of our sales. Other steel service centers are about 10 to 12 percent and all other sectors are individually 5 percent or less.” That last category includes manufacturers and fabricators of transportation and materials-handling equipment, construction and farm machinery, environmental equipment and plate fabricators.

While noting that the steel industry as a whole has seen some very difficult times, Kish points out that some of Olympic Steel’s processing facilities are performing well. The company expects the remaining facilities to pick up business as the market rebounds. “We’ve received a number of new contracts this year and we’re especially pleased with our national contracts,” she says. “At the end of the day, it’s based on price, but we believe that we have an edge on our competitors because we are diligently focused on customer service, quality and on-time delivery.”

Tempered by Experience
Olympic Steel is planning for future growth by reconfiguring parts of its operations and upgrading others. Marabito states, “The internal focus on reducing operating expenses, inventory and debt over the past couple of years has positioned Olympic to take advantage of an upturn in the market. We’ve been very judicious on capital spending and are pleased with the fact that we’ve been able to remain cash flow-positive in this tough environment.”

The business has taken the following steps to meet these challenges:
• An internal program, Flawless Execution, helps employees to focus on streamlining operations and procedures to achieve profitable growth by delivering superior customer service and exceeding customer expectations.
• A new company-wide computer system is being developed to replace three existing systems now being used in steel-processing operations and administration.
• The number of employees was reduced from more than 1,100 to less than 900 over the past 18 months.
• Inventory was reduced by $17 million (20 percent) in 2001. Since April 2000, inventory has been reduced by more than $50 million.

When asked about the five-year forecast for Olympic Steel, each of the executives emphasizes the prospects for continued growth. “Olympic’s intent is to increase sales and tonnage profitably,” says Marabito. “As we emerge from this challenging environment, we are a stronger and leaner company. This will position us to again entertain opportunities for growth through acquisitions, joint ventures or internal expansion. Our objective is to achieve profitable growth, and we’re prepared to accomplish that task.”

Wolfort asserts, “We have some near-term challenges with the current marketplace. Recovery is just beginning and we are compelled to operate just as aggressively as we have over the past few years. We have emerged from this difficult market and are assertively capturing market share. Olympic Steel is poised for continuous growth as we have been noted for in the past.”

Taking the long view, Siegal says, “Maximizing our return on investment and providing a return for our shareholders remains our focus. We believe we have the people, the resources and the culture to withstand the toughest times and ultimately succeed in better times. We remain steadfast and are confident that we have the competencies to propel this company forward as the undisputed leader in the steel service center industry.”