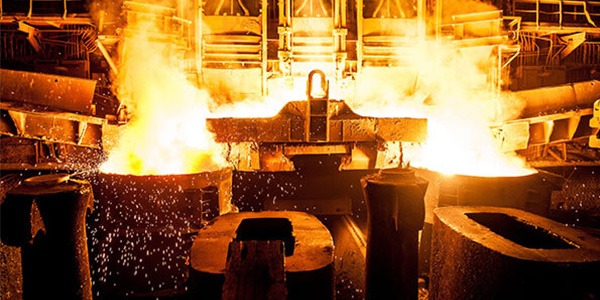 The steel industry in the United States has witnessed its ups and downs in the past several years with the onslaught of overseas competition. But one steel foundry in Longview, Texas, has proven that quality and efficiency can be leveraged to produce growth in even the most stormy of manufacturing climates.

Southwest Steel Casting Company is a custom job-shop foundry dedicated to providing a quality product as efficiently and economically as possible. Serving the energy, construction, transportation, marine and mining industries, the company was founded by Ross Williams in 1971. It was purchased by Texas Steel as a supplier to Caterpillar in 1974, and now is owned by American Railcar Industries.

When it opened for business, Southwest Steel consisted of one manufacturing facility, Plant 1, which started as a green sand-casting facility with one arc furnace and a shell core department with modest pattern-repair capabilities. Since then, the plant has undergone three expansions. The original green-sand system has been replaced by a modern NoBake molding system and includes a state-of-the-art sand-reclamation system.

The company’s soaring growth necessitated additional manufacturing facilities. Plant 2 was built in 1976 as a green-sand foundry, housing an arc furnace, core-making equipment, a BT-7 molding line, a pouring area, a shakeout, a casting cleaning room and shipping facilities. This plant has since undergone several expansions, including additions to the cleaning room, furnace department and shipping docks. In 1998, a Gudgeon thermal sand-reclamation system was installed to improve the quality of the sand and to reduce the waste stream. In 1997/98, Plant 2 also added a pattern storage building with a fire suppression system; a services building to house the testing facilities, stores and maintenance; and a new 6,000-square-foot administrative offices building.

All of these capabilities have enabled the company to grow from shipping 100 tons a month in 1990 to 700 tons a month today, and from 120 to more than 300 employees since 1989. “That kind of growth doesn’t come without the proper capabilities and efficiencies in place,” says President Nick Onofrio.

Onofrio says the company’s numerous capital investments over the years have helped it to capture, hold on to and expand its customer base by offering continuously improving quality and price efficiency. Southwest Steel’s flexibility and technical capabilities enable it to produce a variety of castings made of carbon steel, low- and high-grade alloys, and stainless steel. The services Southwest Steel provides include finish machining, assembly and painting.

Achieving ISO 9002 certification four years ago has only enhanced Southwest Steel’s high standing and unsurpassed reputation. “Capital investment has helped us to manufacture a quality process,” says Onofrio, “and we have quality people to help us implement that process.” The biggest challenges facing Southwest Steel continue to be lower-priced imports from China and Mexico, but he quickly adds that capital investments have helped the company to retain its competitiveness. “We lose the high-quantity work produced in plants overseas and in Mexico, but we’ve also gained in specialized, low-quantity production runs,” Onofrio explains.

Recent improvements include those to Southwest Steel’s Plant 2 facilities, such as the addition of a third shot blast and expansion of the furnace department, allowing for continuous manufacturing operations when unexpected equipment breakdowns occur. In 1999, Plant 1 started the manufacture of steel castings on a state-of-the-art NoBake molding system to allow for increased casting production capacity and a reduced load on the NoBake facilities in Plant 2. To support, this, additional core-making machines and associated support equipment, including a gas generator and fume scrubber, have also been added. Expansion at Plant 1, still ongoing, has represented a $3 million investment.

In addition, Southwest Steel has embarked on a plan to enhance its core-making facilities with the addition of a phenolic-urethane cold-box core blower. Amine gassing and scrubber support equipment has also been installed.

As part of Southwest Steel’s commitment to the local community, the company has become active in a variety of civic organizations including the Longview Partnership. The company is an active member of the Texas Cast Metal Association and the Association of Metal Casters in the state of Texas, whose goal is to be involved in government at the state level.
Southwest Steel and its employees are members of Steel Founders Society of America (SFSA), the national American Foundrymen’s Society (AFS) and the AFS Texas chapter. These employees are very active in projects and committees in both organizations, up to and including positions on the boards of directors.

But Southwest Steel’s desire to curtail the amount of waste leaving the plant has become its hallmark and the standard for other manufacturing facilities. To reduce waste output, thereby lessening the amount of landfill waste, Southwest Steel has invested in two types of sand reclamation systems: thermal and mechanical.

The mechanical process separates sand from the binder by rubbing the particles together; the end mix is then blended with new sand. The thermal system separates sand from the binder by burning off the binder. Both processes represent a $600,000 investment. To further its environmental commitment, Southwest Steel traditionally has recovered and re-used large quantities of scrap that otherwise would be sent to landfills.

The Plant 2 molding loop is undergoing changes to allow molds to get to the pouring floor faster, and also allow for larger floor molds to be made on a limited basis. A larger shakeout system, which will take larger molds while reducing the manual labor and improving the safety for the area, will also be added.

The core room in Plant 2 has been changed around, and a new CB22 machine has been added to the area of the CB16 and R-4 machines. These cold-box machines are vented into two new 1200 CFM scrubbers.

The Plant 2 cleaning room is also undergoing changes to improve the casting flow, reduce handling and reduce the amount of rework that the plant’s current work flow generates. To help these changes, the shipping department will move out of the Plant 2 cleaning room into a new 8,200 square-foot building addition to the west end of the plant. The company has also purchased a 3,000 kilovolt-ampere (KVA) arc furnace transformer to replace the existing 2,500 KVA transformer. This will allow the company to increase Plant 2’s melting capacity by approximately 20 percent.

Also, Southwest Steel plans to add two electric induction furnaces that will go into Plant 1. This will not only increase the company’s stainless steel capacity, but will allow it to make some duplex, monel and inconel type of metals.

With these commitments in place, Southwest Steel is poised to keep on a steady path of growth well into this century. As the company’s mission statement attests: “Southwest Steel Company is dedicated to exceeding customer expectations, providing opportunities for employees, fostering improvements, innovations and growth.” Onofrio adds that Southwest Steel will continue to conduct its business “with integrity and a genuine concern for safety and the welfare of the community.”