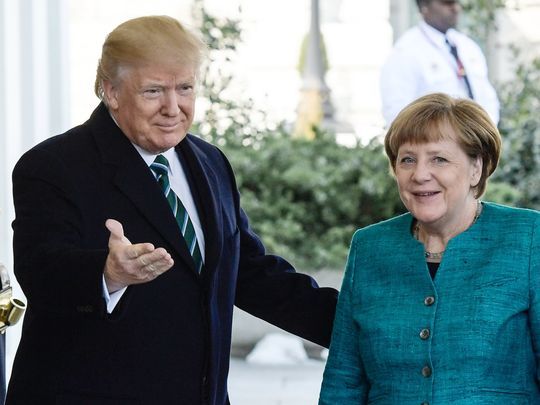 As I’ve suggested, President Trump has big, valid points to make about Germany’s auto trade with the United States. Not only does America run an enormous deficit with Germany in vehicles and parts, but claims that Germany deserves great praise from Washington because it makes so many vehicles in the United States are completely unjustified. For they overlook its companies’ very low levels of U.S. content and only very modest improvement on this score. That is, German vehicles are overwhelmingly screwed together in the United States, and therefore add much much less value to the American economy than autos made with domestic parts.

The trouble is that America’s troubles with German trade policies greatly transcend the automotive industry and, to a great extent, Germany. I’ve previously written that there’s a fundamental problem that both the administration and it’s critics are missing:  Germany’s economy, like China’s and many others around the world, is simply not structured in such a way as to make mutually beneficial trade with the United States possible.

But there’s another big U.S.-Germany trade issue that needs highlighting, along with a major danger that Bonn’s approach to trade is creating for the entire world – at least in the medium or long-term.

That other U.S. Germany trade problem has to do with the makeup of bilateral commerce. If you look at the nature of what the United States trades most successfully with Germany and vice versa, you find that the former category contains a mix of high value manufactures and commodities, while the latter is dominated by advanced industrial goods. Here are lists of the sectors in which America last year ran its biggest trade surpluses and deficits with Germany. (To the surplus list should be added – prominently – aircraft, which are not counted accurately in the U.S. International Trade Commission database I’m relying on.)

Top ten US deficits with Germany

These results are disturbing because, contrary to the superficial conventional wisdom, if you take seriously standard trade theory and its core concept of comparative advantage, sectoral trade balances matter tremendously. For the main idea behind the freest possible international trade is structuring the world economy so as to enable those countries most proficient at producing various goods and services to dominate their output. So surpluses and deficits in different industries show which countries are passing and failing this test – and thus which countries look likely eventually to control worldwide supplies of the sophisticated goods that create so many high wage jobs and foster so much innovation and productivity growth.

Since the U.S.-Germany data aren’t U.S.-global data, in theory they could be anomalies. In other words, Americans could be doing better with the world as a whole, and therefore, the nation’s prospects in high value industries could be a lot brighter. Unfortunately, that’s not the case at all. The makeup of U.S.-Germany trade isn’t terribly different from the makeup of U.S. global trade, in that America’s trade winners are, again, a mix of commodities and high value goods (again, including aircraft), and its losers are nearly all advanced sectors.

Yet Germany also is contributing significantly to a major trade-related threat that threatens the entire world, not just the United States. I’ve repeatedly spotlighted blue chip academic research concluding that unprecedented global imbalances centered on American trade shortfalls were instrumental in setting the stage for the last global financial crisis and the painful recession that followed. Worse, evidence keeps accumulating that international commerce is becoming worrisomely lopsided again, and that Germany’s overall international surpluses – currently the world’s largest – have generated much of the problem.

Indeed, a valuable reminder came in this morning’s Washington Post:

“[G]ermany is one of a number of countries, including China, Japan, and South Korea that are now saving far more than they are either consuming or investing….At some point, the world will be unable to absorb the capital surpluses of Germany, China and others, leading to another painful correction that might undermine the liberal order.”

Interestingly, Germany itself has indirectly acknowledged these risks, and hinted that it recognizes some responsibility to get the surpluses down. Unfortunately, Berlin has demonstrated few signs of following through. So although some of President Trump’s focus on the German trade issue seems off target, it’s also clear that the sense of urgency he’s brought to the issue, from both an American and global standpoint, is not only appropriate, but necessary.