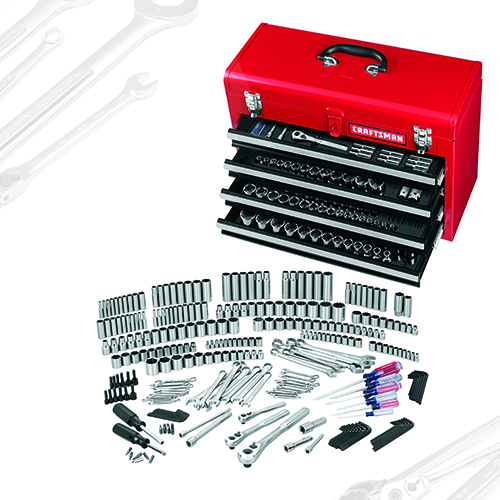 As with the best of businesses, Craftsman is never satisfied. That means better products and new market entrance. Dan Harvey describes what this venerable company has been up to.

Craftsman offers the best known, most reliable line of tools and lawn and garden equipment – famously distributed by the Sears Holding Corporation – and has become the best friend to the DIY (do it yourself) consumer.

Products are revolutionary – their impact almost as profound as the evolutionary development of the opposable thumb. Craftsman tool and equipment offerings are as versatile as they are durable. They help the user reach into – and better manipulate – building, repair and mechanical environments.

That’s why Craftsman has become the most trusted tool brand in America.

FROM RETAIL TO INDUSTRY
Craftsman has carried that trust – and its product versatility – into the industrial arena. Its Craftsman Industrial line is helping redefine the brand. The tools meet the heavy duty requirements of industrial and manufacturing professionals.

Need was the catalyst. “Historically, we offered our retail hand tools to the industrial customer,” said Kris Malkoski, vice president and general manager of the Craftsman brand. “However, since they were made for DIY needs, not all of the industrial customers’ needs were met, especially when it came to bigger tool requirements for larger jobs and installations.”

Thus, in 2010, the company launched the Craftsman Industrial line of 600 SKUs as a test to see if it could compete effectively with the right set of tools. Its industrial tools were substantially revised from the retail AKUs. Results proved pleasing. “We were so pleased that we envision 730 new items to show up in the hand-tool segment this spring,” reports Malkoski.

As portfolio grows, response gratifies – the company has received high marks from end users, distributors and W.W. Grainger, the line’s largest industrial supplier. “At a recent industry show, an auto mechanic approached me and said that he was thrilled that our products would now be available through Grainger,” relates Malkoski.

The hand tools, designed with help of end-user input, meet or exceed the standards established by the American National Standards Institute and the American Society of Mechanical Engineers. The line already offers a broad range of hand tools, and each is made of tough alloy steel and then heat treated, oil-quenched and tempered for uniform hardness and maximum strength, according to the company. Further, the products (which are all made in the United States) undergo a series of rigorous tests at Craftsman laboratories located at the headquarters in Hoffman Estates, Ill. “The products are built to endure the most demanding conditions. Our testing insures this,” says Malkoski.

EMPOWERING USERS WITH POWER TOOLS
The move into industrial isn’t all that excites Malkoski. She touts the brand’s NEXTEC™ line, launched several years ago. The name “NEXTEC” is fitting, as it describes a second-generation iteration, a fertile field of innovation that fosters development of new products.

“For instance, look at our articulating Autohammer hammerhead,” says Malkoski. “Even if you’re nailing straight above, you can turn the shape of the head so that it is at a zero-degree angle easily hammering straight up, to place the nails. And you can bend it from 45 to 90 degrees. Also, it’s equipped with a light, which makes it useable in dark areas, like when you are working in the confining spaces, beneath a deck for instance.”

Then there’s the multi-tool that, in its first generation, already boasted as many as seven advantageous features. “We’ve made a highly successful product even better,” relates Malkoski. “Previously, you had to use a hex key to take the attachments on and off. With the new item, all you have to do is pop up a lever and remove the different attachments.”

No hassle, no time wasted.

Another new generation item is a high-torque, rapidly energizing drill. “This new drill boasts the most inches-per-pound of torque in its class,” reports Malkoski. “Nothing similar in the industry is comparable.”

She’s also excited about the Craftsman NEXTEC™ QuickBoost™ Charger, developed in response to one of several so-called “customer pain points.”

“A pain point for the power tool user is battery power,” she explains. “If you forget to charge the battery before heading into a project, or if you have charged one battery and not others, and power runs out, you face a problem related to lithium-ion battery usage. The user is unaware that power is dying down.”

The user certainly becomes aware when the power is no longer there. “This entails a wait that decreases efficiency,” describes Malkoski. “Lithium ion chargers can take as much as 30 minutes or more.”

The company’s QuickBoost™ Charger changed the rules. “Our product allows you to put 25 percent of the charge back into a completely depleted battery in only about three minutes,” she reveals. “You can proceed with the job without waiting. You can drill in those other 90 screws or hammer in another 120 nails.”

Further, just in time for Father’s Day 2012, Craftsman will be delivering more products that will deliver the highest torque in their class. Consider a new impact wrench. “It’s a compact, 3/8-inch cordless impact portable power wrench that enables the user to get into really tight spaces, such as in a car engine,” describes Malkoski. “It has a variable speed motor that gets you from 0 to 2,500 RPMs, to help you loosen and tighten any variety of nuts and bolts. It also has an LED light, so that you can see where you are working in the tight engine spaces. We predict that it’s going to be a big seller.”

CUTTING EDGE LAWN EQUIPMENT
Lawn and garden equipment is another area that is very exciting for Craftsman. Last year, the company launched the Turn Tight™ line of tractors, which provides the user the industry’s tightest turning radius. Most tractors, Malkoski points out, have a turning radius of 12 to 18 inches. Craftsman brought it down to eight inches. “Typically, the operator needs to go back and forth and back and forth again around objects like a bird bath or a tree,” she says. “The eight-inch radius enables users to get right into those kinds of tight spaces.”

The company is taking the radius even tighter. In spring 2012, the company will launch the six-inch Turn Tight™, which will represent a 50-percent tighter turning radius than what competitors offer, reports Malkoski.

In January, at the 2012 North American International Auto Show, Craftsman spotlighted its new CTX tractor series. “It was designed for higher-income consumers who have large plots of land and need a rugged, high-performing tractor,” says Malkoski. The line’s tractors are not only powerful and durable, but they include automotive features including power steering, automatic traction control and electronic fuel management – all integrated in response to consumers’ wishes. “With automatic traction, the tractor’s tires remain in control when the user is doing tricky maneuvers like cutting up and down an incline or hauling on a wet surface,” she indicates.

This is how it works: The automatic control system sends power to both wheels independently; if one slips, the other keeps the tractor under control. The CTX also includes electronic height adjustment. “Anyone who has ever mowed a lawn knows what a hassle it can be to adjust the height on a piece of equipment,” reminds Malkoski. This automatic package allows the owner to adjust the cutting height with the push of a button. It comes standard on all new CTX models.

“The CTX is a premium product that we call ‘America’s hardest working tractor,’” says Malkoski. “It’s very utilitarian. With just a few simple steps, you can do things such as drop off the cutting deck and put on other attachments – such as a hauler, aerator, dethatcher and cultivator – and you can even attach a snow plow to the front. So, it’s useable all year.”

The quick deck removal also allows for easier maintenance, for things such as deck cleaning and blade sharpening.

“With lawn and garden equipment, we also focus on the aging customer,” continues Malkoski. “As they grow older, they like to own smaller plots of land, and they don’t like pushing a lawnmower. This year, we’re launching a rear-engine rider designed for them. It’s very easy to mount and dismount. And with the engine located in the rear, it provides better visibility. The user can see what is right in front of them. Also, as it is only 36 inches wide, you can get in and out of garden gates.”

INNOVATION THROUGH OBSERVING
Craftsman produces its innovative offerings by working with more than 300 manufacturing vendors, according to Malkoski. The innovations come as a result of something she calls observational research. “That’s where we watch the user and identify compensating behaviors,” she explains. “For instance, in 2011, I spent several days in Southern California, part of the time in an auto body shop and part at a ranch, watching how people use tools. We came up with the ‘pain points’ that would help us determine how to improve user experience. From there, we ideate and then create products that address needs.”

And that develops trust – trust is what it is all about for Craftsman, and that is one of the elements that has earned it the “America’s Most Trusted Brand” designation nearly a century after its inception.

“This year, we’re celebrating our 85th birthday and our profitable association with Sears that began in 1927,” says Malkoski.

Craftsman is as famous for its unlimited hand tool lifetime warranty as it is for its product. The warranty means free repair or replacement. Customers don’t have to show a receipt or date proof of purchase.

Again, it’s all about trust – as customers trust Craftsman, the company trusts its customers. This symbiotic relationship fosters a win-win situation.