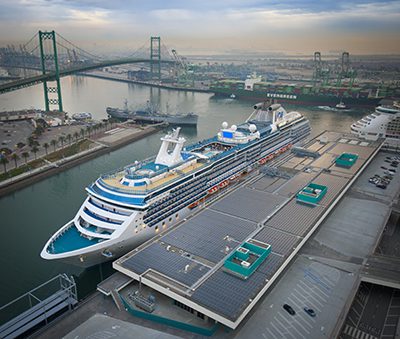 As the primary gateway for overseas trade, U.S. seaports are essential for economic prosperity, and federal funding for transportation infrastructure in and around ports pays enormous dividends for the country. Deep-draft coastal and Great Lakes ports are the nexus of critical goods movement infrastructure that connects America’s exporters with markets overseas. They also provide access for imports of raw materials, components, and consumer goods that are a key part of U.S. manufacturing and standards of living.

Given this, it’s no wonder that infrastructure spending at U.S. ports is on the rise.

In its recently-released 2016-2020 Port Planned Infrastructure Investment Survey, the American Association of Port Authorities (AAPA) – the unified and recognized voice of seaports in the Americas – asked its U.S. member ports how much they and their private-sector partners plan to spend on port-related freight and passenger projects over the next five years. The answer was a combined $154.8 billion. AAPA then contrasted that with what it believes is the “best-case” scenario for investments by the federal government into U.S. ports, including their land- and water-side connections, through 2020. The answer was just $24.825 billion.

The combined $155 billion, five-year investment that U.S. ports and their private sector partners are planning represents a more than threefold increase over the combined $46 billion figure obtained from the same survey five years ago.

According to AAPA President and CEO Kurt Nagle, the vast difference between the planned investment amounts between port authorities and the federal government is troubling, particularly considering the need to increase government investments in connections with America’s ports. This includes links on both the ship side (primarily navigation channel maintenance and improvements) and the truck/train side (primarily roads, rails, bridges, tunnels, intersections and overpasses).

“It’s vital that the federal government uphold its end of the partnership,” he said.

“Infrastructure investments in America’s seaports and their intermodal connections – both on the land and in the water – are in our nation’s best interest because they provide opportunities to bolster our economy, create and sustain jobs, enhance our international competitiveness, and pay annual dividends through the generation of more than $321 billion in federal, state and local tax revenue,” said Nagle. “From a jobs standpoint, goods moved through America’s seaports in 2014 supported employment of more 23 million U.S. workers — up from 13.3 million in 2007.”

“Those are really significant job numbers,” emphasized Dr. Martin. “In 2014, the U.S. coastal ports generated $4.6 trillion dollars for the U.S. economy, about 26 percent of the U.S. Gross Domestic Product. From a dollars-and-cents perspective, it’s hard to over-emphasize the value of investing in ports, particularly when you factor in how much these investments contribute to our overall economic prosperity and help lower the cost of imports and make our exports more competitive overseas.”

When reviewing the anticipated five-year federal investment in port-related infrastructure, AAPA found that while there’s been progress, the federal government has historically under-invested in the nation’s goods movement system. America’s road transportation network, for example, was only ranked 16th in The World Economic Forum’s Global Competitiveness Report for 2014-15, while federal navigation channels aren’t being adequately maintained at their originally-constructed depths and widths.

“AAPA applauds enactment of the FAST Act surface transportation bill at the end of 2015 that authorized $11 billion in new funding for land-side freight improvements through 2020. While that was a major positive step, additional investments are needed to effectively handle the nation’s burgeoning freight volumes,” said Nagle.

According to the American Society of Civil Engineers’ (ASCE) 2012 “Failure to Act” report, by 2020 there will be a $15.8 billion investment gap between expected annual federal funding on goods movement infrastructure and what’s needed to effectively maintain the system. In that report, ASCE estimated the cost of deficient and deteriorating highways to American businesses will have grown ten-fold between 2010 and 2020 to $276 billion. Similarly by 2020, shallow, narrow navigation channels will result in a $9.3 billion annual trade loss to U.S. businesses from the inability of most ports to accommodate today’s larger ships.

AAPA completed its 2016 infrastructure investment survey at the end of March. The following is a regional breakdown of survey responses: see left table.

“The take-away from this survey,” concluded Nagle, “is that we must have increased and sustainable funding at and on both sides of our ports.”

He added: “There’s still a lot of work to be done, but the investments that we make today in our ports will pay off for generations to come.”