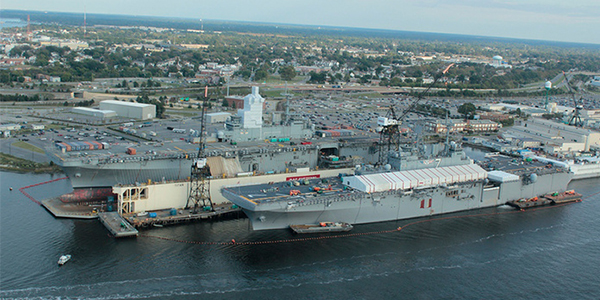 As a member of USMR, America’s largest non-nuclear ship repair, modernization, overhaul and conversion company, NORSHIPCO is using its expertise in the ship repair arena to diversify and provide repair and maintenance services to the industrial marketplace. Chemical processing plants, public utilities, power generation plants and hospitals are just a few of the clients which have benefited from NORSHIPCO’s ship repair experience and capabilities.

Since its beginnings, NORSHIPCO has adapted to meet the needs of its customers. It was founded in 1915 as the Norfolk Shipbuilding & Drydock Corporation for the restoration of tugboats and wooden hull schooners. The facility changed course immediately in response to international events; during World War I, the Norfolk, Va., company began repairing Navy vessels, starting a relationship with the U.S. government that endures to this day.

Now, 85 years later, NORSHIPCO is known worldwide for providing high-quality repair, maintenance and refurbishing services for all types of vessels – from small tugs to luxury liners to oil tankers to transport ships. Currently, 70 percent of the work is on government-owned vessels and 30 percent is on commercial ships, a percentage that is expected to grow as the global economy requires more over-water transport.

Other growth areas are the supply of repair services to the industrial market and the reconditioning of large-bore engine components. NORSHIPCO Diesel Marine International USA (DMI NORSHIPCO), a subsidiary, is a leader in providing the reconditioning of diesel engine components to the world’s fleet of ships and the power-generating industry. NORSHIPCO’s expertise has also expanded, via NORSHIPCO’s Industrial Services, to the maintaining and repairing of large machinery at land-based businesses and structures such as bridges and dams.

In 1998, NORSHIPCO became part of USMR, the largest non-nuclear ship repair, modernization and conversion company in the country. In addition to NORSHIPCO, which serves as the company headquarters, USMR’s shipyards are located in San Diego, San Pedro and San Francisco, Calif.; and Ingleside, Texas. The Virginia operation accounts for about 40 percent of USMR’s business. NORSHIPCO’s projected 2000 sales are expected to exceed 1999 sales of $160 million, which were approximately 30 percent more than the $120 million in 1998.

Al Krekich, president of NORSHIPCO and chief operating officer of USMR, sums up the company’s value-oriented philosophy as follows: “We are a best-value yard. We offer quality work at a very competitive price. We have a good safety record, and we offer a very attractive environment. Now, we are looking forward to continued growth in the industrial and commercial markets.”

Krekich, an Annapolis graduate who joined NORSHIPCO upon retiring from the Navy as a vice admiral after 34 years of service, describes NORSHIPCO’s four main strengths, starting with the 1,800 employees: “Our people are our No. 1 strength. They are skilled and experienced, and our policy is for management to listen to them. Every one of our shipyards has institutionalized our ‘People are Important’ philosophy. We believe it is management’s job to serve our workers. When our people are happy and have the tools necessary to do their jobs, productivity increases, morale is enhanced and customer service is heightened. It’s a simple concept, but often overlooked. Satisfied workers provide satisfied customers.”

Krekich identifies the three other strengths as follows. First, NORSHIPCO has one of the largest drydocks on the East Coast. Second, it also has a geography that provides a sheltered port; this port has wide channels and is dredged by the Army Corps of Engineers, enabling NORSHIPCO to service some of the largest government and commercial vessels. Third, the facility has recently undergone an extensive modernization, which includes newly remodeled shops and buildings, landscaping, paving, pier upgrades and investment in new equipment.

Located on a 110-acre site, NOR-SHIPCO’s facility offers two one-piece steel floating drydocks. Titan, a 950-foot drydock, can lift 54,000 tons and accommodate a 1,100-foot vessel. The other drydock is the 669-foot Virginian.

Don Everton, director of commercial sales, notes that NORSHIPCO is investigating opportunities in all sectors of the ship repair, industrial and diesel markets. “NORSHIPCO will continue to change and grow to meet the customer’s needs in this constantly changing market,” Everton says.

Tommy Seitz, vice president of contracts, comments on NORSHIPCO’s diversification goals: “We are very interested in doing more commercial and industrial work, and we have the services and facilities required. We accomplish repairs and maintenance, provide structural fabrication, installation, mechanical services, electrical services and a lot more.”

Describing what NORSHIPCO’s customers can expect at this state-of-the-art facility, George Doerfler, manager of commercial contracts, states, “The facility is a thing of beauty, and improvements continue daily. Piers, cranes, shop buildings and equipment are all being upgraded and modernized. The only thing that remains unchanged is the loyalty, dedication and talent of the men and women who perform the work for our customers.”

Discussing NORSHIPCO’s commercial work, Seitz names major operations that use its facility and expertise, such as Carnival Cruises, Maersk USA, SeaRiver, Princess Cruise Lines, V Ships and Royal Caribbean. NORSHIPCO does large-scale conversions. The yard presently has a contract for the conversion of the Sealand Newark Bay and the OCCL Innovation for Maersk USA. In 1999, NORSHIPCO reactivated the LNG Southern for Argent Marine. This was a 10-month, multimillion-dollar conversion and reactivation that required a high level of expertise. Also in 1999, NORSHIPCO performed the conversion of the USNS Shasta, which was a 12-month, multimillion-dollar project to convert the vessel’s living quarters from military crew requirements to civilian.

DMI NORSHIPCO is the United States’ only facility operating in partnership with Diesel Machine International Ltd. in England, the world leader in reconditioning diesel components. Rodney Golden, manager of DMI NORSHIPCO, describes this work as a huge undertaking: “We remanufacture cast-steel parts in which a piston can have the same weight as a large car. These pistons and components are for large-bore, slow-speed diesel engines. These engines are three stories high and eight stories long (13 meters by 22 meters). They reach 89,000 horsepower at 100 revolutions per minute. Their piston crowns can weigh upwards of 3,000 pounds. A single valve can be 5 feet tall. A cylinder cover can weigh more than 19,000 pounds.”

According to Everton, the result is worth the effort: “This high-quality reconditioning of components brings them back to OEM measurements. When we are finished, the unit is tried and tested, so we confirm the result.”

Golden takes the result a step further, stating, “Many times, the work we do lasts up to four times longer than the original part – at 70 percent of the cost of an original.”

According to Everton, about 15 years ago NORSHIPCO decided to diversify further by offering its expertise in the repair of large machinery and equipment to the industrial sector. Facilities such as hotels, hospitals, factories, universities, textile mills, oil refineries, office buildings, construction sites, industrial facilities and power stations now use NORSHIPCO’s know-how to keep their equipment up and running.

Another land-based application of NORSHIPCO’s expertise is the company’s work on bridges and dams, doing gear repairs and general maintenance. Describing one project, Scott McLeod, manager/superintendent of industrial services, says, “We worked on a movable-stand railroad bridge built in the 1950s. We completely automated it so that it can be moved from a remote location. We took 1950s construction and updated it to 2000 technology.”

NORSHIPCO’s industrial services are provided both on site and at the yard, where services include prefabrication of machinery for on-site installation. Krekich emphasizes the potential of this work: “We are looking for expansion in this market segment. We do good work on big machines, and that can be translated to these businesses.”

NORSHIPCO strives to eliminate quality deficiencies by applying a quality-management system based on the requirements of ISO 9002. NORSHIPCO is the first ship repair yard in Virginia, and one of the first in the world, to receive ISO 9002 certification. In addition, NORSHIPCO is listed by the American Institute of Management as one of the “Best Managed” companies in America.

Clearly, it is a company that has set a chart for success based on quality and service.