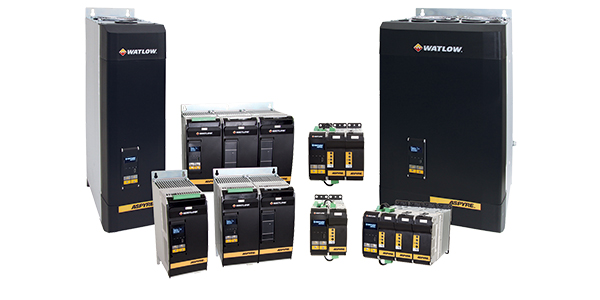 In 1922, St. Louis was the shoe manufacturing capital of the world and electric power was a growing energy alternative to gas heat, which was difficult to confine and control, and steam, which was more expensive to install and maintain. Recognizing the potential of electricity for modern industrial operations, Louis Desloge Sr. started a company to manufacture electric heating elements for the steamers and dryers used by the major industry in town. It was a shoe-in plan for success.

“The company name was a play on ‘low wattage’,” explains Dan Sparks (no pun intended), strategic marketing director, “and for the first 40 years it remained a small, family-owned electrical heating company. During the next 20 years, Watlow branched into plastics processing and higher-powered industries, particularly food equipment for restaurants. Then, about 20 years ago, Watlow entered a rapid growth phase with the acquisition of small electronics firms and moved beyond the electric heater to make thermal systems for OEMs. This led to a rapid expansion generated by new applications in higher tech industries such as semiconductor processing equipment, clinical instruments and medical devices.

Of course, like everyone else in the high-tech industry, Watlow’s rapid growth slowed a bit with the dot.com bust and the general economic downturn of the last five years. Still, Watlow has grown from a 500 person staff to a company of some 2,500 employees. Its products and services now address a variety of industry applications for thermal heaters, sensors, and controllers. These include semiconductor processing, packaging, plastics, power generation, foodservice equipment, aerospace, chemicals, oil and gas, and pharmaceuticals. Though still headquartered in St. Louis and still privately owned, Watlow’s unique approach to designing and building thermal systems is poised to warm worldwide markets.

“What makes us different from our competitors is that we’re not simply a component shop,” Sparks explains. “Our approach is to work closely with our customers to solve problems with customized solutions. We don’t compete on cost, we compete on value-add. That’s what significantly differentiates us from everyone else.”

Key to this approach is that the direct sales force is comprised of experienced engineers assigned to support customer design teams. Though Watlow sells primarily to OEMs, about 20 percent of business is to end-users who may be serviced by independent distributors. However, Sparks adds that this “systems strategy” remains the same, with the distributor’s engineers working closely with the customer to design the most effective solution for Watlow to implement.

“Watlow has always listened to its customers, but in the past this has been an informal process,” Sparks explains. “The company implemented a formal VOC process in June 2003 and has already conducted almost 100 VOC listening sessions. What it involves is contacting customers and spending time with them to determine how we can serve them better. This is a different kind of conversation than how can we address a current challenge or develop something for a specific application.

We want our customers’ general opinion on how to better meet their overall needs. It could be about product, it could be about process, and it could be about general engineering principles. The point is, it is about customer perceptions of what can be done to help them improve their systems and better serve their customers. Watlow is investing significant resources in VOC to create a customer-centric environment that will be the standard for how we conduct our business.”

One example of how Watlow provides value-added solutions tailored to a specific situation is a molecular biology company that wanted to improve heating performance and reliability of its temperature controllers. The company originally contacted Watlow for information on a new controller. Now, it could have been a simple matter of quoting a price for the component, and maybe making a sale. But it wouldn’t have been what the customer really needed. Instead, Watlow engineers spent a week analyzing the thermal system with a chart recorder and concluded a new controller was not the complete solution.

Their recommendation: switch from high-mass heaters to lower-mass, fast-responding flexible heaters. This change not only better performed to the customer’s design objectives, but exceeded them, as well as offering less overall power consumption. Not surprisingly, this led to sales not only of this particular system, but additional heater and controller systems from a new loyal customer.

Single Iteration
Recently, Watlow has taken the notion of customized solutions a step further with its new Single Iteration engineering services group, located in Fenton, Mo. In keeping with company tradition, the group’s name reflects the nature of its business. “One way to engineer a solution is essentially trial and error, test this piece, test that piece, test a replacement piece if the previous results weren’t optimum, until eventually you come up with the best combination and performance,” explains Ray Derler, business director. “What we aim to do is to perform the sophisticated engineering design up-front. Our computational engineers use such sophisticated tools as fractal analysis and fluid dynamics to work out all the variables so that the prototype test can be conducted in a ‘single iteration’.”

Derler notes that this approach is primarily for “high-risk” type applications that can significantly reduce typical lead times, depending on the technology, of between three to 10 weeks. “This is for customers who are looking for a unique macro-solution beyond a customized heater system,” Derler points out. “It involves the design of proprietary technology that becomes an application owned exclusively by the customer.”

An example is a flat panel video display manufacturer that required unusually even and consistent heat performance. “You don’t want striations on the display glass,” Derler explains. “But placing the glass in a vacuum chamber at a 600-degree temperature with heating elements that weigh more than a hundred pounds makes it pretty tricky to attain this. What we did was to calculate all the physical stresses to determine not only the best application of heat, but a better heating system. This involves not only the hardware, but the software to effectively control the process to achieve optimum results.”

Says Derler, it’s a question of resources. “Over the last few years with all the economic pressures on them, companies decided to concentrate on their core competencies. That means they frequently don’t have the engineers on staff with the kind of experience and background to develop these types of one-of-a-kind solutions. Single Iteration was formed to help industry better address these needs when they arise to dramatically reduce design and development time while also improving thermal performance.”

One advantage the engineering services arm of Watlow has is the flexibility of resources. “We’ve got a dedicated core group assigned specifically to Single Iteration, but we can draw on the assets and expertise throughout Watlow on an as-needed basis,” Derler notes.

Continuous Improvement
Lisa Ptasienski, marketing communications specialist, explains Watlow is a $250 million company that is anticipating significant growth. One area of opportunity is in international sales, particularly in Europe; Watlow also recently also opened offices in Singapore. “In terms of market share, we pretty much don’t have a lot of room to grow in North America,” says Sparks. “But in Europe, which accounts for only about 20 percent of total sales, there’s still inroads for us to make.”

Despite that market dominance, Watlow isn’t sitting back on its laurels. “Just because we’re a value-added manufacturer doesn’t mean we’re oblivious to pricing,” Sparks says. “We’re looking to improve our own manufacturing processes to be more lean and mean, as well as to better control the quality of the product and improve safety for our workers. So we’re implementing Six Sigma processes and we have a number of black-belt organizations. The objective is continuous improvement.”

Most of Watlow’s manufacturing facilities are located in the Mississippi valley region, though there are other plants throughout North America, including Mexico. “For the most part, we’re not looking to go offshore, though the Mexico facility does enable us to take advantage of lower cost labor,” Sparks notes. “However, because much of the manufacturing process involves skilled labor, we feel we have a better handle on controlling quality by keeping our operations close to us. Besides, we’re still a family-owned company that does feel an obligation to keeping jobs here in the U.S.”

All of this explains why Watlow is such a hot company.