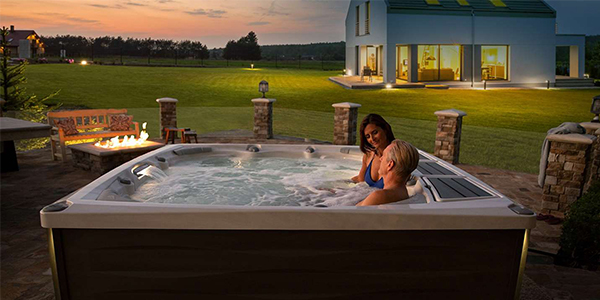 When Roy Jacuzzi introduced the first self-contained, fully integrated whirlpool bath in 1968, a new industry was born based on the human body’s affinity to sweet immersions. Today, Jacuzzi is the chief executive officer, chairman and president of Jacuzzi, Inc., which is the parent company of Sundance Spas of Chino. Calif. Thirty-three years later, all spas are still built by the same principles of Jacuzzi’s original vision. Today, Sundance Spas offers a full line of spas for every lifestyle and for every budget — so everyone can experience the joys of owning a backyard spa.

“We believe our product is the most reliable in the world,” says Jonathan Clark, president of Sundance Spas, “and we back up this statement with a comprehensive and solid warranty that’s among the best in the industry. Sundance Spas manufactures four brands of internationally recognized and energy-efficient hot tubs for every lifestyle.”

The four brands include the Sundance Spas series, Sweetwater Spas, Architectural Spas and Jacuzzi Premium Spas. “All of our products are designed to enhance our customers’ lifestyle, whether they are used for socialization, therapy or relaxation,” adds Clark. Sundance also understands the heightened concerns about energy efficiency and engineers its spas to be highly cost-efficient to operate.

Hydro Power
“Sundance is the world leader in the manufacture of premium acrylic spas, along with our Jacuzzi Premium Spas,” says Clark. “Our Sweetwater line of spas appeals to younger buyers looking for competitive features while maintaining budget limits. The Architectural series is a revolutionary alternative to the more traditional gunite in-ground spas. The acrylic molding in this series allows for a multitude of hydrotherapy options and seating arrangements, with the beautiful and unique design elements that an in-ground spa offers. This type of spa is equally appropriate in a mansion setting or in a smaller, condo-sized yard. The Sundance and Jacuzzi Premium spa series offer innovative and cutting-edge features that knowledgeable hot-tub shoppers always ask for.”

Although Sundance’s products are made almost exclusively for consumers, spas are also used in clinics, athletic clubs, country clubs and chiropractors’ offices. “The reasons are because our spas offer hydrotherapeutic benefits,” says Clark. “Many professional sports teams — including the Los Angeles Kings, the Los Angeles Clippers and the Calgary Flames — use our products exclusively.”
The visual effect of a Sundance-manufactured spa is reassuring enough — with its clear, sparkling and bubbling water ready to massage away whatever problems the world might present. But the real assurance of Sundance spas comes from those things we cannot see, but would certainly notice if they weren’t there. These are the highly engineered mechanisms that distinguish a Sundance or Jacuzzi spa from the all the rest.

Built for Comfort
Carefully designed and engineered elements of every Sundance spa ensure customer satisfaction and ease of operation. First of all is the form-fitting and ergonomically comfortable spa shell, molded from one seamless piece of acrylic. Sundance spas are sculpted to accommodate every body type and size while offering the renowned Sundance and Jacuzzi hydrotherapeutic experience. Because there are no glued-on sections, Sundance spas do not delaminate, separate or leak. The shell is a patented, three-layer Rigid Bond‘ construction eight times stronger than ordinary fiberglass resin shells.

Sundance pioneered the use of harness plumbing in its spas, which means jets can be precisely clustered to achieve greater pumping efficiency and more secure fittings. The spa control system offers customized water and air pressure, jet selection and jet direction. Fully programmable filtration and temperature adjustments offer user-friendly operation. Energy-efficient microprocessors continuously monitor all spa functions, regulating temperatures within plus or minus a half-degree Fahrenheit.

The spas’ water heaters are designed for thermal efficiency and single, dual or triple pumps provide the massage power. In addition to whisper-quiet filtration, the pumps also produce ozone to sweeten the spa experience. All air controls and massage selectors are designed to be within a finger’s reach so as not to interrupt the experience.

Each spa has nine jets, which allow the choice of Eastern, Western, Swedish or Shiatsu massage. Sundance Spas was the first manufacturer to introduce air-true aroma, so that spa users can enjoy the positive effects of aromatherapy without adding chemicals to the water. Scent-impregnated beads, a dedicated blower and SilentAir injector jets work in concert to create the magic of an aroma-therapeutic environment.

“Our plant operates the most automated assembly line in the industry,” notes Clark. “One of the most significant features of our new plant is our constantly moving glass-shop conveying system in our up-to-date spray booth, which is equipped with volatile organic compounds (VOC) capture areas. We utilize best available control technology and capture 100 percent of all glass-room vapors, routing them to be destroyed in our new thermal oxidizer. Highly sensitive to environmental concerns, Sundance designed the oxidizer to achieve lowest possible emission rates, thereby making Sundance Spas the cleanest acrylic spa manufacturer in the world.”

Sundance plans a major relaunch of Jacuzzi Premium Spas. In the past year, the company began an intense marketing campaign for its Architectural series. “These spas offer far more comfort and hydrotherapy options than traditional gunite spas,” says Clark. Each cast acrylic spa is 40 inches deep and has built-in steps for easy access, multilevel contoured seating to accommodate different heights, two therapy seats and a total of 25 jets.

“Our product enhancements are manifestations of Sundance’s continued commitment to providing consumers with the very best technology and innovation available in the hot-tub industry,” says Clark. One of the company’s more revolutionary enhancements is its Fluidix ST hydrotherapy jet, which is a bearing-less jet providing an oscillating massage with no moving parts.

Bathing Beauty
“We are known for going beyond any limit to assure consumer satisfaction,” says Clark. “Sundance operates on integrity, honesty and reliability, all supported by state-of-the-art customer service.” The company’s vision statement, ethics statement and mission statement each attest to Sundance’s commitment to customer service, employee encouragement and an eye to the value of the company’s shareholders. This level of dedication shows in the awards and honors continually shining on Sundance. Consumers Digest has awarded its Best Buy citation to Sundance several times, and the National Spa and Pool Institute has bestowed the prestigious John Holcomb Silver Award to the company.

What kind of management is responsible for this level of competence and excellence? “I hire the most powerful senior managers available,” says Clark. “Sundance has vice presidents in four key areas: Karen Hansen of service; David Snapper of finance and administration; Steve Purcell of operations and Jerry Greer of sales and marketing. They do not simply manage, but lead with results-oriented goals.”

The company employs about 1,000 people and has a network of 3,000 salespeople and service agents representing the company through associated dealerships, service centers and regional territory managers. Sundance spas are marketed in about 700 locations in more than 60 countries throughout the world. “Rather than using formal advertising campaigns, we believe that word-of-mouth is more powerful,” says Clark. “The majority of our customers come to us from dealer and consumer referrals.” The company reports 2000 revenues in excess of $100 million.

Assessing the near future for Sundance, Clark echoes the company’s mission statement: “We will be the largest spa manufacturer in the world. We will provide unparalleled internal and external customer service. We will capitalize on product innovation, manufacturing efficiency and effective global distribution to build market share and profitability. Over the next five years, we will achieve annual sales in excess of 90,000 spas in 60 countries, with over 800 worldwide retail locations.”

Those seeking more information about Sundance can dive into at any one of the company’s three Web sites, including www.sundancespas.com, www.sweetwaterspas.com or www.jacuzzipremium.com.