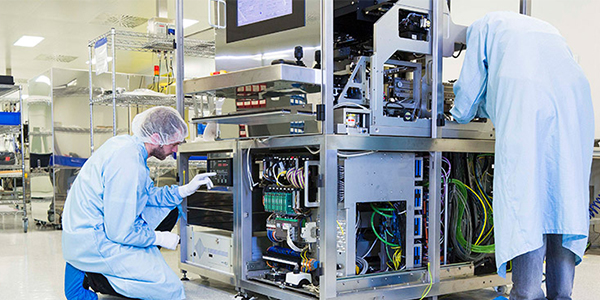 SUSS MicroTec was founded in 1949 as a distributor of Leitz optical equipment. Today, SUSS is the leading global supplier of manufacturing equipment and process technologies for the advanced packaging, compound semiconductor, microsystems technology and test systems markets.

SUSS is a multinational company with headquarters in Munich, Germany, and 18 locations worldwide. The company has a presence in the most important markets for its products in Europe, North America and Asia. SUSS has been operating in the United States since 1980 and its U.S. headquarters is in Waterbury, Vt. The United States, Asia and Europe were the source of 40 percent, 32 percent and 28 percent, respectively, of the company’s 2001 revenue.

SUSS MicroTec has experienced phenomenal growth since 1998. The company’s annual revenue has gone from $68 million in 1998 to $215 million in 200, an increase of more than 220 percent in just three years. During the same time period, the number of SUSS employees has doubled to 1,000 worldwide.

SUSS went public in 1999 and the company’s shares are traded in the Neuwe Markt of the Frankfurt Stock Exchange.

SUSS precision bonders are found in the compound semiconductors market where they are employed to support a wide variety of processes including silicon fusion, thermocompression, adhesives, eutectic and anodic bonding. With equipment suitable for manual bond aligning to sophisticated bond cluster handling units, SUSS offers comprehensive solutions for all bonding applications.

The microsystems market uses SUSS products for the manufacture of microelectromechanical systems (MEMS) commonly found in inkjet heads, thin film recording head sliders, acceleration sensors and pressure sensors. Microelectromechanical systems also are used in fluid control, biomedical and airbag applications, to name a few. For example, tiny MEMS are installed in biomedical instruments for cleaning arterial passageways. The airbag industry, on the other hand, counts on MEMS for the production of airbag sensors.

The Leader in Advanced Packaging
The advanced packaging (AP) market represents SUSS’ primary market. SUSS provides solutions for semiconductor manufacturers who are under constant pressure to reduce their manufacturing costs. SUSS specializes in advanced packaging, an emerging technology that will allow customers to package and assemble semiconductors at lower costs.

Advanced packaging is a revolutionary innovation in the semiconductor field for a couple of reasons. First, with AP manufacturers can produce computer chips with interconnects built right into the chips; no additional wire bonding is required, which reduces cost. The new chip building technology also is referred to as bump technology. Since all of the interconnects are underneath the chip, bump technology improves the functionality of the semiconductor because it reduces the space required for the chip. In effect, the entire package is the size of the chip itself.

Second, with AP technology manufacturers can move wafers to the back end of the semiconductor manufacturing process. “Currently, we are witnessing a paradigm shift in the back end part of the business, which will dramatically reduce the costs of packaging and assembly,” says James A. Quinn, SUSS’ executive vice president and general manager. Today, wafers are sliced into chips early in the production process. Advanced packaging technology allows customers to work with wafers all the way through the back end of production. The longer companies can handle the process at the wafer level the easier it is for them. Handling a wafer is more efficient and cost effective than dealing with multiple chips.

After manufacturers run the wafer through the front end and add the necessary patterns into the wafer, 25 to 26 layers are put onto the wafer. At the end of the process, the wafer is divided into individual chips that are subsequently packaged. This is the essence of wafer-level manufacturing.

According to Moore’s Law, first postulated in 1965 by Gordon E. Moore, every 18 months chip prices will halve while chip speeds will double. Moore’s Law has become the guiding principle for the semiconductor industry to deliver ever-more-powerful chips at proportionate decreases in cost; however, in 2002, the decades old rule-of-thumb is running up against physical limitations. In the spirit of upholding Moore’s Law, the challenge for SUSS is to help the semiconductor industry continue to increase chip speeds and decrease chip production costs. SUSS’ AP technology is the company’s answer to that challenge.

Chips today have an unprecedented number of properties. Devices relying on chips, such as mobile telephones, digital cameras and video cameras, keep decreasing in size while their capabilities continue increasing. Advanced packaging helps create a new generation of portable devices for new markets.

“Our focus is on wafer-level packaging,” explains Quinn. “We’re honing in on increasing our customers’ ability to take the whole wafer and place it into the back end of the semiconductor manufacturing process. Our technology will allow customers to increase the amount of throughput and to decrease the overall cost of ownership. With unprecedented mechanical and electrical properties, new package types such as wafer-level chip size packages will create new generations of portable devices for converging markets.”

In its Taiwan facility, SUSS is installing new wafer-level bumping equipment. The company also is moving from 200mm to 300mm wafers. “Today, it’s all about the size of the real estate,” says Quinn. “Larger wafers translate into more chips for semiconductor manufacturers.”

SECAP
In order to streamline the IC industry’s transition to wafer-level packaging, SUSS was one of the founding members in fall 2000 of the Semiconductor Equipment Consortium for Advanced Packaging. “Individual companies supplying the semiconductor industry can only offer part of the AP solution,” notes Quinn. “SECAP gives customers the option of going to one source for all of their AP needs.”

SECAP provides for the seamless integration of suppliers and encompasses material suppliers, periphery equipment suppliers, and main equipment suppliers. The ultimate goal of SECAP is to fine tune the IC manufacturing process, which includes sputtering, lithography and electroplating, for higher yields and more cost-effective production.
SECAP has initiated a project in Asia that demonstrates seamless wafer-level manufacturing to potential customers. In July 2002, SECAP announced the opening in Taiwan of the world’s first 300mm packaging line configured for high-volume production. The new plant will be able to produce 4000 to 5000 wafers per month. Representatives of large multinational chipmakers, foundries and packaging subcontractors are encouraged to visit the Taiwan plant for a demonstration. Customers can observe first hand the cost of ownership associated with the line and see how they can implement the line in their own companies.

SUSS continues to add to its product line through key acquisitions. Recently, SUSS acquired Fairchild Technology, a leading manufacturer of coating equipment. SUSS also acquired, in 2001, a manufacturer of photomasks called Image Technology. Both acquisitions have added to SUSS’ ability to provide integrated solutions. According to Quinn, “At SUSS, we strive to be a single source provider of the equipment, support equipment and photomasks that form part of semiconductor manufacturing process.”

An Asian Explosion
Asia looks set to become SUSS’ biggest market for advanced packaging products. “Many companies in Asia are investing in wafer-level packaging today in order to be ready to ramp up cost-effective volume production as soon as the next upturn starts,” notes Quinn. SUSS plans to open a new facility in Taiwan under the Image Technology product line to support the region’s growing demand for AP solutions. SECAP also is busy in China with a series of seminars devoted to educating customers on the consortium’s capabilities and the technology behind these capabilities.

Asia, particularly China, also looks set to become the largest growth market for the types of products making use of SUSS technology. As the Chinese economy grows so will the demand for consumer products made possible by SUSS. “The Chinese market is set to explode,” says Quinn. “China just passed the United States as the country with the highest number of cell phones at 130 million. While that number might seem like a large quantity, as a percentage of China’s total population the number is tiny.”

While SUSS has set up a Shanghai office to serve the Chinese market, it also is positioned to reap benefits in other exploding markets through its continual push to invent new and more innovative technologies.