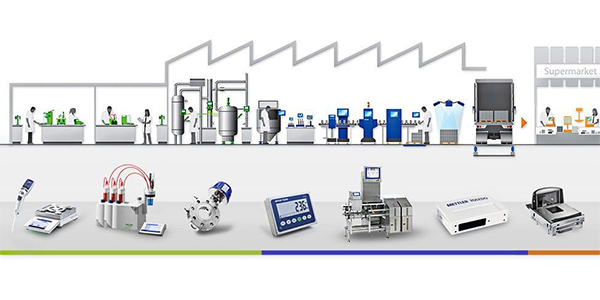 It’s a sign of the times, and Al Herold can’t help but chuckle at the scope of change that has crept into his industry over the last 10 years. “Our facility has predominantly been a steel fabrication facility. Now we are producing software,” he says of the Mettler-Toledo Heavy Industrial plant in Columbus, Ohio. “It’s not easy. You need to find the talent, but it can be an aid in selling actual steel fabrications and in achieving our goals – selling solutions.

“Twelve years ago,” adds Herold, general manager of Mettler-Toledo’s Heavy Industrial PO, “we had one tape-driven, computer-controlled machine. Now we have robots and computers at nearly every station. Vehicle scale production and weighing and IT technologies are really snowballing. To keep in front, you have to be focused.”

“What we want to do,” explains Herold of the steel- fabricating facility that manufactures scales and stainless steel enclosures and parts, “is to provide the total solution. In the past people have bought the scale and then bought separate software. Today, we can supply the entire package.”

Providing the entire package is something Herold’s employees do all too well, says Herold. The facility, which takes in roughly $50 million a year in sales, is now the “competency center” for Mettler-Toledo’s worldwide operations in the manufacture of weigh module and vehicle scale products. In fact, in many regards, the plant has achieved “world- class” status and has just experienced one of its best years ever.

Being tops in a company that is itself a global heavy hitter is not easy. As a whole, Mettler-Toledo is a leading manufacturer of precision instruments and is the world’s largest manufacturer and marketer of weighing instruments for use in laboratory, industrial and food-retailing applications. The company has a long and successful track record of innovation and devotes substantial resources to research and product development. For example, there are more Mettler-Toledo weighing and related measuring instruments in daily operation around the globe than any other brand.

Production statistics out of Herold’s facility bear this out. Here, the following is consumed:

In addition, Mettler-Toledo has the No. 1 market share for floor scales, producing thousands each year with short delivery cycles; many are shipped the next day. Nine hundred-plus vehicles scales are manufactured in North America annually, while an additional 2,500 are sold worldwide and manufactured in other Mettler-Toledo plants. Here’s some more for the record books: The smallest scale produced at this facility was a floor scale measuring 10 inches by 10 inches, complete with four load cells, the largest being a railroad scale measuring 250 feet. (A close second was a concrete deck truck scale, measuring 247.5 feet!)

From Fabrication to Software

Mettler-Toledo recently introduced a new product for vehicle scale weighing, WinBridge® Version 1.3.9. This software package can be tailored to a specific industry or to individual customer processes. Applications range from aggregates such as asphalt and concrete, sand and gravel, to agriculture, forestry, waste and landfills, waste recycling and transfer stations.

“Each industry’s program has enhancements specific to that industry,” Herold explains. WinBridge® comes in three tiers: Standard or entry level; Professional for mid-sized companies; and Advanced, which means the program is more easily manipulated and tailored to specific heavy “Data Miners.”

Software aside, the industrial product line includes vehicle scales for rail and truck; heavy capacity products, which include any kind of industrial floor scale; and weigh modules which are used in weighing tanks and vessels. The Weigh Module line includes products rated from 5 kilograms to 100,000 kilograms which have complete international approvals; air-cargo scale products include roller and caster decks; and pancake platform scales. Primary customers for these products are targeted to the express transport and air cargo markets.

The heart of the vehicle scale line is the DigiTOL® POWERCELL® brand load cell, with a current installed base in excess of 250,000 worldwide. Design features include IP68/Nema 6P hermetically sealed, stainless steel construction, enhan-ced diagnostics and strong DigiTOL® output that protects against RFI and EMI interference.

Where Everyone Likes a Challenge

The employees of the ISO 9001-certified facility have never been known to shy away from a challenge, says Herold. For example: One customer had a very specific need for a 30-inch by 30-inch, 500-pound capacity roller-top scale on a 36-inch stand. “We had it done – prototype and all – in less than one week,” Herold boasts.

Continuous improvements every year help keep us headed in the right direction.” In addition, 15 internal ISO audits are conducted annually, and more than 300 products are audited each year. Ongoing empirical testing of products and new designs ensures top-quality products.

“We design and build a lot of our own test and manufacturing equipment,” Herold adds. “We don’t believe this is done anywhere else in the world.”A World-Class Operation; a Family Business MentalityThe family business founded by Ben Dillon and called Masstron more than 20 years ago was bought by Toledo Scale in 1986 and then acquired by Ciba-Geigy’s Mettler Instrument Group in 1989, to form the Mettler-Toledo Group. A publicly traded company today (NYSE Symbol: MTD), the facility maintains the same “work ethic and family values” that Dillon established in the beginning, Herold says.“People have an unquestionable work ethic and desire to satisfy customers in this company,” he adds. “Everyone here prefers a challenge, and when there’s a challenge, they perform unbelievably well. That’s the strength of this facility.”