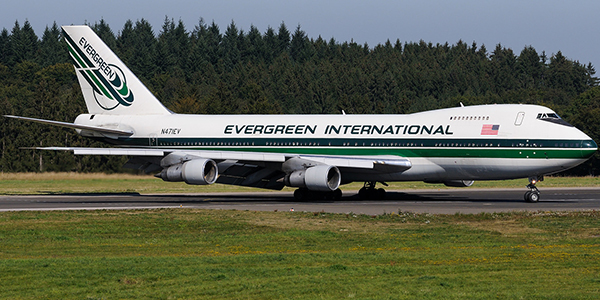 Based in McMinnville, Ore., Evergreen International Airlines, Inc. is one of the largest cargo fleets in the industry, shipping worldwide not only for commercial customers, but the U.S. military, most recently in support of the Iraq War. In addition to launching carrier operations for Emery Worldwide, United Parcel Service, and the U.S. Post Office, Evergreen services major international airlines, freight forwarders, and manufacturers. Evergreen currently maintains a fleet of 10 Boeing 747s and five DC-9s; the larger 747s fly out of JFK airport in New York and serve international destinations in Europe and Asia, while the DC-9s are based on the west coast at Travis, Calif., and Rickenbacker International Airport in Columbus, Ohio for domestic routes, though, as the company name implies, the bulk of operations involve international deliveries.

However, as Ed Connolly, executive vice president, points out, “Even though we’re based out of these airports, our planes are constantly in flight, 24/7.”

Evergreen International employs 432 people, which includes the sales force and maintenance support personnel. Planes are staffed by a pilot captain, a first officer, and a flight engineer. About 30 percent of the pilots have some military experience, while others are experienced in other regional carriers. “Most of the pilots have been with the company on average of 12 years, with a few logging as much as 25 years,” says Bob Warren, vice president of flight operations.

On-Time Arrival
It’s a time-sensitive business, and making sure the goods arrive on time is critical to the company’s success. “We’ve got a 97 percent on-time delivery rate,” notes Bob Warren, vice president of flight operations. “That’s what distinguishes us from our competition.”

“Price is, of course, the first thing a company is going to consider,” Connolly adds. “But all it takes is for the customer to get burned a few times by a low-cost provider that literally can’t deliver the goods as promised to realize that there’s more to the cost of air cargo than simple price. Delayed, or worse, lost shipments can easily wind up costing a million dollars in lost revenues and operational expenses. We’ve been in business for over 40 years, and our reputation is built on a long record of dependability and reliability.”

One major factor is the commitment to high quality maintenance to keep planes safely in the air. “We’re probably unique in that our insurance rates are going down because of our exemplary safety record in logging 30,000 hours without incident for 10 aircraft a week,” boasts Tom Pitzer, senior vice president, maintenance/material/engineering.

Patriotic Service
Evergreen’s reputation is also based on patriotic service. “Since 1976, we’ve been what’s called a Civil Reserve Air Fleet (CRAF) for the Department of Defense,” explains John Palo, vice president of planning military/government contracts. “Through the late 1990s, about 25 percent of our business stemmed from military contracts. After 9/11, however, this percentage rose to the point where now the majority of our fleet is devoted to government work.”

Indeed, Evergreen flew more than 350 missions during the 1991 Gulf War. More recently, Evergreen is providing similar support to military needs in Afghanistan and Iraq, and has flown some 270 missions for the Air Mobility Command in support of the war on terrorism. It has also flown UN peacekeeping support missions around the world in such trouble spots as Angola, Bosnia, Cambodia, El Salvador, and Somalia.

Nor are Evergreen’s government activities strictly military in purpose. A recent example is NASA’s Stratospheric Observatory for Infrared Astronomy (SOFIA) telescope mounted and flown on an Evergreen 747 at 45,000 feet. Expected to begin operations in 2005, SOFIA will be the largest airborne observatory in the world, capable of observations impossible for even the largest and highest of ground-based telescopes.

Del Smith’s Vision
This commitment stems from the vision of company founder and owner Del Smith, whose own personal history personifies the American success story – indeed, Smith was a 2002 Horatio Alger Award winner. From living in a one-room house without running water, Smith went to college to major in business and attended the Reserve Office Training Corps. At the same time, he was repairing crop dusters at a local airport, where he earned his pilot’s license by trading salary for flying lessons. After a stint in the U.S. Air Force, Smith combined his love of flying with his business and aviation knowledge, as well as service to his country, to start Evergreen Helicopters primarily as an aerial means to spread seed for major Northwest timber companies.

The company started with two helicopters. Since then, more than 600 aircraft were purchased for various purposes ranging from firefighting to logging to passenger service to leasing and resale. Most of these have been sold over the years as the company grew and redefined its business focus. Today, under the overall hangar of Evergreen International Aviation, there are seven distinct, but at times overlapping, business units. The helicopter business remains an important part of the flight plan, as does air freight. In addition, Evergreen provides a range of aviation repair, maintenance and overhaul services; aircraft parts, sales and leasing; ground logistics for cargo and baggage handling, aviation hub management, warehousing, airport security and property management.

These vertically integrated synergies further help position the cargo operations as unique capable of serving customer needs. “Evergreen is in the maintenance and repair business, so we don’t have to rely on outside providers,” Connolly points out. “In addition, our 747s are always stocked with spare parts we know would otherwise be difficult to obtain on a moment’s notice should a problem arise. That’s a key reason why we’re uniquely able to meet our delivery deadlines. If there ever is a maintenance problem, it’s resolved quickly and efficiently without ever compromising safety.”

Evergreen has also branched out into agricultural farming and nursery production. In a non-profit role, the Captain Michael King Smith Evergreen Aviation Educational Institute, named in honor of Del’s oldest son, an Air National Guard pilot who died in a car accident in 1995, promotes early flight history and honors the patriotic service of aviation veterans.

Humanitarian Aid
In addition, Evergreen has been active in numerous humanitarian activities. Since 1974, the company has been an active partner with the World Health Organization, specifically in the eradication of the black fly in West Africa, which has saved more than 20 million people from river blindness disease. Evergreen aircraft and crew regularly perform rescues of climbers in Alaska, and have transported doctors and medical supplies in the Himalayas and in Bosnia. In February 2002, Evergreen was the first commercial plane to fly a relief flight into Kabul, Afghanistan, carrying clothes, blankets, medical supplies and even feed for the animals in the Kabul zoo.

In 2003, Evergreen International generated about $300 million in revenue. Connolly says the current business plan is to expand that figure by 12 percent annually.

“The economy is improving, and international shipping is on the rise as more and more companies become global in their operations,” he points out. He adds that one way the company looks to expand its coverage is to partner with local and regional carriers around the world to provide end-to-end service, with Evergreen doing the international flying and the local carrier taking the shipment to its final destination. Evergreen is also looking to establish an air cargo system in China.

All of this points to new altitudes for success, built on an attitude of commitment to aviation quality, excellence in customer service, and efforts to make the world a better place.