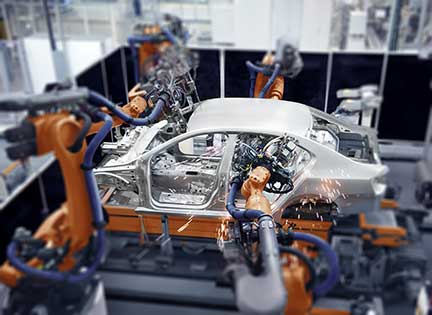 Because the Federal Reserve and the Labor Department are among the federal agencies that have escaped the shutdown, the official data on manufacturing’s 2018 performance is now in – at least preliminarily. And the verdict is clear – by several key measures, last year was industry’s best since the early days of the current economic recovery, when strong snapbacks in this highly cyclical segment of the economy are par for the course.

But these figures, which will revised several times more in the month to come, also show which sectors within manufacturing were pace-setters and laggards – i.e., where industry’s strengths and weaknesses lie.

Since strong job and wage performance is so difficult without strong growth, let’s look at the broad real output results. From December, 2017 to December, 2018, price-adjusted manufacturing production expanded by 3.44 percent. That was its fastest rate since the 6.31 percent increase registered between December, 2009 and December, 2010, when the current economy-wide recovery from the last recession was finally gaining momentum.

And at least partly as a result, manufacturing payrolls were up 2.37 percent – their best December-to-December improvement since 1992-1993 (at the beginning of that decade’s economic recovery). Real wages, however, lagged way behind these indicators. Their latest annual flat-line was better than the 0.37 percent annual decline experienced the year before. But it was nowhere near as good as 2015-2016’s 0.93 percent rise.

Look under the hood, though, and a big manufacturing dividing line quickly emerges – between the durable goods super-sector and its smaller non-durable goods counterpart. Since manufactured products of all types usually consist of many parts and components, as well as a variety of manufactured materials, the above federal agencies keep records on literally hundreds of industrial goods.

But to keep the detailed information in this effort manageable, I’ve broken manufacturing down according to what data geeks know as the three-digit level of the North American Industrial Classification System (NAICS) – Washington’s main system for slicing and dicing manufacturing data. In addition, because it’s such a newsmaker, I’ve also included some separate information for the automotive sector (vehicles and parts). Consistent with the NAICS system’s pattern of increasing the NAICS level as product categories become narrower, the automotive figures combine three different categories at the four-digit NAICS level.

After-inflation production of durable goods grew by 5.27 percent from December-to-December, 2017-2018. As with the output of manufactures as a whole, that was an eight-year high. (The 2009-2010 figure was a torrid 10.48 percent. Constant-dollar production of non-durables was up, too – but by only 1.56 percent. That rate was considerably lower than the previous year’s 2.42 percent.

The split is visible in the jobs numbers as well. Durable goods payrolls expanded during the last calendar year by 2.76 percent – the fastest rate since 2010-2011. For non-durables, the growth rate was less than half that: 1.44 percent.

And when it comes to real wages, the difference was even more striking. In the durables sector, they inched up only 0.62 percent between the two previous Decembers. But over those 12 months, they fell by 1.01 percent for non-durables.

Not surprisingly, the manufacturing sectors where real 2017-2018 output growth was strongest were durable goods sectors, with the top three being primary metals (up 8.36 percent – the best such performance since 2009-2010’s 12.88 percent, when its companies were bouncing back from a terrifying recessionary production nosedive); automotive products (where the 7.76 percent after-inflation output surge was the biggest December-December jump since 2010-2011’s 14.08 percent spurt); and computer and electronics products (whose 6.53 percent annual inflation-adjusted production gain was its best since 2011-2012’s 8.22 percent).

Of special interest, the primary metals sector includes the steel and aluminum makers that have received tariff protection since the end of last March, and the automotive industry is the kind of metals-using manufacturing sector that was supposed to get decimated by the tariff-induced increases in two of its most important inputs. And just as interesting – other heavy metals-using segments of manufacturing grew strongly as well, including fabricated metals products (up 4.79 percent between the last two Decembers) and non-electrical machinery (4.94 percent).

The three weakest output performances in manufacturing all came in the non-durables’ ranks. The worst was in apparel, where constant-dollar production during the last calendar year plunged by 5.45 percent (actually an improvement over the eight percent drop during the previous year). Next came the miscellaneous non-durables sector, whose 4.86 percent price-adjusted output shrinkage was also better than the 8.25 percent fall-off between 2017 and 2018. And finally came printing and support activities. Its real production sank by 2.81 percent – the most annually since 2013-2014’s 4.88 percent.

Oddly, manufacturing’s champion job creator in relative terms over the past calendar year was miscellaneous non-durable goods. The category is a small-ish employer, meaning that big percentage movements can be easy to generate. But the 5.10 percent increase in payrolls is noteworthy nonetheless, and the more so since during this period, real output shrank by nearly as much (4.86 percent).

By contrast, employment cratered on year by 4.57 percent on year in apparel, by 1.60 percent in printing and related support activities, and by 1.33 percent in textile products mills – all in the nondurables super-sector. The only durables industry that lost jobs on net in calendar 2018 was furniture (down 0.38 percent).

The strangest in-the-weeds results of all came in real wages. Although the non-durables super-sector significantly under-performed durables in this measure, the three specific industries where paychecks grew the fastest were in non-durables. They were textile product mills, where even though employment declined by 1.33 percent from December to December, inflation-adjusted wages climbed by 3.64 percent; petroleum and coal products (3.40 percent); and plastics and rubber products (2.88 percent). At least the last two saw employment improve as well.

In durable goods, the best real wage performer last year was automotive, where paychecks advanced by 2.32 percent from December, 2017 to December, 2018. The larger transportation equipment sector that includes automotive saw price-adjusted wages rise by 2.22 percent, and primary metals was the only other durables industry seeing constant-dollar hourly pay improve by more than two percent (2.05 percent).

It’s entirely possible that the most unusual results will change as the data keep getting revised – not only on a monthly basis, but for several years at a time in annual revisions that often change the numbers going back several years. And sometimes, the longer-term government revisions can be pretty substantial. For now, though the larger trends look clear. Manufacturing had a solid 2018, but the non-durable goods super-sector is looking pretty anemic.