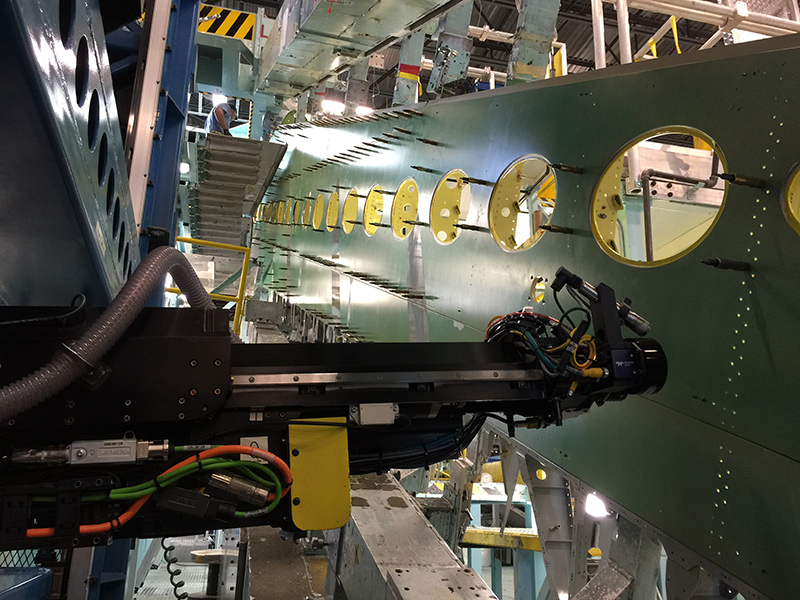 MHI Canada Aerospace (MHICA) is the only Tier 1 aerospace supplier in Ontario that builds complete wings and related systems assembled to OEM fuselage; in addition, the company performs systems and flight control assembly and testing. Located in Mississauga, five minutes from Toronto Pearson International Airport, it is only one of two aviation subsidiaries of parent company Mitsubishi Heavy Industries (MHI) located outside of Japan. The location puts the company closer to its customers, as over half of the top 25 aerospace companies located in Ontario. Plus, there’s an extensive aerospace supply chain infrastructure—some 220 Tier 2 suppliers are based in the province. As president and CEO Michael McCarthy points out, “We stand alone as Canada’s only heavy aero structures Tier 1 manufacturer with the unique capability to absorb and manage a large supply chain and build major aircraft assemblies. While our customers are themselves OEMS, thanks to our parent company’s long-term vision, MHI Canada Aerospace has itself become an OEM that is a respected strategic commercial supplier to the aerospace industry.”

Since landing in Canada in 1996, business has really taken off. “In our industry there is a typical seven year cycle of upward and downward movement, but in recent years we’re not seeing that cycle anymore,” McCarthy says. “Demand for commercial aircraft continues to increase and we don’t see that demand declining any time soon. The commercial airplane market for where we are targeting our growth is very strong with unprecedented order backlogs and a market forecast of $6 trillion dollars over the next 10 years.”

He notes that, “You don’t often hear of large complex manufacturing jobs moving from Asian countries to North America. MHI believed that investing in an operation here was the right decision for the current business and MHICA has demonstrated our capability to provide them confidence to now support future growth.”

Indeed, the company recently announced an overall $36.22 million investment in new equipment and facility upgrades to be completed by 2021. The expansion helps support the Bombardier Global 5000/6000 ultra long-range business jet program and Challenger 350 mid-size business jet, recently relocated from Japan, as well as an opportunity to better serve other North American OEMs. McCarthy also notes that, “The Canadian government is looking to replace its fleet of CF-18 Hornet multi-role fighter jets. While there is a lot still forthcoming about the government’s actual plans, we believe there is a ‘Build in Canada’ strategy where we can play a key role.” Most recently, in fact, Canada opted to buy used F/A-18 from Australia as an interim measure prior to procuring a new fighter fleet rather than follow through on a previous plan to assign a contract to U.S.-based Boeing.

Alex Tsoulis, business development director, also points out how higher utilization rates, which allow airlines to increase revenues by lowering fixed costs per unit, are driving new demand. “Aircraft that used to be in service for eight hours a day are now working 10 to 12 hours. To do that efficiently you need newer aircraft with lower fuel-burn rates.”

Tsoulis also points to a growing trend of aerospace OEMs locating their manufacturing centers on the eastern North American seaboard. “In the United States, major OEMs are established in South Carolina, Georgia and Alabama. In Canada, Toronto and Montreal are growing hubs. MHICA’s proximity is yet another factor contributing to the growth of our business.”

The planned expansion is expected to add 90 jobs taking the current roster up to 830 employees. The largest percentage of these represent skilled assembly workers. “Thanks to the large aerospace presence in Ontario, there is a built-in labor pool for the kind of workers we need,” McCarthy says. “We also continuously recruit new talent through universities and colleges as well as job fairs. MHICA also runs our own apprenticeship program in partnership with the Ontario Aerospace Council, the Ontario Manufacturers Learning Consortium and the Province of Ontario. Currently we are running two shifts of 12 students each. The program has been so successful we’ve even recruited and trained candidates for some of our local suppliers.”

In addition to its 270,000 square-foot Northwest Drive plant in Mississauga, MHICA operates two other facilities to bring the total manufacturing footprint to 385,000 square feet. “We are planning for near term site expansion that will provide an opportunity to introduce additional complimentary capabilities and offer us green space for near term growth,” McCarthy says. “Large part sub-assembly, final assembly, systems installation, rigging and test is our core competency. Parts fabrication and small sub-assembly is performed through our extensive supply chain network. Approximately 65 percent of those suppliers are located in Canada.”

Like any manufacturer, MHICA continuously seeks to improve production efficiencies. “We have introduced kaizen and lean manufacturing techniques to eliminate waste and reduce assembly flowtime” McCarthy notes. “Just one example is providing mechanics with programmed iPhones to transmit job status and labor needs right at their job station to replace the use of community clocks. Another was a team effort to eliminate the manual shaving of machine-installed rivet parts, which helped increase the speeds and setups on our automated riveting equipment.”

He adds, “We utilize flexible, advanced manufacturing processes and automation designed to work directly alongside our production employees. Auto drilling and riveting machines, for example, are operator-assisted processes that provide first time quality and enhanced safety, along with increased efficiency.“

On the engineering side, McCarthy notes that, “Our customers are always looking for ways to increase the performance of the airplane for the operators. As design/builders, our company offers critical engineering support to not only solve problems, but to design in and modify existing design. Enhanced wing symmetry and weight reduction are key examples for increasing range and reducing fuel burn.”

Asked about MHICA’s key competitive differentiators, McCarthy cites a culture of innovation, employee commitment, and effective training coupled with successful working partnerships both within the aerospace industry and with government and academia. “The overall aim is to take away risk. Because we have access to educated and skilled talent, and strong employee engagement, we reduce quality risks. Our location near major OEMs as well as local suppliers reduces risks of supply chain management. Since We are in a geographic region that is environmentally stable – we don’t have major hurricanes, earthquakes or natural disasters. We are in a well connected social and economic environment that is stable, there’s little risk of supply chain interruptions.”

He adds, “As MHICA continues to grow, we work to foster the best possible relationships with our employees, our suppliers and our customers. We have a strong ‘working together’ and business-driven culture that focuses on continuous improvement, customer satisfaction and growth. MHICA is favorably positioned to provide Tier 1 aerostructures capability with a very competitive cost structure, with ability to scale up our supply chain to offer North American OEM customers the best solutions with little risk.”