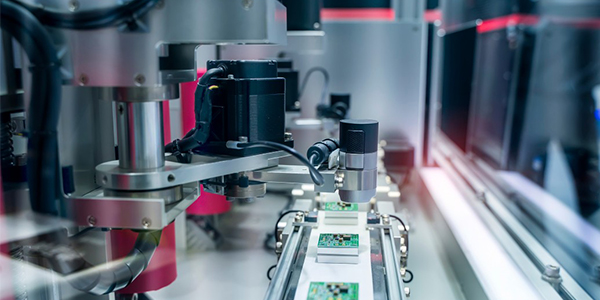 In an old western movie they might say: “Move over; there’s a new sheriff in town.”
Well in the case of UNOVIS Solutions, there’s not exactly a new sheriff but a new way of enhancing assembly solutions in town. But everyone still has to move over.

While you may not recognize the name – not yet – you may recognize the two companies whose respective divisions gave synthesis to UNOVIS: Universal Instruments and Hover-Davis.

“The merger is structured to let the four divisions achieve their full potential by leveraging critical mass and generating additional market opportunities,” a press release on the merger states. UNOVIS began operations on July 19, 2006, and is led by Roland Heitmann, formerly General Manager of the Hover-Davis Direct Products Division.

With a clear global strategy and organization in place, UNOVIS will focus on state-of-the-art process and assembly solutions, and will differentiate itself through extensive application, integration and process knowledge for customers in the automotive, component assembly, telecommunications and medical industries. Its products and services include component and die feeders, transport systems, process peripherals, flexible process cells, and complete turn-key assembly systems, all complemented by an extensive array of laboratory services covering product and process design, development, optimization and testing.

“Before the merger, these divisions were getting secondary consideration and focus in their respective companies,” relates Heitmann. “We thought, `Wouldn’t it be a great opportunity to separate out these divisions, fully leverage their synergies, and put them in a position to reach their full market potential.’ As we brought them together, we began to look at our core competencies, knowledge and experience, and equipment sets as applied to specific markets. We realized we had some of the best kept secrets in the industry, including our world leading labs and our process knowledge for advanced SMT, flip chip, and light mechanical assembly. We have some leading companies coming to us for advice and support, so the main question was, “How can we connect this knowledge in a much more comprehensive way with the potential customers?”

The other side of the newly formed UNOVIS was founded in 1989 by John Hover and Peter Davis. Hover, a former Eastman Kodak engineer, recognized the opportunity for a competitive after-market tape feeder supplier. Seeking creative horsepower, John partnered with long-time friend, Peter Davis, also a former engineer at Eastman Kodak. Together, they began developing successful component delivery products and quickly established a thriving business.

Enabling the Marke
One of the trends the new UNOVIS is responding to is electronics convergence. The lines are blurring between the realms of traditional semiconductor package, printed circuit board, and final product assembly. With the proliferation of electronics into virtually every aspect of our lives and every environment, there is a higher demand for unique assembly solutions.

UNOVIS Solution will focus its effort on tailoring solutions for customer applications in the semiconductor, automotive, and medical markets. Specific applications include high-end semiconductor packages such as SiP (System in Package), flip chip, and multi-chip modules, as well as automotive control modules, pace makers, hearing aids, a wide array of sensors, and other complicated assemblies.

“We can provide complete production lines for the entire assembly, providing not only the equipment, but a fully optimized assembly process with the highest possible yield integrated into the customer’s manufacturing environment. We also focus on partnering with our customers from very early in their product lifecycle. By working together, we can virtually guarantee a significant shortening of their time to market, while producing products with higher yields and reliability and lower cost,” Heitmann says.

One of the biggest changes in our business model, he adds, is in focusing less on the box and more on the process. “We have some of the most in-depth knowledge in the world, which is validated by the number and types of companies that are working with us,” Heitmann adds. In addition to product and process development and optimization, UNOVIS’ process services group, can perform a wide variety of materials analysis, package and board design, failure analysis, and reliability testing. “We are one of the few places you can go to analyze any assembly problem, determine the root cause, define an effective corrective action, and then help you implement it. These unique capabilities give our customers a competitive edge.”

With two plants in Binghamton and Rochester, N.Y., the company employs 120 people. “In the advanced semiconductor arena, we’re work as a customization shop; we leverage the capabilities of standard equipment available in the marketplace and develop it into a specialized solution,” Heitmann says.

The Technology Remains
While the name has changed, the company is still offering the leading line of products that put it on the map. These products include the Polaris Assembly Cell that solves the challenges of odd-form assembly in electronic manufacturing and addresses a range of light mechanical assembly processes for products as diverse as medical instruments, small automotive subassemblies, toys and games, and office products. Polaris provides superior and higher quality throughput than manual assembly, bridging the gap between robotics and standard PCB assembly equipment, and delivering cost-effective solutions that increase profitability.

Other products include the solutions for high end flip chip and mixed technology assemblies, which reduces the cost of entry to advanced semiconductor assembly. Leveraging the technology utilized in standard surface mount assembly equipment, such as linear motor drives and precision encoders, allows customers to work with advanced packaging technologies in commercial volumes. To transform standard surface mount equipment to address the needs of high performance advanced semiconductor assembly, UNOVIS has developed high-resolution imaging capabilities, optimized lighting, fluxing technology, and specialized component feeders to create robust and flexible solutions with maximize accuracy and productivity. These solutions can be used for advanced packaging, including placing flip chips on boards, on flexible printed circuits, and in multi-chip packages.

The company also offers several versatile material dispense solutions to help eliminate bottlenecks, without the commitment of dedicated dispense equipment. These machines can be adapted with a multitude of dispensing heads and technologies, and combine powerfully with both mixed-vendor lines to increase versatility and boost throughput.

Recently, UNOVIS Solutions launched a new line of tape feeders compatible with the Siemens SIPLACEr family placement machines under the Hover-Davis brand. SSF feeders are specifically designed to enhance line operation and productivity. Utilizing Hover-Davis’ unique feeding technology, the feeders eliminate many of the frustrations encountered during normal production, and will enhance any line – affordably and intelligently. The complete range of feeders, from the triple lane 8 mm up to the single lane 56 mm, offer users significantly lower cost of ownership, including savings on initial purchase price, combined with significant improvements in ease of use and lower cost of maintenance. The feeders also come standard with a Cogiscan RFID smart feeder tag for set up validation and traceability.

United as one strong company, we will be able to leverage the synergies of the different groups in ways that were previously not possible, Heitmann says, allowing us to no doubt propel the business forward.

“Previously, the different divisions acted as four separate small businesses. Now, as a combined unit, we’re a profitable company with over $40 million in revenues” Heitmann says. “This enables us to address the business in a more comprehensive manner. We are establishing Technical Centers in both Asia and Europe, allowing us to address the needs of our global customer base on a local basis. The big differentiator in our business is knowledge and expertise, and we need to bring it to our customers to become more of a local force.”