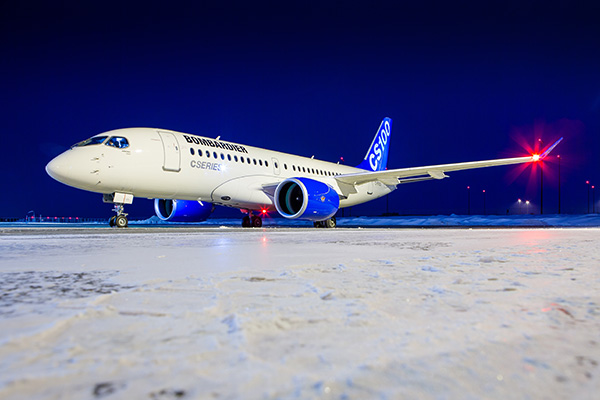 When Bombardier provides facts about the aerospace market, you stand up and listen. That’s before, of course, you enter one of its new, state-of-the-art CS100 or CS300 commercial aircraft, place your roller bag securely into a wider overhead bin, sit in a seat that affords you more space and comfort, gaze across a larger aisle and out a window that is 50 percent bigger and higher in the fuselage, delivering uninterrupted views of that sky you’re flying across.

Your presence on that flight speaks to market reports, like Bombardier’s 2015-2034 market forecast, telling of the growth and profits experienced by commercial airlines. “In emerging markets, demand for air travel is growing with increasing GDP and an expanding middle class,” the report states. While lower oil prices “may permit airlines to delay the replacement or retirement of less efficient aircraft types, … in the long-term, fuel efficiency will remain a key driver of airline fleet decisions. Most new 60- to 150- seat aircraft deliveries to mature aviation markets will replace retiring aircraft fleets.”

And in another assessment of the market: “Economic and technological obsolescence, as well as environmental regulations, are expected to drive aircraft retirements throughout the forecast.”

What’s good about aircraft retirements? Replacement aircraft are needed, of course. That is where Bombardier Aerospace sees good fortune, in demand for its CS100 and CS300 Series aircraft, which satisfy the needs of a burgeoning market.

In recent news, Bombardier’s Commercial Aircraft Division, with two facilities in Mirabel and Toronto, Canada, has locked in a multi-billion- dollar order for 45 CS300 aircraft from Air Canada: Worth US$3.8 billion at list prices, the order’s value could reach $6.3 billion if Air Canada exercises contract options for an additional 30 jets. In addition to this order, the company has also received an order from Delta Airlines for 75 CS100 planes.

“I’m pleased to officially welcome Air Canada to CS300 family of operators as one of our largest customers and early adopters,” Alain Bellemare, the Montreal-based plane and train maker’s president and CEO, said at the time the order announcement was made. “As an innovative operator, admired for successfully reinventing itself and, like Bombardier, based in Québec, Air Canada and the C Series aircraft are a perfect match.”

“This order is a major statement of support for Canada’s aerospace industry and will help support thousands of C Series related jobs,” Bellemare added. “It also serves as an important catalyst for renewed interest and subsequent orders.”

Ross Mitchell, Bombardier’s vice president of commercial aircraft, said the company designed its CS100 and 300 planes for the 100- 150-foot market, which, as the oldest segment in the commercial market, is currently “underserved.”

“We believe there will be a market for up to 7,000 of these aircraft in the next seven years,” he said.

Bombardier’s C Series offers several features that go over and above what is offered by the competition. One hundred percent new, from nose to tail, the aircraft are optimized for the 100- to 150-seat market segment. The C Series family offers a 15-percent cash operating cost advantage and over 20 percent fuel burn advantage while delivering best airfield performance with a transcontinental range.

But before customers take advantage of all that comfort, added width, cash savings and smooth flying, look into what makes these aircraft truly unique, from nose to fuselage.

Mirabel Airport is the place where Bombardier assembles its C Series, with 3,000 employees and 2 ó million square feet of facility space. The company’s testing facility, Toronto/Downsview Airport in Toronto, features a 7,000 foot runway and 370 acres with 4000 employees.

Both facilities are testament to the fact that Bombardier has its hands around the form and function of aircraft as owners of two facilities that offer innovative, state-of-the-art operations.

What else makes the C Series special? In addition to a 100-percent, all-new design, The CS100 and the larger CS300 aircraft represent the fusion of performance and technology to offer operators potential savings of between USD$ 7.5 to 12 million per aircraft. Bombardier has placed considerable emphasis on cabin design to ensure an excellent passenger experience. The C Series aircraft’s larger seats, overhead bins and windows create a wide body feel that offers passengers unparalleled comfort.

By focusing on the 100- to 150-seat market segment, Bombardier has designed the C Series aircraft to deliver unparalleled economic advantage to operators and to owners.

Mitchell said that Mirabel is where the C-Series is assembled, with parts coming in literally from all over the world – wings from Belfast, fuselage from China – utilizing the latest in cutting edge equipment, including lasers and global positioning systems, to put it all together.

“Because we design planes simultaneously, they have more than 99 percent in common in terms of the fuselage,” says Mitchell. Enhancements included extending the mid-fuselage slightly in the CS300 and reinforcing the center wing blocks. “The planes also burn up to 20 percent less fuel; they reduce emissions, and also reduce NoX (mono-nitrogen oxides), which are burned up inside the engine.”

Another advantage is noise reduction. “These planes have a noise footprint that equals our turbo prop aircraft, recognized as the quietest aircraft in the world,” Mitchell said, adding, “That’s important to airlines.” Bombardier has also lowered maintenance and weight on its CS Series, offering overall better fuel economy.

What About The Passengers?

In the end, the passengers are going to notice what is inside the plane. Reviews so far have agreed that there is nothing not to like.

“When we started 10 years ago to design these aircraft we decided to focus on passenger comfort,” Mitchell said. This is when designers and engineers opted to install up to nine-inch wide seats, which are two inches wider than the competition, in a 2-seat, 3-seat configuration, so couples and families can sit side by side or front and back. Unless the aircraft is 80 percent full no one sits in the middle seat, and the odd number seating is designed to accommodate families.

The C Series aircraft also are built with wider aisles, so that someone can walk pass the galley cart in the aisle without the attendant having to back up the cart.

The C-Series also offers the largest bins in the single-aisle class, fitting 110 roller bags just in the bins. “A big challenge is to make sure people get their carry-ons on the plane,” he said. The C Series exceeds in answering that challenge.

Windows are also 50 percent larger and higher up in the fuselage, to afford a better view and more light. Lavatories are appropriately sized, with built-in features for people with reduced mobility.

With innovative cabin design essential to a comfortable flight, it’s the cockpit where the real flight essentials are necessary to give pilots optimum control.

For one, the C-Series has incorporated the Fly-by-wire (FBW) system, that replaces manual flight controls with an electronic interface, so that the movements of flight controls are converted to electronic signals transmitted by wires and computers determine how to move the actuators at each control point.

In the 100- to 150-foot market, since the launch of the new C Series, Bombardier has gained a more than 50 percent market share. “We’ve design these planes for that market. We’re setting the trend – we can offer customers efficiencies and get them out of short and congested runways.”

Bombardier, on the whole, has been made better because of its concentration on building better aircraft, such as the C Series, he said. “Bombardier is a different company today than it was even two years ago,” Mitchel said. ‘We’ve made significant progress.” In particular, he noted, the C Series “has delivered on all promises” and has furthered the company’s position “as a leader in the single-aisle, 150-foot market.”