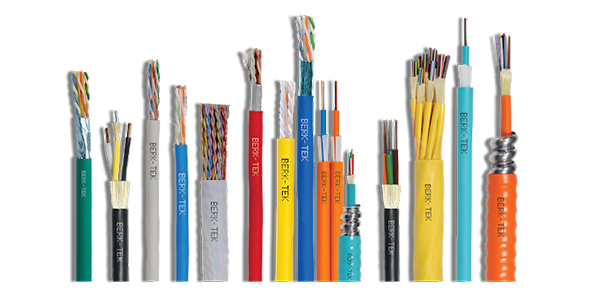 In the information technology industry, the future is now. New products are continually introduced as users upgrade to faster, more efficient and more complex data, voice and video equipment. But even as these new products hit the market, still more next-generation technology is flying off computerized drawing boards and into the testing/manufacturing process.

The rapidly evolving state of computerized technology is expressed in Moore’s Law. The co-founder of Intel, Gordon Moore stated in 1964 that the number of transistors per square inch in integrated circuits would double every year. That time span was later revised to 18 months and continues to hold.

Denser computer chips allow for faster processing of more data. It follows, then, that data transmission requires cables that can handle the tremendous data load efficiently. Designing and manufacturing that cabling is the business of Berk-Tek, a cable maker that has more than kept apace with the flow. This 40-year-old company is already making cables to accommodate the volume and velocity of future systems.

Todd Harpel, Berk-Tek’s marketing manager, describes the Pennsylvania-based company’s expertise as follows: “Our core competency at Berk-Tek is the manufacturing of enterprise-network infrastructures. We divide our products into two categories — copper and optical-fiber cable products. Berk-Tek is best known for its high-quality, high-performance products.”

As to succeeding in an industry where newer is definitely faster, Harpel focuses on the practicalities. “A cable system must last five to seven years,” he says. “The networking industry speeds up the upgrades, so the cabling will go through two to three generations of network electronics. In most infrastructures, you’re dealing with a lot of data and dealing with it fast. The infrastructure must support the need. One example of this is streaming video with audio. What you get has to do with the electronics plus the cable. “

From Copper to Fiber
Berk-Tek’s product lineup is currently dominated by the copper systems, but Harpel sees that changing in the not-so-distant future. “Now, optical-fiber cables are primarily installed as backbone infrastructure between floors in a building or between buildings,” he says. “We see the future as one with much more capacity and speed, where optical fiber will become the cable of choice. Copper won’t be able to compete. Optical-fiber cable will eventually connect individual computers to the network.”

Harpel’s point about the prevalence of copper wiring — which is the wiring for the telephone system and, therefore, the most pervasive technology — is underscored when he discusses Berk-Tek’s top seller — LANmark™-350 5e, an enhanced category 5e cable. He explains, “LANmark™-350 has been the highest-performing cat 5e cable on the market since it was introduced in about 1994. We now have better cables from a transmission or frequency standpoint. However, this one has been able to serve the majority of existing network applications as well as the most recent developments in the networking industry. We now offer the higher-performing category 6 cables, but they are in the infancy of their life cycle and LANmark™-350 remains our most popular product.”

Harpel identifies these highly successful category 6 copper products as LANmark™-1000 and LANmark™-2000 copper cabling systems, which can handle 250 megahertz and 350 megahertz, respectively. These cables meet the future standards now being codified by the Telecommunications Industry Association, the group that sets the standards for this technology. According to Harpel, Berk-Tek participates actively in the association and decided to create new products to meet the new standards in advance of their adoption.

The Berk-Tek optical-fiber products now making their way into its customers’ systems include Advetum™ cabling for indoor and outdoor installations, and GIGAlite™ for high-bandwidth, low-attenuation and longer-distance gigabit Ethernet systems. The company’s optical-fiber products are already installed at the New York Stock Exchange, the National Institutes of Health and the National Security Agency. They are also used in hospitals, police stations, universities and office buildings throughout North America.

Process Counts
A key to Berk-Tek’s success in the marketplace is the quality built into its cabling. The company continually invests in advancing its technological expertise and facilities. All Berk-Tek facilities are certified for ISO 9001. Its products are independently verified to ITS ETL SEMKO, Underwriters Laboratories and Bellcore qualification standards, and the company’s local-area-network laboratory is a UL-recognized testing site.

Berk-Tek’s headquarters in New Holland, Pa., occupies more than 300,000 square feet and houses the manufacturing site for the company’s UTP cables, which support high-speed data and voice transmissions. A 152,000 square-foot facility in Elm City, N.C., is home to the Electronics Cable Division, a primary manufacturer of cables for the telecommunications-carrier industry. Fuquay-Varina, N.C., is the location of the Electro-Optic Products Division in a 50,000 square-foot building, where single-mode and multimode fiber-optic cables are produced for use in local and wide-area networking applications. A total of 700 employees work at these facilities.

Since June 2001, Berk-Tek has been part of Nexans, a $4 billion corporation based in Paris. Nexans was formed as an initial-public-offering spinoff of Alcatel, the company that had acquired Berk-Tek from Joe Boscov, its founder. Boscov started the company in 1961, and its first big product was the SonaBuoy, which became a key component of the U.S. Navy’s anti-submarine warfare program.

Boscov’s $16,000 in seed money grew to a $200 million business, changing its name from Berkshire Technical Products to Berk-Tek along the way and moving to the New Holland site in 1984. The company entered the premises UTP market in the early 1990s, just as the network cable market came into its own. Alcatel Alsthom, the world’s largest telecommunications company, purchased the business in 1993.

Tech Trends
Harpel is clear about Berk-Tek’s objective. “Our goal for 2002 is to increase our market share and become the No. 1 supplier for enterprise networking in the United States,” he says. In addition to developing products that meet future transmission needs, Berk-Tek is investing in research and development that will keep it at the front of the leading edge in technology. Harpel points out that Nexans has invested “significant funds” in creating a competence center in New Holland, and that Berk-Tek has access to this state-of-the art R&D operation and the expert staff.

Berk-Tek has also formed a marketing alliance with Ortronics, Inc., a company in New London, Conn., that makes connecting hardware. Under the banner NetClear, this alliance markets complete end-to-end solutions to information technology planners and managers. Berk-Tek and Ortronics have jointly engineered their products to ensure that the components work together optimally. These moves and others continue to move Berk-Tek close to its goals, for 2002 and beyond. To customers, colleagues and suppliers, Berk-Tek has become one very well-connected company.