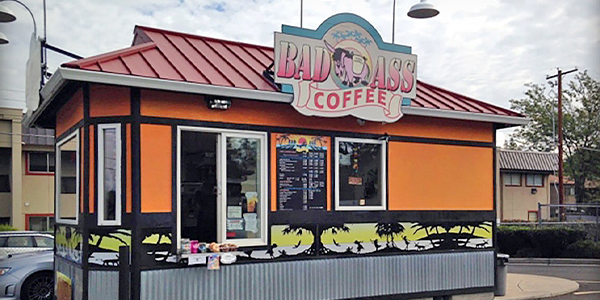 Right off, the name tells you this isn’t your average, run-of-the-mill kind of business venture. The corporate Web site for the Bad Ass Coffee Company™, a coffee bistro franchiser that features Hawaiian gourmet brews, explains the moniker this way:
“The native people of Kona, Hawaii, remember the days of the “Bad Ass Ones.” The bellows of the donkeys could be heard echoing through the mountains as they hauled the heavy loads of coffee up and down the mountainside. In honor of these hard working donkeys, we named our coffee company.”

And while these hard working donkeys, called the “Kona Nightingales,” serve as the cute corporate mascot, you know that the name is also intended to convey what permeates this company’s corporate culture – attitude. It’s what the company terms “Aloha Spirit,” defined as the positive outlook of an uncompromising attitude towards its products, its stores and store owners and the service it provides.

That it’s the right attitude is witnessed by its growth during the past 15 years to 45 stores throughout the United States (including, of course, Hawaii), with plans to expand further not only domestically, but overseas. Underpinning this success is a distinctive world-class coffee made from beans grown in a small field in Kona, Hawaii that measures only two miles wide and 25 miles long. The Kona Coffee belt is home to more than 500 farms, most of which are only three to five acres, with only modest facilities and equipment. These farms total approximately 2,000 acres of planted coffee, which annually yields up to six million pounds of beans. Brazil, on the other hand, produces more than one billion pounds of beans per year.

“There’s not a lot of it, and when the season’s crop is gone, it’s gone,” explains Connie Alexakos, vice president of marketing and product development. “But it isn’t simply scarcity that makes the Kona bean so desirable – it’s the mild and mellow, nutty flavor, with low acidity.” The company touts no less an authority than Mark Twain, who in 1866 wrote, “Kona Coffee has a richer flavor than any other, be it grown where it may and call it by what name you please.”

While the coffee is easy to swallow, the price may not at first seem so. “Kona Coffee in its pure variety, not blended with any other coffee, commands $40 to $50 a pound on the retail market. As massive as the gourmet coffee industry has grown, with over 500,000 gourmet coffee shops currently in the USA, very few offer 100 percent Kona, by the bean or by the cup because of its low profit margin,” Alexakos says.

Two key factors enable a pricey coffee to thrive, however. Alexakos draws the following analogy: “If you’re a bourbon drinker, you know there’s a range of quality, from the ‘rotgut’ to the extremely smooth. And, if you’re a bourbon drinker, you have no problem paying more for that smoother brand. The same is true of coffee connoisseurs. Higher, distinctive quality results in a more pleasurable drinking experience that justifies the extra cost.”

Equally important is the Starbucks phenomenon, While it may at first seem counterintuitive that a seeming competitor would be thought of as a reason for the growth of the Bad Ass Coffee Company, Alexakos points out the actual benefit. “We absolutely love Starbucks because they’re the company that got consumers used to paying four dollars for a cup of coffee. We simply couldn’t sell Kona coffee if people were expecting diner prices.” She is quick to add that, “In fact, we don’t see Starbucks as a competitor. They have a very different flavor profile than we do. Our coffee is smooth, mellow and rich. We roast on the light side of the roasting scale leaving the flavor of the bean to shine through. And it’s not necessarily that we’re going after different types of customers. Coffee drinkers like to try different things, depending on their mood. We offer Starbucks drinkers something different. I’m sure our customers go to Starbucks sometimes, too, which is fine. But, of course, they always come back.”

Given that the distinctive coffee on which Bad Ass differentiates itself is in limited supply, the company has had to balance that against the desire for expansion. “Obviously, we couldn’t be growing if we relied just on 100 percent pure Kona coffee – we’d run out of product. So we do offer an Hawaiian Signature blend made of 10 percent Hawaiian beans combined with other premium beans from around the world,” Alexakos says. “We also offer other Hawaiian coffees from Moloka’i, Kauai, Maui and Oahu. Again, in all cases, the result is a smoother, milder coffee. “

Further distinguishing Bad Ass Coffee is the fact that it is a “Made in America” product. “A lot of people today are concerned about foreign labor practices and will only buy Fair Trade coffee,” Alexakos notes. “What a lot of people forget is that Hawaii is part of the United States, and fair trade organizations only certify coffee from third-world nations. All of our coffee farms are subject to U.S. law, and cannot use unfair labor or production standards. That’s another reason why Kona coffee is expensive. So any consumer concerned about exploitation of workers can drink in any of our stores in good conscience.”

Alexakos emphasizes that the Bad Ass Coffee Company is a franchiser, not a grower. Indeed, the company is headquartered in Salt Lake City, Utah, not Hawaii. “We deal with the two primary companies in Hawaii, Greenwell Farms, (Tommy Greenwell is the granddaddy of Kona coffee), and also Captain Cook. Both are great companies to work with.”

Indeed, “great people” has been key to continuing franchise growth. Alexakos emphasizes that the success of the franchiser is inextricably wound into the success of the franchisee. “It’s a hard job to build a business. In a tourist area, with a lot of traffic, it’s a little easier because people want to try out things and they have money to spend. But when we opened a store in Dylan, Montana, which has all of 5,000 people in it, I admit I wondered if this was going to work. I mean, have you ever been to Montana? Not exactly the first place to come to my mind to open franchise. Yet, Dylan has one of our most successful stores. That’s a testament to the owners who worked real hard to get people into the store, and most importantly, to get them to want to come in as regular customers.”

She adds, “Even in our stores in Hawaii, which have a lot of tourist traffic, it’s interesting that the locals make up a large portion of the customer base. Good product is part of that, of course, but it’s also a testament to the owners that they’ve developed a relationship with people that makes them continue to frequent the store. It’s developing the ‘Cheers’ concept – a place where everybody knows your name.”

Of course, that whole underlying notion of the corner coffee shop, and the franchise framework, expands on that by providing a certain distinctive ambience, these days incorporating Wi-Fi access, that entice people to hang out. And even if they’re not buying cup after cup of coffee, the fact that people are hanging out makes other people think it might be a cool place for them to go.

Branding with a Difference

However, the traditional franchise model is to standardize this experience so consumers have the same expectations whether they’re in a store in Dubuque or Dallas or Duluth. This is another area where the Bad Ass Coffee Company marches to a different drummer. “Each store is custom designed to fit the locale. Even while the Hawaiian theme defines the brand, we want to integrate the brand image into something that is unique,” Alexakos says. “Three years ago, we partnered with Land Mind Productions to custom design and install each of our stores. The founder and president of Land Mind is John Foote, a Hollywood art director for television and movie shows who still does freelance set design in that industry. He brings that kind of sensibility to the design of the store to make something that is always visually stunning and compelling. This is not your typical ‘out-of-the-box’ kind of box store, by any means.”

But a good store doesn’t thrive on look alone. “In Italy, a barista has had five years of training to understand the chemistry of coffee,” Alexakos notes. “Most coffee bars have a standardized process to draw a cup of coffee. But a variety of factors, such as humidity, affects the taste of the coffee that winds up in your cup. So you just can’t do the same thing every time, every day of the year, regardless of what else may be going on in the store environment. Our baristas are trained to ‘draw the perfect shot,’ to use their judgment and experience to change the grind or whatever is needed to make the best possible cup of coffee. Ours is not an assembly-line approach.”

That approach is paying off, with the planned 100 locations by the end of 2007. Yokahoma, Japan , not far from Tokyo, opened two years ago and our franchisee plans on opening 99 stores in that country over the next 10 years. “The Asian population loves American products, and we feel this part of the world represents a very good opportunity for us.”

Alexakos notes that the franchise can’t continue to expand just by resting on its laurels. “We are looking into providing organic coffee, which is a growing segment overall in the food industry. Specialty drinks also help keep people interested. We’re considering adding some kind of food preparation and right now we’re considering what kinds of deserts might be the best fit and if there’s any suitable opportunities for us to partner with a company that has the quality food that would best complement our product. Currently, we also offer teas. We’re not as knowledgeable about teas as we are about coffee, but we will be; that’s an area we intend to get better at.”

That said, the Bad Ass Coffee Company isn’t going to be straying from its core competency – there’s little likelihood of it ever becoming the Bad Ass Takeout Place. “The reason you go into a Cinnabonn is to get a cinnamon bun, right? You come to us to get the best coffee. And you’ll probably have a better time doing it.”

The growing number of customers at the Bad Ass Coffee Company will, no doubt, drink to that.

For questions about The Bad Ass Coffee Company, please fell free to contact Connie at ca@badasscoffee.com or call us at 1-888-4 BADASS.