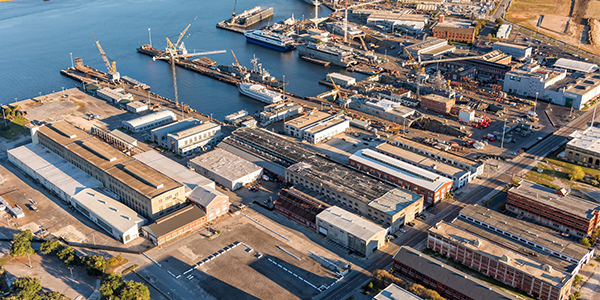 Detyens Shipyards, Inc., has been in the business of refurbishing, repairing and upgrading vessels since 1962, when William Detyens, a merchant mariner, founded the operation. Detyens built his shipyard on the Wando River in Mount Pleasant, S.C. — a location near the Charleston Naval Yard and Navy Base, a repair facility for nuclear submarines. For the next 34 years, DSI provided repair services to both naval and commercial vessels.

In the 1980s, D. Loy Stewart, the founder’s son-in law, bought the yard and looked to develop new markets. At that time, naval ship repair was the major part of the business — a situation that was about to change with the end of the Cold War and the downsizing of the U.S. Navy. When the Navy closed its Charleston yard in the mid-1990s, Stewart saw an opportunity to expand Detyens’ operations. “The Navy was going to lease the shipyard to someone, so why not lease it to a local group? We felt we were as qualified as anyone and, having been in the community for 30 years, we had an extra incentive to make it work,” Stewart says.

Detyens presented its expansion plans to the Charleston Naval Complex Redevelopment Authority (CNRA), the agency charged with finding commercial and public uses for the government site. The CNRA awarded Detyens a lease on three major dry docks. In 1996, the company moved into the facility on the Cooper River in North Charleston. The former Navy base, now the largest commercial shipyard on the East Coast, has 33 marine and industrial companies that serve the Charleston port.

The Tide Comes In
Building on its established reputation for taking on complex projects on smaller vessels at the Wando yard, Detyens set out to expand operations both in the size of the vessels it services and in the volume of its jobs. Emphasizing the importance placed on customer service and quality, Robert Bowers, executive vice president, says, “We are a strong believer that the customer’s perception is reality. If we can deliver quality work at fair value and provide on-time delivery, we will get repeat customers.”

In 2000, Detyens increased its personnel count from 200 to about 800 in the new, larger main yard. The company’s original yard is still in use and employs between 100 and 150 workers. The company’s headquarters are at the North Charleston location. At its Cooper River facility, Detyens works out of three large graving blocks that measure 622, 596 and 751 feet in length, and can handle tonnages of 17,000, 18,300 and 25,500, respectively. Drafts range from 30 feet to 33 feet. The site also offers extensive crane service, a flexible work environment (including cross-craft policies) and six piers.

Detyens’ marketing initiatives and the expansion of its facilities have brought about the remodeling of its business. In the period between the mid-1970s to the mid-1980s, about 80 percent of the company’s work was for the U.S. Navy. Now, approximately 80 percent of the jobs are for commercial customers. The large commercial lines that use Detyens for repairs, upgrades and refurbishing include Maersk, Marine Transport Lines, Keystone, SeaLand, Tyco Submarine Systems and Seaboard Ship Management.

An example of Detyens’ prowess in the commercial pool is its recently completed major conversion of the LNG Carrier Arzew. The company refurbished the Arzew, which had been inactive for 18 years, with new communications systems, navigation systems, cargo systems, steering gear and a complete boiler overhaul. Detyens also inspected and tested every system on the ship, which was renamed the Galeomma and is now chartered to Shell Bermuda Overseas Ltd.

Ships into Shape
The balance of Detyens work comes from naval repair and the U.S. Navy Foreign Military Sales program (FMS). Since 1996, Detyens has had a 10-year contract to provide conversion and repair capacity for the FMS program. The company averages two of these projects per year. This work includes the activation of laid-up ships; the refurbishment of machinery, piping, electrical and combat systems; and upgrades to former U.S. Navy Perry Class frigates and Knox Class frigates.

Commenting on the extra advantages of Detyens’ main yard, Bowers says, “Because we are in North Charleston in the former naval shipyard, we have facilities that others can’t afford, and it gives us greater capabilities than others have. For example, the shipyard has barracks and galleys that the company can use to house customers’ crews at rates cheaper than hotels.”

An innovative technological service offered by Detyens is the use of ultrahigh-pressure water blasting as an alternative to grit blasting. Explaining the value of this choice, Bowers says, “Water is more friendly to the environment. It doesn’t put all that dust in the air, and it eliminates dealing with used sand grit disposal as well. We started using this in 1996 and now we’re 100 percent hydroblasting at all our shipyards.”

In charting its course, Detyens has set its sites on continued growth in the commercial market. According to Bowers, “We need to be in front of the right people at the right time, and provide quality service and on-time delivery because these customers are demanding quick turnarounds.” A smart tack in today’s competitive nautical market.