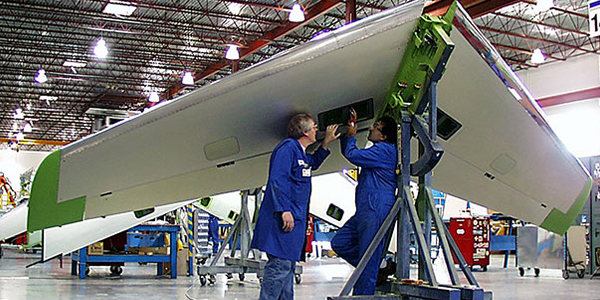 Avcorp Industries Inc., a leading manufacturer of aircraft components, actually started out with its focus on the water. That was back in 1956, when the business – known then as Canadian Aircraft Products – designed and manufactured aircraft floats for planes that landed on bodies of water. You might say that business took off and subsequently navigated its way into becoming a multifaceted manufacturing operation for components and structures supplied to aircraft manufacturers.

Avcorp’s roster of metal, bonded and composite aircraft components and structures includes:
• horizontal and vertical stabilizers – control surfaces on the aircraft tail, each of which has integrated systems, that provide stability to the aircraft;
• elevators – hinged surfaces that control the up-and-down direction of an aircraft;
• wing structure;
• fuel tanks;
• metal bonded products – interior components and fairing surfaces, wing panels, and wing skins.

Kevin Russell, vice president of marketing and programs for the manufacturer, comments on Avcorp’s singular position in the industry. “Our niche is that we have a complete design and manufacturing capability which includes the integration of systems. If you look at our competitors, most of them are larger organizations. So our uniqueness is that we’re a smaller company that has their capabilities. We think our competitive edge is that we have a good cost structure and that we’re much quicker to react to the customers’ requirements because we’re smaller and therefore more agile.”

Avcorp is projecting $60 million in 2003 revenues. The employee count is just under 400, with 300 in hands-on positions on the shop floor and the balance in support staff such as engineering, planning, logistics and finance. Avcorp’s custom-built 300,000-square-foot headquarters and plant was opened in 1997.

Manifest of Services
Avcorp’s customers are the original equipment manufacturers (OEMs) who produce aircraft. As a first-tier supplier, the corporation holds a solid position in its field. “Our business is the design and manufacture of aircraft structures, but certainly our core capability is the design and manufacture of flight control surfaces,” says Russell. “Our main business is in horizontal and vertical stabilizers. Avcorp has a lot of experience in those types of components and so we’re very competitive in that field.”

Russell names Bombardier, Boeing and Cessna as primary customers, accountable for 95 percent of Avcorp’s business. He also says that 60 percent of products are direct exports to aircraft manufacturers, but that 90 percent of the products eventually go to export markets through the OEMs.

Keeping pace with and supplying the aircraft OEM market requires deft scheduling capabilities. To meet that demand, Avcorp has looked internally to its own processes and procedures to create efficiencies and find economies. Describing two major undertakings in shop processes, Russell says, “We’re well down the path to lean manufacturing. Our facility is designed in product cells, and each cell has autonomy – so each manager has autonomy in the area. And, from a process point of view, we have done a lot of development of assembly automation. One example is that we use robots for drilling and countersinking of our assemblies.”

Controlling the shipment of raw materials and delivering the finished products are two more areas in which Avcorp has implemented changes. Citing one example, Russell says, “For Boeing, we have set up just-in-time daily deliveries. Our own truck makes daily delivery of both assemblies and kits directly to Boeing’s assembly lines in Seattle.”

Again looking to its own internal processes, Avcorp made changes in its supply procedures for materials used in manufacturing. Russell says, “Part of that change is direct delivery – just-in-time delivery made to us. So we are in the process of flowing down some of those lean manufacturing systems to our supply group. And we have some key suppliers who are working with us and have signed long-term agreements with our supply chain.”

Scheduled Takeoff
Revenues of $60 million for 2003 are close to the 2002 level, a stable sign after a two-year, industry-wide downturn in aircraft manufacturing. “The turnaround came for us because we have two new programs with Cessna just entering the production stage,” Russell says. “Now, based on just our organic already-existing contract base, Avcorp expects to have an over 20 percent increase in contracted growth in 2004. So, we see 2004 and 2005 being much better revenue years.”

When he addresses the subject of Avcorp’s continuing prospects, Russell also notes that, “Avcorp has completed significant financial restructuring steps that has strengthened the company’s balance sheet.”

Russell’s view of Avcorp’s future includes continued sales and profitability growth through generating new business and minimizing the costs of operations. “It would be fair to say that I am optimistic for the future,” he states.
For Avcorp, the potential is sky-high.