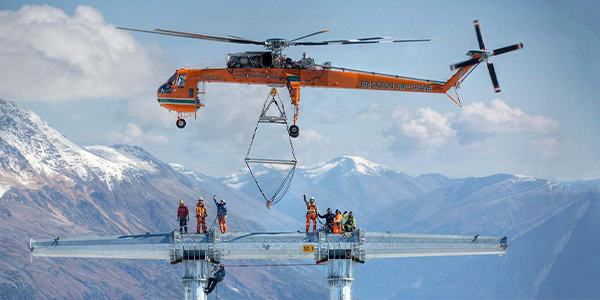 Igor Sikorsky, the legendary founder of Sikorsky Aircraft was adamant about the life-saving capabilities of his helicopters and he dreamed of making one that could perform large-scale emergency evacuations. That dream has been realized at Erickson Air-Crane Incorporated, based in Central Point, Ore.

“Emergency response represents part of the wide spectrum of our aircraft’s capabilities and we’re looking to expand awareness of our product within that market,” said Dennis Hubbard, Public Relations Manager for Erickson Air-Crane. “We have machines that can arrive at earthquake sites to rescue people, put out large fires, and use long lines to distribute supplies and equipment where earthbound vehicles cannot reach.”

Erickson’s S-64 Aircrane helicopters have been on the scene at the Mount Etna eruption in Sicily, carrying cement blocks to divert lava flow threatening a pristine forest and more recently above the raging Los Angeles fires. Worldwide, the governments of Australia, Canada, Mexico, Italy, South Korea, Greece, Brunei, France, and Italy are among Erickson Air-Crane’s clients.

Military history and more
“The unparalleled versatility of the S-64 matched with an intense pride and innovative spirit has allowed us to realize Igor Sikorsky’s dream for the helicopter,” said Hubbard, noting that Erickson began with one leased Sikorsky S-64E Skycrane. Conceived, designed and built by Igor Sikorsky, the Skycrane was designed to be the powerful and highly versatile “Flying Crane” of heavy-lift helicopters.

Also known as the Sikorsky CH-54A, the same helicopter was used in Vietnam to transport road construction equipment, armored vehicles, and retrieved more than 380 damaged aircraft involving savings estimated at $210 million. The helicopter also carried personnel with 90 combat equipped troops transported during what was believed to be the largest number of people carried by a helicopter at one time on April 29, 1965.

In 1971, Jack Erickson, then owner of Erickson Lumber Company, had a commercial application in mind when he visited Sikorsky Aircraft in Stratford, Conn. The Skycrane demonstrated the heavy load capacity and maneuverability to pioneer the first successful use of the helicopter in aerial timber harvesting. Erickson leased one for a year for that purpose, and by the end of that year, he returned to Sikorsky and leased three more.

The benefits of lumber harvest via helicopter are substantial. What takes bulldozers and other terrestrial means three months can be accomplished in a week, according to Hubbard, who said that the average turnaround time for an Air-Crane carrying roughly 12 tons of timber is three minutes. Erickson Air-Crane has harvested timber in many areas of the United States, Malaysia, Indonesia, and Canada.

In 1992, when no commercial customers had been developed and no strong support for the continuance of the program existed within the military, Sikorsky sold its S-64 Type Certificate to Erickson. “Erickson is keeping the S-64 program alive while generating a continuing stream of improvements to the aircraft, its components and its maintainability,” said Hubbard. “Today, the design genius of Igor Sikorsky and the nurturing by an Erickson organizational culture totally dedicated to the S-64 has produced a true heavy-lift helicopter of unparalleled versatility, ruggedness and reliability.”

Erickson Air-Crane routinely flies 2,250-2,500 hours per helicopter, per year on timber harvesting operations in the wilds of British Columbia, Canada and Malaysia. Erickson Air-Crane has operated the S-64 helicopter for over 30 years harvesting timber with up to 20,000-pound payloads at the end of a 275-foot long-line performing 20 to 30 cycles per hour. Each cycle transits from hover to full acceleration and deceleration in the vertical to hover.

Fire Suppression
Once Erickson owned the manufacturing rights to the S-64, the company revolutionized the aerial fire fighting industry with the unique and versatile Erickson S-64 Aircrane Helitanker. This aircraft features a 2,650-gallon tank. Unlike many fixed wing tankers, the tank doors are controlled by a microprocessor that actually adjusts for airspeed and opens the tank doors to allow for a flow rate that matches the particular coverage level selected by the pilot.

The computations and planning involved with fixed wing Airtanker drops can be expanded with the Helitanker’s wide variety of refill sources. From a base of operations, the Helitanker can fly directly to the fire and refill the tank in whichever source is closest nearby. A hydrodynamic ram scoop snorkel or “Sea Snorkel” fills the tank in sea water and fresh water as fast as 40 seconds. With a refill time of 40 seconds or less in water sources as shallow as 18 inches, the Helitanker can deliver up to 30,000 gallons per hour of water, foam mix, or retardant to the fire.

Said Hubbard, Erickson Air-Crane’s impressive resume of worldwide firefighting service led to contracts with the governments of Italy and Greece. Presently in Italy two Erickson S-64s are on a three-year contract for the Italian ministry of civil protection on a 365-day-per-year basis for fire suppression, disaster relief, and emergency response. As a result of the tremendous success of the Helitanker system in Italy, the Italian Forest Service (Corpo Forestale) has signed a multi-million dollar purchase agreement for four S-64 Aircrane Helitankers, which will be built at the Erickson facility in Central Point.

The Helitanker system has equally impressed other governments, such as South Korea which, in 2001, saw more than 180 fires flare and its woodland areas turn to tinderboxes during an unseasonably hot and dry spring. The majority of the fires were caused by controlled burning of dry fields, rice paddies, and agricultural waste. The Korea Forest Service contracted a single Helitanker for suppression services, which impressed officials to the extent that they eventually purchased a Helitanker for their own use. Meanwhile in Australia, The Department of Natural Resources and Environment of Victoria has contracted Helitanker services during every fire season since 1998.

It was 1998 when Erickson Air-Crane achieved certification for the first constant stream spray nozzle attachment for the Helitanker, said Hubbard. The “water cannon” attaches to the tank and forces a stream of water or foam mix at 300 gallons per minute with a coverage range of 160 feet. The water cannon was developed to fight high-rise structure fires in congested inner city areas at altitudes too high for effective use of ground-based hose delivery systems. However, the key benefit of the water cannon lies in the ability to direct a constant stream of water of foam mix into any area that may be inaccessible to other types of equipment.

So far this year in the United States, Erickson flew six Helitankers dropping over seven million gallons on major wild land fire events across the Southwest region including Colorado, Arizona, New Mexico, and California, most recently in the devastated regions of Los Angeles.

“With the ferocious and erratic winds whipping through these (urban interface) neighborhoods, the firefighters are battling incredibly fast-moving fires,” said Paul Mavrinac, Chief Pilot, Erickson Air-Crane. “The Helitanker provides the protection and support through its ability to surgically deliver large amounts of water, low and tight into neighborhoods at reduced visibility. We are the heavy support for the guys on the ground.”