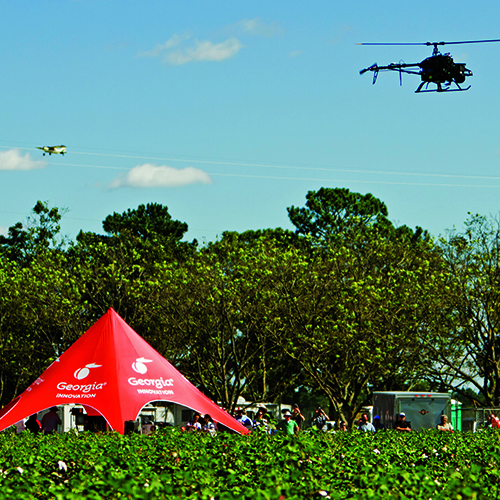 The state of Georgia can definitively be counted as one of these, as a major hub for a number of different industries that play significant roles in driving local, national, and global economic success. “The state of Georgia has emerged as a powerhouse in not just the southern region of the United States, but on a national and global level as well, strategically driving innovation in everything from aerospace and agriculture, to information technology, manufacturing, and logistics, bringing economic prosperity to the state and its wide range of businesses” says David Nuckolls, Global Account Manager of Marketing and Operations for the Georgia Department of Economic Development’s Centers of Innovation.

Expanse of Industry
Let’s look at some numbers first. Agribusiness, a market devoted to the production, processing, and distribution of food, is the state’s largest industry, accounting for nearly $73 billion in annual revenue. And while this may not exactly be too surprising—after all, the “Peach State” is one of the more well known state nicknames around the country—the scope of produce grown and harvested across Georgia expands far beyond a few staple fruits and vegetables; an impact reflected in the fact that the industry serves as either the number one or two employer in two-thirds of the state’s counties.

“I think we surprise a lot of people when looking at the many different types of food products we grow and offer here,” Nuckolls says. Apart from being number one in the production of poultry products and blueberries, Georgia’s farms are populated by a diverse set of crops ranging from cotton, pecans, and peanuts, to pomegranates, satsuma oranges, garlic, olives and stevia.

Then there’s also the state’s aerospace sector, a $51 billion industry that is responsible for the employment of more than 88,000 Georgians, nearly 10,000 of which are at work under the roofs of Delta TechOps’ 2.7 million-square-foot facility in Atlanta, the largest MRO shop in the country. With the presence of companies like Delta, Boeing, and Gulfstream amongst more than 500 other aerospace companies around the state, exports for the industry topped $7.8 billion in 2013, making aerospace products the number one export of the state.

Strategic Solutions
The success Georgia has been able to achieve in agribusiness, aerospace, and beyond is by no means to due to luck or chance, but rather is the product of a statewide commitment to developing an interconnected, intelligent local economy based upon the sharing of ideas and resources in order to better benefit those doing business within the state. “No matter the industry here in Georgia, we are always trying to do whatever we can to research and develop synergies between our markets to make them as competitive as possible.”

A central piece in this endeavor is the state’s six Centers of Innovation that in their latest fiscal year provided more than 1,600 businesses operating in Georgia with technical industry expertise, collaborative research, and partnerships for growth. The Centers of Innovation, a division of the state’s Department of Economic Development, cover aerospace, agribusiness, energy technology, information technology, logistics, and manufacturing, and are led by industry experts and researchers who work together with companies around the state to develop new opportunities and market connections that otherwise wouldn’t be possible.

For example, Nuckolls says some of the more popular research going on between their aerospace and agribusiness centers right now is the commercialization of drone technology and its potential role in agriculture. “I recently attended the Sunbelt Agriculture Expo in Moultrie, one of the largest farm shows in the Southeast,” he says, adding, “But I went there on behalf of my aerospace center, to discuss drone technology with business owners and whether or not the presence of such could benefit their operations in a significant way.”

It’s about creating opportunity where possible, and using it to strengthen both the companies’ and state’s overall future success. “These centers are great resources for industrial progress, because whether it’s a company bringing a potential solution to us, or vice versa, the public and private collaboration that emerges out of it is something that benefits everyone.”

Driving Success
Nuckolls thinks back to 2009 when they set up a logistics event designed to bring together logistics companies, truck drivers, rail operators, workers from the Port of Savannah, and related software engineers from around the state to more effectively discuss how they could better work off of each other to increase their overall efficiency. “We initially figured we would set up a luncheon where they could sit and talk with each other face to face, and while 200 people signed up for it, a total of 400 showed up.”

Fast forward to 2015, it’s clear they struck a strong chord, as the event has transformed into the Georgia Logistics Summit which this year attracted 2,000 individuals from over 30 states and 15 countries and has in the past featured keynote speakers from Home Depot, Wal-Mart, and Carter’s—all of whom enjoy heavy operational presences within the state.

“We work with companies of all sizes, from assisting small farmers in making the most out of their harvest yields and excess crop, to working with global manufacturing leaders like Yamaha to swiftly fix an issue within the material chemistry of their products that would ultimately enhance the performance of their product,” Nuckolls says.

The Centers of Innovation are a state-sponsored resource for all businesses in the state of Georgia to utilize, and represents the state’s long-term commitment to independent economic success. In fact, when you think about just how valuable of a resource that they represent, and then consider the infrastructure that has been established across the state, which includes the nation’s 4th largest port in the Port of Savannah and 4 major interstate highways, along with Governor Nathan Deal’s abolition of the state sales tax on energy in manufacturing in 2012, it becomes quite clear why Georgia stands above the rest as perhaps the best place to business in the United States.