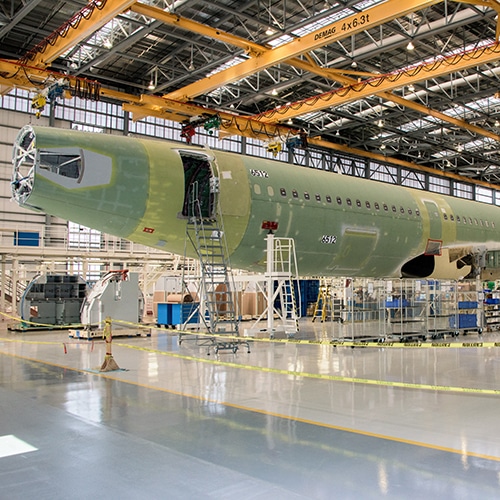 In 2012, Airbus made an announcement that sent waves through the global aviation market. The multinational company, whose manufacturing presence already stretched across locations in France, Germany, Spain, and China, decided it would build and operate its first major production facility within the United States. Choosing the versatile city of Mobile, Ala. (more on that later), the decision communicated to many that Airbus, while already a well-established leader in the international market, was ready to elevate its position in what is the world’s largest and perhaps, most competitive market.

Three years later, in an opening ceremony that featured a diverse crowd of business leaders, politicians, international diplomats, and newly trained employees in attendance, senior executives for Airbus cut the ribbon and in doing so, effectively launched Airbus’ full-time “citizenship” in the United States.

“Construction of a strategic site like this in the United States is a big step forward for Airbus,” says Dr. Ulrich Weber, Airbus’ U.S. Vice President and General Manager of Final Assembly Line. Weber, who’s been with Airbus for 25 years now and previously headed up the company’s Hamburg site, says that the Mobile location distinguished itself as the best option for them on a number of different levels.

The Mobile Advantage
“We’re going to be manufacturing a highly-engineered, innovative series of aircraft here in the A320 family, and Mobile stood out as the perfect place to carry out such an operation,” Weber says. First, he points to the deep-water Port of Mobile, whose structural depth and close proximity to the facility allow for a high degree of logistical efficiency with respect to Airbus’ ability to smoothly ship and transport components coming in from Europe to the plant.

Next is the actual airfield—Mobile’s Brookley Aeroplex—in which the 116-acre plant sits upon. Weber says because there is little commercial traffic crossing through the two runways running through the facility, not only are they uninhibited in their operations and testing on the ground, but the available airspace above provides them with flexible options when it comes time to take to the skies as well.

Finally, and perhaps most importantly in Weber’s mind, is the manufacturing workforce in the surrounding area that Airbus has been to hire from and train over the last year and a half. “Recruitment began in early 2014, and although we laid out strict application requirements (five or more years of aviation experience needed), we had no problem quickly filling the positions,” he says adding, “Which speaks strongly to our expectation of easily growing that number in the long term.”

He says most employees, 30 percent of whom are military veterans, traveled to Germany to participate in training initiatives at the company’s facility in Hamburg, and while it was necessary for them to undergo an education of corporate guidelines and operational specifics, the inherent skill and experience displayed by them impressed many of their German counterparts. “More than 80 percent of our employees are from the Gulf Coast region, and while our employees are largely local to the area, we consider them to be a world-class workforce.”

Building on a Legacy
Airbus will be manufacturing the A320 family (A319, A320, A321) of aircraft at its Mobile manufacturing facility, the world’s best-selling single-aisle aircraft series. In fact, the expanded introduction of them into the U.S. market is expected to increase the company’s share of the domestic market from its current position of 20 percent, to as high as 50 percent. “We expect most production to be tied to the A321 model, and have already begun production on three aircraft so far.”

And while only a quarter of the plant is occupied as now—as expected—Weber says that with their latest market forecast predicting demand for some 4,700 single-aisle aircraft in North America over the next 20 years, he expects Mobile’s annual production to reach somewhere between 45 and 50 of such aircraft by 2018. It’s perfect timing for the company, because coinciding with this demand is Airbus’ planned integration of their A320neo (new engine option) into their Mobile facility in 2017.

The A320neo represents the latest of many product upgrades that comes from the $340-
plus million Airbus invests annually into innovating the A320 family. The NEO incorporates many cutting-edge components, including latest generation engine choices—PurePower PW 1100G-JM from Pratt & Whitney and CFM International’s LEAP-1A—and large Sharklet wing-tip devices, which together deliver 15 percent fuel savings upon service entry. By 2020, the NEO will deliver a 20 percent fuel burn improvement per seat and an additional flight distance of 500 nautical miles, which translates to the ability to carry two tons more per payload at a given range. Additionally, the A320neo will provide a double-digit reduction in NOx emissions and reduced engine noise.

Making the implementation of this technology that much easier into the Mobile facility, which currently only manufactures the A320ceo (current engine option), is the fact that A320neo versions will have over 95 percent airframe commonality with the A320ceo versions, allowing it fit seamlessly into existing A320 Family fleet. “The homogeny between the two will allow us to easily phase out the CEO and switch over the NEO in 2017, ” says Weber.

Everybody Wins
Weber says that the overall adaptability afforded by the Mobile facility makes it unique from the rest of Airbus’ facilities around the world, as the logistics and workforce not only allow for the highest degree of operational efficiency, but the ability to be dynamic in what or how they’re manufacturing.

It’s this capability that makes Airbus’ commitment to the U.S., and Mobile, Ala. specifically, so valuable. Consider the long-term presence of a company of its magnitude in a city like Mobile, whose population is just under 200,000, and it will undoubtedly lead to a trickle down effect to the rest of the surrounding community and economy. Weber says that a number of suppliers have already planned expansions and investments into their businesses in response to the growth they’ve achieved from their partnership with Airbus, and with that comes a number of new jobs and opportunities for the area to continue to build off of.

Airbus’ manufacturing facility in Mobile may be “new territory” in both a literal and figurative manner for them, but as one of the world’s most innovative, impactful, and influential aviation companies, its presence in the United States and the ensuing positive effect it will have on the local and national economy is something everyone should be excited about.