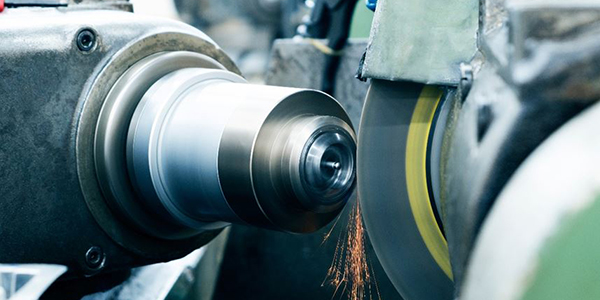 Having the distinction of introducing the first computer numerically controlled (CNC) grinding machine, employees at Bryant Grinder Corporation continue as frontiersmen in the manufacture of grinding machines and systems.

“What we do is behind-the-scenes to most people’s daily lives,” says Dick Crossman, president and general manager, about the $40 million company. “We make the machines that make the parts for their cars or their home appliances. Every day people come into contact with the results of our business, they generally just don’t know it.”

“Reliability is key in today’s marketplace. Manufacturers need to know that they’re building product with parts that are 100 percent reliable. To do that, they need the support of good manufacturing equipment. And that’s exactly where we fit into the market.”

Computer control enables statistical process control and can constantly monitor quality data. “Computers and automatic gauging can capture data about each part that is ground,” Crossman says. This becomes essential to manufacturers such as auto makers who are intent on “zero defect parts.”

The Manufacturer’s First Line of Support

To provide unbeatable support, Bryant Grinder continually upgrades computer controls, taking advantage of every millisecond of improvement to devise systems that monitor a host of complex variables. Consider one “simple” variable for example: grinding speed. It’s not simply a speed in revolutions per minute. The more important consideration is the surface speed at which the wheel contacts the work part. This speed is constantly changing as the wheel wears and becomes smaller. The computer must keep track of the wheel size and modify the revolutions per minute to maintain surface speed. “Part of controlling a precision grind is monitoring how much power is being used to grind the surface,” Crossman explains. “The power being used translates into the amount of force being applied between the grinding wheel and work. Controlling the force determines how fast metal is removed, and also how smooth or coarse the surface finish will be and how good the geometry produced will be. One way to monitor force is using the computer to analyze the amount of electrical current being used to turn the grinding wheel. It makes decisions to control the machine based on this information. The faster it can react and make changes to the grinding cycle, the better the machine grinds.”

Such accuracy comes in handy in the manufacture of, for example, fuel injector parts for cars, which need to be accurate within millionths of an inch. Crossman advises, “The better the accuracy, the better the engine performance for both fuel economy and pollution control.”

In the area of fuel injection, Bryant Grinder recently has introduced a hydrostatic bearing workhead which eliminates the rollers or balls common in traditional bearings. In a hydrostatic system the rotating element is supported on a cushion of oil. In traditional bearings the mechanical contact between rolling elements and tracks dictates how good the bearing is. “No matter how good the mechanical bearing system is, there is always some slight imperfection,” Crossman says.

Because there is no metal-to-metal contact in the hydrostatic system, the major cause of imperfect rotation is eliminated. “By taking out the mechanical bearings, you can rotate a part on our machine very precisely, with less than 2 millionths of an inch deviation from ‘perfect.’ The work part we generate from that becomes the best any current process can produce,” Crossman explains.

Set to be formally introduced in September at the International Machine Tool Show 2000 in Chicago, the new hydrostatic workhead system has received a “tremendous” initial response, according to Crossman. In fact, one of the world’s largest fuel injection manufacturers, with plants around the globe, has ordered retrofits on its machines to install the new package.

“Continuous upgrading is our market strength,” Crossman says, “and our customers expect to see results.” He adds that Bryant Grinder always performs a “test grind” before shipping the machine to a customer. It’s a particularly demanding undertaking because the company is generally performing the test on its client’s parts, sometimes valued at $25,000 or more. “Grinding is typically the last operation on a work part,” according to Crossman. “At that point mistakes can be very expensive. You really must know precisely what you’re doing.”

It seems Bryant Grinder has always been out on the forefront of technology, occasionally perhaps a little too far. The way in which the company, founded in 1909, became a leader in its field is another story of American creativity.

“Bryant talked to the major auto manufacturers, who marveled at the concept but wouldn’t go for it. It was just too complicated for their shop workers,” Crossman remarked. “So he had to retrench. His design had quite a number of innovative concepts in it, so he turned it back into a one-operation machine and relaunched the product to an enthusiastic market. When the early export boom occurred he had that simplified version of the machine perfected and was able to move rapidly into the European market.” In the post-war 1920s and 1930s products like Bryant’s were being improved and expanded. During this time, Bryant ensured success for his new company by entrenching himself in what would prove to be his best customer base: the automotive, aircraft and bearing industries. During the Great Depression, Bryant was able to sell a substantial volume to the Soviets as part of their Five-Year Plan for industrialization of the Soviet Union. During this time, Bryant also developed the motorized wheel spindle.

In the 1940s the plant enlarged to more than six times its original size with round-the-clock operation. The Korean War created a great demand for grinding machines. In 1958 Bryant merged with and became a subsidiary of the Ex-Cell-O Corporation of Detroit. Business boomed again in the 1960s when Bryant was awarded the president’s “E” Award for export. Technical acclaim came again in 1979 when the company unveiled its new LECTRALINE LL3 machine, the world’s first CNC multi-surface grinder. “In creating the first CNC grinding machine in 1979, we re-introduced (Bryant’s) original concept” which was multiple operations in one machine. In 1979, it was the right product at the right time.

“With the use of computer controls a machine for grinding multiple surfaces was no longer a ‘mechanical monster’ to put together,” Crossman says. “Technological leadership ultimately brought us full circle with a continued focus on grinding.”

The late 1980s saw the introduction of the Bryant LECTRAFORM CNC OD form grinder line. Then Textron, Inc., purchased Ex-Cell-O in 1986 and two years later, Goldman Financial Group bought the company. In 1993 the company again broke new ground with the introduction of ULTRA-series machines, the world’s first computer-controlled grinders optimized for high volume production grinding. Presently, the company continues to service and be in tune with world markets, providing products to such giants as DaimlerChrysler, General Motors, SKF and Dana Corporation.

The company, adds Crossman, has been consistently dedicated to quality and service since its founding. “Our position has always been as a partner with our customers, working with them to solve their grinding problems using the best tools available at the leading edge of technology.”