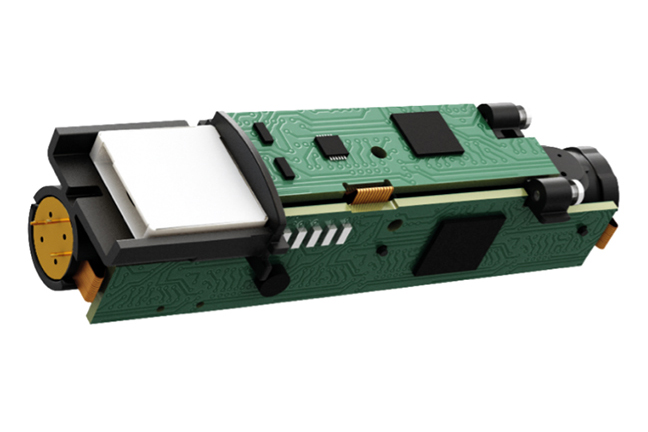 During the Global Industrie exhibition, which will be held from May 17th to 20th in Paris Nord Villepinte, Olythe, a specialist in breath measurement, will unveil its new miniaturized and ultra-precise sensor capable of measuring volatile organic compounds (VOC) by infrared spectrometry of several gases. This patented technology offers a reliable, accurate and fast measurements and is a major development in the field of gas sensors. Olythe keeps pushing the limits! After its powerful e-breathalyzer OCIGO, OCIengine opens Olythe to entirely new sectors of the industry.

OCIEngine, a revolution in the French know-how

Known worldwide for its e-breathalyzer made in France OCIGO, Olythe takes one step further to disrupt all industries by positioning itself as a specialist in the measurement of exhaled air and ambient air by infrared spectrometry by developing OCIEngine. After years of research and development, it is one of the most accurate NDIR gas sensors for its miniaturized size, measuring volatile organic compounds (VOCs) in exhaled air and ambient air. VOCs are one of the major families of gases and gaseous substances, many of which are considered pollutants, toxic or carcinogenic. Their volatile nature allows them to spread very easily in the atmosphere, hence the need to detect and measure them to better protect ourselves.

OCIEngine consists of a measuring chamber through which infrared radiation passes. When air passes through this chamber, the molecules of interest absorb part of the radiation, which reduces the intensity of the optical signal. The concentration of the gas can therefore be calculated according to the physical Beer-Lambert law.

The fluctuation of the infrared radiation emitted in contact with the molecules avoids any transformation or deterioration of the sensor and its components that could alter its operation. This ensures an unequalled life span. It is considered the most reliable and accurate sensor of all gas technologies available on the market today and is capable of measuring gases other than ethanol.

If the OCIEngine sensor, deployed in OEM (Original Equipment Manufacturer), was already used by companies in the field of health (blood alcohol, level of certain pathologies), its new version goes further and allows the technology to open up to other application fields. Indeed, companies in the field of security (measurement of CO2 in the ambient air), of the industry (monitoring of the concentrations of certain gases in the food industry, etc.) also wish to integrate it in their devices. Whether in ambient air, exhaled air, inhabited areas, greenhouses, or incubators, it is important to monitor CO2 levels and surrounding gases. In this sense, Olythe also meets the needs of custom sensor integration.

About the Global Industrie trade show
Born from the merger of four exhibitions (Midest, Smart Industries, Industrie and Tolexpo) in 2018 in Paris. Global Industrie has been a great success since its inception and has established itself as one of the major exhibitions dedicated to industry in the world. Focusing on both the industry of the future and international business, it is held in even-numbered years in Paris and in odd-numbered years in Lyon: a geographical alternation that enriches both its offering and its visitor base. Thanks to the support of the country’s highest political and institutional authorities, in addition to its comprehensive and international offering, Global Industrie is a major world event, the standard-bearer for European and French industry, resolutely oriented towards the future.

About Olythe
Olythe is a specialist in spectroscopic breath measurement of alcohol in exhaled air thanks to its patented technology. Olythe designs, develops, and markets a complete range of connected devices in order to meet the needs of professionals (Transport and Logistics, high-risk professions, administrations and law enforcement, healthcare professionals) as well as private individuals. Entirely Made in France, the technology is FCC and FDA-approved. It has also received DOT approval1 to equip US law enforcement Olythe is based in Aix-en-Provence, France.

1 The DOT approval letter is provided on demand