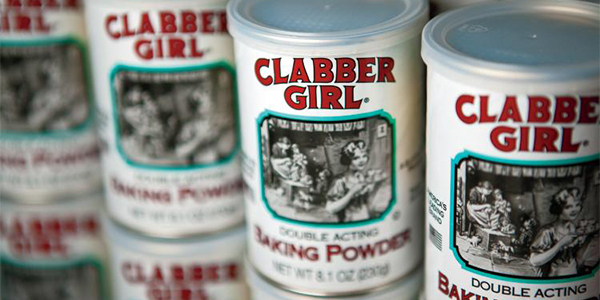 If you’ve ever driven the back roads of the American Midwest, you can still see some of the old painted barn signs for Clabber Girl, featuring the fresh-faced, biscuit-bearing young girl whose smiling image made the company’s baking powder the number one product in its category for much of the 20th century.

The name recognition and good will from those marketing campaigns of the 1920s and 1930s is still paying dividends today. After a long era of standing relatively pat, the Indiana-based Clabber Girl is now leveraging its popularity on supermarket shelves and with big-name retailers such as Wal-Mart to launch a new era of growth in the 21st century. A new line of Clabber Girl cornstarch is now one of America’s two most popular, and the firm is already making moves into the competitive all-purpose baking mix market.

Ironically, this new era of growth at Clabber Girl, including the first expansion of its main facility in Terre Haute, Ind., in decades, comes at a time when Americans are much less likely to cook

at home and bake from scratch than in the early and mid-1900s, when the brand name grew. That’s why the company has become so aggressive in both finding new markets and increasing market share.

“We recognize that the baking powder market for home baking has shrunk and is a lot smaller than it used to be,” explained Tom Payne, a marketing manager for the family-owned Clabber Girl. “So we’ve had to grow more aggressive, to get more market share, and we have tried to extend the brand beyond baking powder and into the larger category of baking and cooking.”

That means that in addition to its industry-leading baking powder and now cornstarch, Payne said that Clabber Girl has either recently introduced or is hoping to soon market new lines of baking mixes and baking ingredients. The company is already test-marketing and plans to soon broadly introduce its multi-purpose baking mix.

But the Hulman family, local legends in Indiana who have owned the company for more than 157 years, has never been one to shy away from a challenge. Francis and Herman Hulman were German immigrants in the mid-19th century who settled in Terre Haute, considered a western trading post at the time, and opened a wholesale mercantile and grocery business in 1849.The Hulmans were general wholesalers, offering everything from coffee to gardening equipment, but when the invention of premixed baking powder revolutionized home cooking in the 1870s, the Indiana merchants soon got caught up in the fray. These new baking powders were sold regionally and marketed aggressively.

In 1899, the Hulmans introduced the Clabber Girl brand; the name came from the 19th-century custom of using sour milk, or clabber, to fashion a homemade baking powder, and so the Clabber Girl image was meant to entice old-time bakers to the new product.

The rise of Clabber Girl to the number one market position through its iconic model, a drawing of a real youth from Terre Haute, and its aggressive use of roadside advertising paved the way for a century of prosperity. The company expanded horizontally over the years, adding other well-known prominent brands of baking powder such as Davis and Rumford, which had been the first national brand in the 1870s.

The Hulman family also took a fascinating detour, almost literally. Like many people from Indiana, the Hulmans got caught up in the excitement of the Indianapolis 500 during the early 20th century, and in 1945, when the famed brick race yard was experiencing some financial troubles, Anton Hulman Jr. bought the Indianapolis Motor Speedway in 1945. Not only has the track flourished for the Hulman family, but the enterprise has grown into the Indy Racing League, a large sporting enterprise with events from coast-to-coast.

As you might expect, the Hulmans have been able to create some synergy between their two companies. Clabber Girl has used racing league events across the country to promote its baking products, and the two companies even share the same executive chef. Payne said that Clabber Girl has been able to use the Indianapolis 500 and other racing league events to entertain its growing list of clients.

Today, Clabber Girl is owned by the fifth generation of the Hulman family, and it employs roughly more than 140 people, and that number is expected to grow. Last September, the company announced that it will expand its operations with an approximately 70,000-square-foot building addition that is expected to create 42 new jobs over the next four years. The new facility will keep Clabber Girl at its longtime location in downtown Terre Haute.

One thing that the expanded plant will help facilitate will be an emphasis on peanut-free products, a response to families where a member has a potentially deadly peanut allergy. Company officials say they learned of the severity of the peanut allergy problem through Delisheries, a fundraising division dedicated to producing mixes for brownies, cookies, and other sweets for not-for-profit organizations to use in their fundraising events.

“Peanut allergies affect more than just the allergy sufferer – it affects the whole family, even friends, school and community,” Payne noted, adding that Clabber Girl‘s plant was declared 100 percent free of the allergy-causing peanut protein in 2005. “People can turn to our products to be sure that they’re safe.”

In the meantime, officials at Clabber Girl have also tried to stay on top of other trends in the food industry. Although people are baking at home less often, they are also eating more baked goods, either prepared at the supermarket or baked in restaurants. As a result, Clabber Girl has successfully stepped up its food industry sales, shipping out more 50-pound bags of baking powder.

Payne noted that even the food service industry is switching over more to convenience foods, because of a lack of skilled labor. “We’re actively selling and competing, because that part of our business is growing,” he said.

When Clabber Girl entered the cornstarch market, it quickly grew its share of the market to more than 10 percent in just four short years, a feat that it hopes to duplicate with its multi-purpose

baking mix that it introduced at roughly 1,500 American grocery stores in a test-run last March. One thing that should aid Clabber Girl’s expansion is its skill in the areas of packaging and marketing. Most recently, it rolled out its new baking mix in unique, resealable plastic tubs.

Ironically, it’s the willingness to try new things that has kept an iconic brand of the 20th century thriving.

“Someone once described us as a 150-year-old start-up company, and for us the sky’s the limit,” Payne said. “We want to be here for another 150 years, so we have to make sure the brand is strong and growing.”