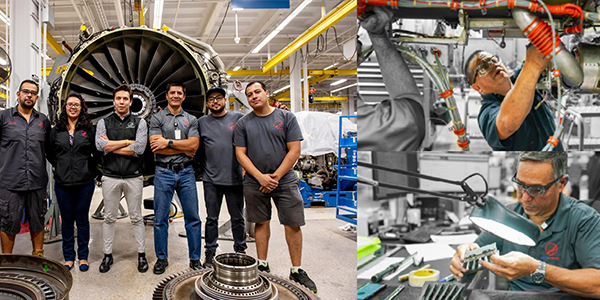 Known for its mastery of overhauling the Pratt & Whitney JT8D family of engines, AeroThrust is calibrating its business plan for today’s climate.

“For some time now the events of 9/11 have created difficulties to the aerospace industry. Two particularly significant hurdles for the repair, maintenance, and overhaul side of the industry are a surplus of engines on the market, and customers who are inevitably experiencing some financial difficulties,” explains President Faryt Kalhil. “So a key AeroThrust element has become minimizing the cost of our service to the customer while maximizing value to them.”

AeroThrust’s flexibility and creativity extend to buying engines and surplus inventory in the market and tearing them down for component parts to lower repair costs for 727, 737, DC-9 and MD-80 aircraft engines.

Founded in 1967 and recently acquired by American parent Windstar Capital, privately owned AeroThrust has an established reputation as a premier engine maintenance facility.

“A lot of customers will buy an engine and send it to AeroThrust just to get the engine certified,” Kalhil says. “The AeroThrust tag means quality for our customers all over the world.” That quality translates into safety and reliability on the flying field for AeroThrust customers.

In addition to domestic customers, the company services customer engines from Europe, Central and South America, the Caribbean, and the Far East. Its location at Miami International Airport, a major international port, puts AeroThrust at the gateway to the world, providing easy access for customers including airlines, cargo operators, leasing companies, brokerage firms, and a number of smaller startup air industry firms.

Its business stands strong even as the industry becomes more fractured and competitive.

“What is happening is that as the big operators reduce the size of their fleets, it’s less viable for them to do their own maintenance,” Kalhil observes. “It makes more sense to outsource the repair and maintenance to those who specialize, and can provide at more competitive costs the same quality and traceability as was available in house. This allows an operator to retain customer confidence through the knowledge that there are no quality compromises in an area of such high importance.”

Perpetual Motion Machine
Next time you fly to Miami, look for AeroThrust’s shop in the historic Pan Am building. Its 115,000-square-foot facility is abuzz with about 200 professionals whose capabilities include machining, plating, cleaning, welding, plasma-spray, NDT inspections, chemical and metallurgical analysis, and calibration. Two test cells in the airport and a nearby warehouse support the facility.

AeroThrust is always adding improvements and upgrades. “If you haven’t been here in the last six months, you haven’t seen the shop,” Kalhil says. “We’re constantly looking at how to position ourselves to satisfy our customers and exceed their expectations long term.”

With that approach, it’s no surprise that this small company is doing things that only big companies usually attempt, such as Lean Manufacturing and Six Sigma.

Few companies can do what AeroThrust does. It has been able to launch Lean and Six Sigma efforts, even during times in which many major companies are fighting for survival. Through Lean and Six Sigma efforts, AeroThrust is gaining tremendous competitive advantages that separate it from the pack. The company has established unmatched Turn Around Times (TAT) and unsurpassed value-to-cost ratios. All these improvement processes have been designed to begin with the voice of the customer and this is what truly sets the company apart. AeroThrust is a lean, customer service machine – 24/7, 365 days a year.

The company also has two internal designated engineering representatives (DERs) as an in-house extension of the FAA to make sure it can accomplish new repairs in a cost-effective and innovative manner, while improving the design and structure of the components.

“Every time an Airworthiness Directive is released, it requires training and devising organizational processes to establish new tools, procedures, and new systems that accomplish the directive in the best way possible,” Kalhil says.

“It’s very rigorously controlled and we have put in place very elaborate systems that allow us to automate tracking of ADs, service bulletins, and other safety sensitive requirements,” he says. AeroThrust has been able to capitalize on the many advantages of being a small, independent company while reaping the benefits of being the largest privately
owned independent maintenance provider in the U.S.

Techs, Mechs
“What makes all of it happen is our people,” stresses Kalhil, a former rework mechanic who worked his way up to the cockpit. AeroThrust technicians, mechanics, and inspectors have an average tenure of more than 10 years; the company has several employees with more than 30 and 40 years of service. “These are the people who make it happen because they have such extensive experience and such varied abilities that they really do a magnificent job for the customers and the safety of aviation in general,” he says.

Beyond the human factor, another AeroThrust advantage is its own plating facility to ensure compliance with the manufacturer and environmental regulators. The company is approved and certified by Pratt & Whitney to nickel cadmium plate critical components such as disks, hubs, and shafts. It works with state-of-the-art metals – titanium and other alloys – and plating metals such as nickel, chromium, nickel cadmium, silver and copper.

“You lose a lot of control by outsourcing plating. It’s a very sensitive process and any little detail, whether it’s tank temperature or solution strength, could be a significant factor in getting the right results,” Kalhil says. “AeroThrust looks to position itself as the company that doesn’t just perform good quality. We perform outstanding quality because this is a field where good is just not good enough.” AeroThrust customers recognize this and appreciate the unyielding quality the company provides.

Flight Plan
Among its many innovative directions, AeroThrust has approvals from the FAA to perform overhauls and repairs on components other than the Pratt & Whitney JT8D engines, adding product lines such as the CFM-56.

Training also is a marketable skill. The AeroThrust University is a dynamic training program for employees, soon to be offered to customers. “In today’s environment, operators are trying to reduce cost and overhead, especially in areas where they don’t have a competitive advantage. Rather than focusing on training, it would be better for them to let us do the training and let them concentrate on flying,” Kalhil explains.

Perhaps most interesting is the company’s new positioning as an engine provider. This concept is especially needed in the industry because customers must operate while their engines are being serviced, requiring immediate, airworthy replacement engines that meet specific configurations and certifications.

“In today’s marketplace, the new AeroThrust is more than just a repair and maintenance facility,” Kalhil reiterates. “AeroThrust has large levels of inventory, including access to engines for trade, sales and lease. We want to be the ‘Dell’ of the aviation industry, the ones that can build an engine to a customers’ specifications while providing them with a serviceable engine on wing in an unprecedented “zero turn time” to keep them in the air. This ultimately creates a positive impact on our customer’s bottom line.”

AeroThrust is rapidly becoming the global “one-stop shop” for all engine needs. The company will be represented at Aviation Week’s upcoming MRO Conference and Exhibition, April 15 – 17, at the Broward Convention Center in Ft. Lauderdale, Fla.

“I invite all aviation industry professionals to come by and see who we are today I guarantee they won’t be disappointed,”
says Kalhil.