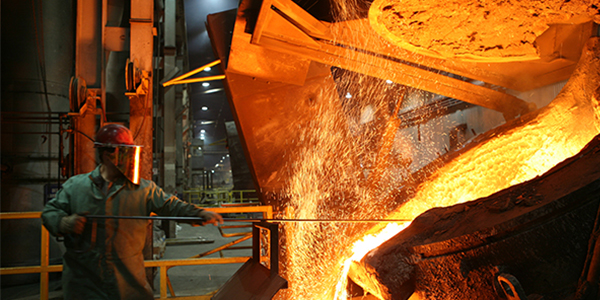 Superior Graphite was founded in 1917 as a supplier of flake graphite for manufacturers of steel and weaponry during World War I. By the mid-1960s, the company moved away from traditional mining and processing of natural graphite toward synthesis and purification of carbon and graphites.

In 1977, after six years of research and development, Superior Graphite earned a patent on a process that exposes petroleum coke to temperatures approaching 2,500 degrees Celsius to remove and convert carbon into graphite. The result is Desulco (desulfurized coke), their flagship product with a reputation for its nearly pure carbon levels.

Superior Graphite manufactures ARK electrodes in diameters from 8 inches (200mm) to 14 inches (350mm), matching the needs of small to mid-sized furnaces. ARK electrodes are manufactured in the company’s unique in-line graphitizing furnaces in Russellville, Arkansas. During the manufacturing process, the electrode is exposed from tip to tip to a graphitizing temperature of approx. 3,000 degrees Celsius. This produces electrodes of uniform high quality that include joining systems encompassing all international standards. As a result, a wide range of customers enjoy reduced power and production costs.

Superior Graphite’s expertise has also lead them to produce advanced grade graphites exclusively engineered and manufactured for the battery industry—lithium, alkaline and fuel cell. Graphite-based products also offer excellent lubrication and resistance to rust, corrosion, chemicals and solvents for this industry. The company’s film graphite lubricants, made in one of their three Chicago plants, are used in construction and agriculture and a wide range of other applications. The lubricants can be certified for use in baking food products or used in silicon carbide and composites. They are also used in forging, mold casting and extrusion in steel, and cooper and aluminum industries where the
lubricants extend die and mold life to increase productivity.

Kudos Abound
Superior Graphite calls on its knowledge, foresight and technology to improve upon one of the oldest naturally occurring minerals known to man. Graphite was used for writing in ancient Egypt. Its name comes from the Greek graphein, meaning to write or draw.

Graphite can be produced synthetically by exposing various carbon sources to extreme heat yet it remains stable without melting or burning. Scientists and engineers invented ways to thermally remove gases and other impurities and to pulverize it to change particle size. Superior Graphite Co. has used pulverization and its patented furnace technique to become one of the world’s leading suppliers of graphite and carbon products.

Today, the company earns industry-wide recognition and accolades from customers. Superior Graphite is an important member of the Saturn Corporation family of suppliers and was recently honored with Saturn’s Supplier Outstanding Quality Achievement award. The carmaker’s stringent quality criteria include zero parts per million defects, on-time delivery and no recalls. No sweat for Desulco, the 99.9 percent carbon product used by Saturn.

Superior Graphite also received top industry honors and recognition from Industry Week and the National Association of Manufacturers (NAM) for workforce excellence in 2001. Their Chicago (Plant 4) Battery Team manufacturing unit developed a new graphite that extends alkaline battery life by nearly one third. “The team perfected a unique production method for a new product that revolutionizes the alkaline battery industry,” says Superior Graphite President Edward Carney. “Thanks to the members and the work of many other people, Superior Graphite has attained worldwide recognition.” In addition to team production members, Carney paid tribute to other divisions that develop and market battery-grade graphite, including R&D, production and engineering, materials management and purchasing, accounting and order entry, and sales and service. But the recognition doesn’t stop there. Industry Week selected Superior Graphite’s Arkansas plant as one of the top ten manufacturing plants in the U.S. in 2001.

Core Products and Processes
Other innovative products from Superior Graphite include non-graphite Beta Silicon Carbide used to produce components such as mechanical seals and rings where prevention of leakage is crucial. The company’s technical labs are always developing new products. On the horizon is a high-grade graphite blend along with a pre-combined silicon carbide product for foundries.
In addition to supplying quality graphites and carbons, Superior Graphite also patents and licenses its processes to parts manufacturers. Electroconsolidation™ is a proprietary Superior Graphite Co. technology that uses heat and pressure to increase the density of parts made from ceramic, metal and polymer powders. The unique process involves surrounding porous parts with graphitic carbon grain and simultaneously applying intense pressure and heat. The process is less expensive than alternatives and offers rapid cycle times and easy automation while operating at a variety of heat and pressure application rates.

As the name suggests, their ThermoPURE™ graphite and carbon products are thermally purified—processed in the company’s proprietary furnaces. The product line includes their synthetic graphite, fluid coke, graphitic carbon, crystalline graphite and flake graphite used in graphite foil, fuel cells, friction materials, and the cathode and battery industries. Superior Graphite’s line of Signature Graphite and Carbon includes a synthetic and three natural products that their customers use in many manufacturing applications. Superior Graphite really making its mark for customers and itself as an award-winning leader in American manufacturing.