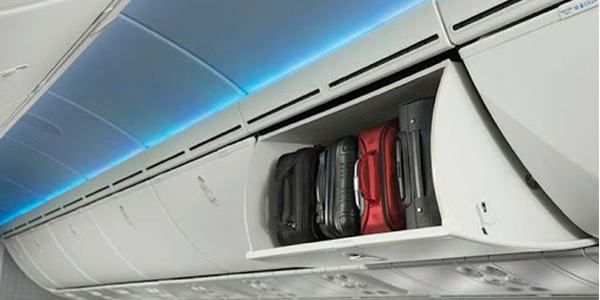 For most fliers, the overhead luggage bins on commercial airplanes are nothing but a headache. You hope you get on board early enough to snag a small overhead allotment; you quickly hoist your rolling bag and cram it inside before some other passenger nabs that space.

For Northwest Composites Inc., those overhead bins are a matter of bread and butter. From its roots as a small Boeing supplier, Northwest Composites Inc. has grown throughout its 16 years to a full-service international supplier of structural composites and airline interiors. An affiliate of C&D Aeorspace, the company specializes in designing, certifying and fabricating aircraft interiors and structural and nonstructural autoclave-cured aircraft components.

While airline interiors may not contain machinery crucial to keeping the airplanes aloft, interior parts such as ceiling panels, door liners, stowage bins, galleys and floorboards must pass a series of tests as stringent as those for any other airplane part. Northwest Composites’ parts undergo a battery of tests for strength, stresses, interface loading capacity, and flammability before they’re sent on to the original equipment manufacturer, said Derick Baisa, the company’s marketing manager.

This year, the supplier is looking to add two new leading-edge manufacturing processes to its process line-up. The new production methods have the potential to shave raw material costs by 30 percent while maintaining part strength, said Bill Karman, manager of research and development.

The supplier has already racked up a number of awards, recently receiving ISO 9001 and AS9100, quality certification. It was named Boeing interior-components supplier for 2001 and also was named a silver certified supplier for the Boeing preferred supplier program.

Now the supplier, which employs 350, is busy producing the ballistic, reinforced cockpit doors called for by many OEMs after Sept. 11, 2001. A number of other composite parts are always being made as well at the company’s 235,000-square-foot manufacturing plant, which is divided between two locations on a campus outside Marysville, Wash. In addition to making composite parts, Northwest Composites also operates small cell-manufacturing groups that make the machined fittings and sheet metal parts that are sometimes included on the composite as a fastening or joining mechanism.

Variety of forming technologies
At Northwest Composites, parts begin as prepegs, a combination of reinforced fibers and a resin matrix, supplied to the company in a form ready to be manufactured. The manufacturing process often used for prepregs is called hand layup. Manufacturers apply composite materials in successive layers on a tool or mold that defines the part geometry. Parts are cured in numerous methods, including, heated pressure vessels, ovens and heated tools.

Northwest Composites also uses a crushed core process for part creation. That process uses a male and female die made of machined metal. The prepregs are placed between the dies, then cured and formed via a heat source. The company is one of the few Boeing suppliers certified for crushed core processes, Baisa said.

Cutting edge technology cuts part costs
Only in the fairly recent past has the company offered its design and certification services. Northwest Composites employs 62 engineers on site who have access to the latest design and test technologies. To complement that capability, the company is wrapping up its investigation of two promising new methods of composite parts creation: vacuum assisted resin transfer molding (VARTM) and resin transfer molding (RTM), Karman said.

“One of the big reasons we’ve gotten more into research and development is that we used to be a build-to-print operation, then we increased our capacity for design,” he said. “We feel we also need to be on the leading edge of the new technology in developing composite parts.”

The VARTM process has shown to reduce raw material costs by about 30 percent, he added. The process uses dry fibers and a wet resin to infuse the parts. No prepreg is used in this method of creating composite parts. The cost savings comes about because the prepreg is an expensive product, Karman said.

The process is widely used in the boating industry, though the resins involved in those composites aren’t strong enough for aircraft. Recently, though, chemists have been creating resins that fit aircraft needs and are suited to the VARTM process. Northwest Composites’ research and development department stepped in to test the resins for its own VARTM projects.

The supplier is now making prototype parts via the VARTM process and a few customers are working with the company to help build its VARTM capabilities. One such test entails work with with Goodrich Group’s Landing Gear Division of Charlotte, N.C., on a project that would substitute a composite structure for an existing metallic assembly. The composite assembly should be ready for production by mid summer, Karman said.

“We hope to see substantial savings in cost and on the number of parts used to make up this structure,” Karman said. The assembly will be made primarily of a continuous, molded, composite part rather than the number of fasteners and other metallic parts that now make up the metallic assembly.

“We’re going to reduce the number of parts needed for this assembly by over 60 percent and that is without counting the rivets,” he added.

The composite assembly weighs 40 percent less than the metallic part, Karman said.
“Whenever you’re doing aerospace, weight is a big factor. Whenever you can save weight, it’s a big win with the airlines,” he said.

The other composite product method, called RTM, uses a press with matched metal dies. A dry-fiber fabric is placed in the mold and infused with a low pressure. The fiber has been either preformed to the exact shape of the molding tool or is hand-tailored during the loading process in the molding tool. A mixed resin and catalyst is injected into the closed mold. After the resin is cured, the mold can be opened and the finished component removed.

Advantages of this process include its clean operation. Components created through RTM have a smooth surface on both sides; parts can be manufactured to close dimensional tolerances, Karman said.

Northwest Composites is now testing its RTM prototype parts with an eye toward offering that process to its customers in the near future.

One trend in the aircraft industry is the move toward more use of manufactured composites on airliners, Karman said. For instance, engineers working on the Boeing 777 aircraft originally thought that between 10 to 20 percent of the aircraft’s parts would made from composite materials. Karman said the percentage on the completed airliner is more likely to be in the 40 to 50 percent range.

“The aerospace industry is using more of our parts, so they’re challenging the composites industry to make larger parts at less cost,” he said. “Our main mission at Northwest research and development is to implement ways to make composite parts at reduced cost and at higher strengths to capture OEM business. That’s why we’re looking at VARTM and RTM.”

By passing cost savings to OEMs, Northwest Composites expects to remain on the leading edge of composites technology while bringing more and more business its way.