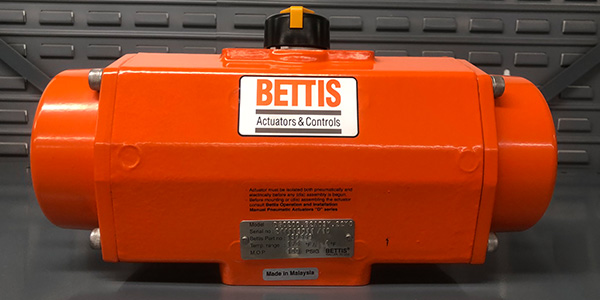 As you read this article, Bettis valve actuators are busy working worldwide to bring you products you need every day. Bettis actuators control the flow of some of our world’s most valuable resources: oil and gas. Although other companies manufacture actuators, Bettis has built its distinctive reputation on offering its customers what its competitors cannot. “We are one of only a few independent actuator manufacturers in the world,” says Dan Wisenbaker, the company’s marketing manager.

Furthermore, the company’s unique worldwide distribution system and its capability to provide a wide range of technologically advanced actuators best suited to a variety of specific applications have contributed to the company’s worldwide reputation of manufacturing cost-effective, high-performance actuators.

“We are the world’s leading manufacturer of pneumatic and hydraulic quarter-turn valve actuators,” says Wisenbaker. Bettis actuators are used primarily on ball valves, plug valves and butterfly valves. Actuators automate valves worldwide in industries as diverse as oil and gas production and pipeline applications; refining and petrochemical operations; power, water and wastewater management; and process industries, including pulp and paper, food and beverage, chemical, and pharmaceutical applications. The bulk of the company’s business is focused on oil, gas and petrochemical applications.

The company celebrates its 70th anniversary this year. Founded in 1929 in Houston, it originally functioned as an oil-field supply house. Its operation was humble until 1956, when the company built the first valve actuator. Since that time, the ISO-9001 certified Bettis Corporation has been manufacturing a wide range of valve actuators exclusively. Principal products include pneumatic scotch-yoke actuators and hydraulic and gas/oil actuators for quarter-turn and linear applications. The company also manufactures rack and pinion actuators with double-acting or spring-return configurations.

Headquartered just outside Houston in Waller, Texas, Bettis is a wholly owned subsidiary of Daniel Industries, employing 570 people. The Waller plant, at 165,000 square feet, is the largest of the company’s seven facilities. Bettis’ two Ohio facilities are the Shafer Valve Operating Company in Mansfield and Bettis Electric in Cincinnati. Bettis Canada, located in Edmonton, boasts 90,000 square feet. Bettis U.K. in Fareham, England, has 75,000 square feet of operating facility and manufactures everything that the Waller plant produces. Bettis France in Paris is mainly an automation and sales facility, with no manufacturing done there. Dantorque A/S in Esbjerg, Denmark, manufactures helical spline actuators.

“Some of the applications are very challenging,” explains Sid Davis, vice president and general Manager of the company’s Waller, Texas, facility. “We see on a regular basis requirements for very high-speed operation where valves must open and close in less than one-half a second. These are process conditions – high-pressure, high-speed and high-frequency operation, meaning these valves operate every 10 to 15 seconds continuously for 24 hours every day.” Bettis actuators endure severe service conditions, operating for mil-lions of cycles in long-term operations.

The breadth of Bettis’ product lines has achieved for them the status as a tough competitor, as they are one of only a handful of manufacturers producing such an extensive range of actuators. The company’s revolutionary premier G-Series scotch-yoke actuators are suitable for valves producing 6 million inch-pounds of torque. “This, to the best of our knowledge, is the largest in the world,” says Davis. These huge, high-pressure actuators may be used to operate pipeline valves in gas and crude-oil applications. “This line reflects the latest in technological advances in materials performance, and we consider these products the ultimate in valve automation,” notes Davis.

Bettis’ line of Dantorque helical spline actuators, used primarily in offshore operations, represents one of the most technologically advanced collection of actuators available in the world. Designed to operate in limited space on offshore platforms or in subsea operations, these helical spline actuators are smaller than the competition’s. Unfortunately, it took a tragedy to mandate sub-sea actuators that could operate in emergency shut-down situations. One of the company’s more challenging applications came as a result of a North Sea offshore oil rig platform explosion and fire. Bettis met the challenge to design and manufacture an actuator that could shut off the flow of gas to a platform on fire. A government mandate then required that these huge gas pipelines have valves and actuators sub-sea to shut down high-pressure gas flow in emergencies. “Bettis Corporation built the first actuators to perform that function sub-sea,” explains Davis.

Bettis has developed a unique structure governing its worldwide sales organization. “We consider it to be the best distribution system in the industry,” says Wisenbaker. Valve Automation Centers (VACs) are located throughout the world and are independently owned companies. “We sell to them, and they either have valve lines or they go out and acquire valves for a specific project. They then put together the Bettis products, the valves and all the controls necessary for a given project and sell it to the end user. This is the real strength of our operation.”

Bettis trains VAC representatives, who are then capable of handling all the service necessary in the field. “Nobody even comes close to the kind of distri-bution system we built,” says Wisenbaker. VACs are regional and promote regional trade. Bettis’ worldwide distribution system assures its customers local parts and service availability whatever the customer’s longitude and latitude. “This is what sets us apart from the competition,” says Davis. “You don’t have to go back to the factory for every requirement.”

Another Bettis distinction is that the company is an independent actuator company. “Some of the major actuator manufacturers in the world are part of a valve company,” explains Wisenbaker. “Other competing valve companies are not as motivated to buy actuators from them.”

The company embraces a “cell manufacturing” philosophy in some operations, which has proven successful in cutting costs of manufacturing. Utilizing the maximum amount of time available for actual machining processes, multiple processes are done in a single location. “The machine tools are cutting chips, and we are not spending our time moving parts around from machine to machine,” explains Davis. “For instance, in the old days you might see a machinist running a large part and the machine time on it may be an hour or so. While that part was actually running in the machine, the machinist might have been reading a book or the newspaper. Now, in the cell manufacturing system, machinists are doing a combination of other processes, working and utilizing their time effectively. The key here is that we are able to control our costs.” In fact, several Bettis products have not had price increases in about six years, while the margins on those products actually have improved.

“We are a company manufacturing high-quality products,” Davis says. Using technologically advanced materials to prevent rust and corrosion, the company prides itself on its stature as a performance company. “These technologies make it possible for us to manufacture the high-speed, high-frequency, million-of-cycles actuators.” Bettis’ expansion history has been through acquisition. Although the acquired companies operated profitably and were successful in their individual market areas, they were able to broaden their customer base under Bettis’ exclusive VAC distribution network.

Bettis will continue to expand and reinvest in advanced machining technology. The company is building a new plant at its Denmark Dantorque location to handle increased production of the helical spline actuator. Bettis Canada has been expanding since its acquisition in 1990. “Before acquiring it, it was strictly a Canadian company selling only in Canada,” says Wisenbaker. With Bettis’ VAC distribution system, the Canadian company is now a major international player.

The combination of unique manufacturing and management strategies is a winning one for Bettis. Its exclusive manufacture of actuators, its unique VAC distribution system and its diverse product lines all have contributed to the leadership role the company enjoys in the industry.