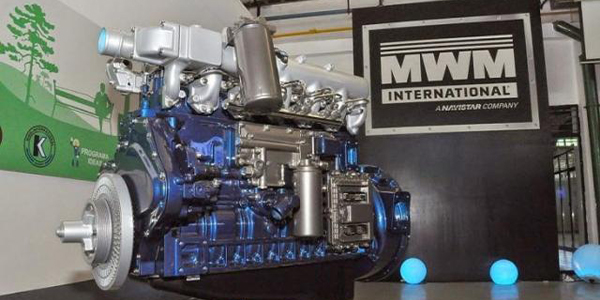 What happens when you combine a solid winner in the manufacture of automotive engines, with a rich history in Brazil, with an internationally acclaimed engine manufacturer?

You get an equally famous engine manufacturer that not only is able to supply the local market but expand into a global force.

The local arm of this juggernaut is MWM Motores Diesel Ltda. located in São Paulo, Brazil. The company manufactures engines from 2.5 liters up to 7.3 liters placement and 50 hp to 310 hp for pickup trucks and vans up to light- medium- and heavy-duty trucks, and also supplies agricultural, marine and electric generator applications. OEM customers include a number of the most important corporations in the automotive, agricultural and industrial segments. Annual production exceeds 85,000 engines with revenues for the privately held company reaching $700 million.

Daniel C. Ustian, Navistar chairman, president and chief executive officer, at the time of the acquisition, said the MWM purchase supports the company’s strategy to grow its engine business at both ends of the range of diesel engines currently produced. Ustian noted that in addition to increased volume, the acquisition provided an important addition to engineering capability and would allow the company to better serve customers in the growing South American market.

According to an article in Diesel Progress North America edition: “When International Engines South America… announced its intention to purchase Brazil’s MWM Motores Diesel Ltda., it was unquestionably one of the biggest engine acquisitions ever in that region. Yet over time, it’s possible that the deal … could have significance far beyond South America. It may in fact turn out to be one of the lynchpins to achieving the aggressive goals laid out by International’s parent, Navistar, in which the company is aiming to reach $15 billion in revenue by 2009, with engines making up $5 billion of that total.”

With the acquisition, the article continues, “International will be the largest diesel engine builder in South America.”

German roots
Indeed, while this was big news for the world of diesel engines, it turned out to be another great turn of events for MWM, which, in its own right, had become a major player in the region. Owned by the Thiele family, MWM began operations in Brazil in 1953. Its history, however, extends back to 1883, when Carl Benz founded Benz & Co. Rheinische Gasmotorenfabrik, with headquarters in Mannheim, for the production of two-stroke gas engines that could be used both for stationary applications and in automobiles. In 1922, the engine department became an autonomous company under the name Motorenwerke Mannheim AG, with the MWM initials present ever since. In 1926, control of MWM was taken over by the German industrial group Knorr-Bremse GmbH (which manufactured road and railroad brake systems) and, in 1933, it entered the small to medium-size diesel engine segment for agricultural or stationary use, thus completing its line of products.

MWM, in terms of engines produced, is the market leader in South America. Under a strong management team and with 20 years of leadership by owner Heinz Thiele, the company developed a strong reputation for its product and application engineering, quality and the value it delivered to customers and enjoys excellent
brand reputation.

“We have been successfully developing our business in South America together with our customers, suppliers and other business partners,” Thiele said at the time of the acquisition announcement. “Following repeated customers’ demands over the years, the internationalization of MWM has been a strategic target, aiming for volume scale; a solid base for long-term competitiveness. In addition, the level of investments in new technologies needed to meet the most stringent emissions requirements led to the conclusion that an alignment with a global company is supportive to fully attend the future technical demands in a cost effective way.”

José Eduardo Luzzi, MWM’s executive director of sales and marketing, adds that “International and MWM created the largest development center of diesel engines in South America,” which, in a recent interview, he describes as “remarkable. South America is very competitive in terms of labor costs. We’re now starting to export engineering services to our parent in North America.” Among the array of leading OEMs the company supplies are General Motors in Brazil, Nissan, Ford, Volkswagen, Volvo and Land Rover; Iveco for heavy-duty trucks and Massey & Ferguson in the agricultural equipment market.

Engine engineers
The company is consistently innovating and researching ways to give the world the next big engine innovation. Recently, it unveiled its new electronic engines family named MWM Acteon. The result of more than $40 million in investments, MWM Acteon engines are available in 4 and 6 cylinders in line – 4.12 TCE e 6.12 TCE – with 4.8 and 7.2 liters, respectively. “The MWM goal on developing this product was to match the high technology, which is 100 percent national, with the most rigorous legislations of pollution emission control,” says Luzzi.

The MWM Acteon engines can be used on vehicular applications that require maximum power between 150 and 206 cv. The 6-cylinder versions were projected to be used in the power range between 210 and 310 cv. “These engines have dimensions and weight similar to the current mechanical engines, but with an increased power over 30 percent,” explains Luzzi.

This relation of weight to power, because of the combinations of the electronic injection benefits, the increasing of the cylinder capacity and use of tougher materials, make possible the use of smaller propellers, but with more power. The MWM Acteon electronic engines of 7.2 liters have better performance than similar mechanical engines with a much higher cylinder capacity.

The new Acteon family also complies with the EURO 3 regulation, as well as future pollution legislation in the U.S. and Europe. “These characteristics make these engines a feasible alternative and competitive,” says Luzzi.

Another important product is the NGD 9.3 E engine. One of its exclusive features is the patented exhaust brake, described as “the most powerful and quietest in the market,” with around 70 decibels against 85 decibels offered by competitors. It also enables better utilization of power and torque at any rotation range.

The EGR system works by reusing part of the exhaust gas that goes through a gas-water cooler, and is then mixed with the intake air. This process helps reduce the high temperature inside the cylinder, reducing the production of nitrogen oxide (NoX) and smoke, allowing for more efficient combustion.

Another characteristic of the engine is the electro-hydraulic injection system, HEUI G2, which offers better precision of injection time for optimized combustion. The G2 is a common-rail designed system, without high-pressure external ducts. In addition, it has a lighter and more precise digital valve of fuel control that provides faster responses, contributing to better engine performance.

The new model offers power between 335 hp and 375 hp, in compliance with Brazilian emissions regulation Proconve Phase 5. It will be totally produced in Brazil starting in 2006 in order to answer the assembly plant’s demand for a more powerful engine and, at the same time, more economical and considerably less pollutants.

Another series, the NGD 3.0E, was developed at International’s plant in Brazil. It features high power density and excellent torque curve, especially in lower rotations. It also features fuel economy as well as reduced noise levels, vibrations, and maintenance costs. For light commercial vehicles the engine is a “diesel high speed,” which brings value to the vehicle. For trucks and buses, its rotation is lowered in order to increase durability, and maintain high torque for better driveability and less gearshift.

“These products are the basis for our growth,” explains Luzzi, adding that MWM is setting its sights on reaching $1 billion in sales by 2010.

All of these activities, Luzzi adds, “are very important in terms of our potential growth. We have set the standard for high quality in South America and the brand itself is well recognized. We have the ability to grow well beyond South America.”