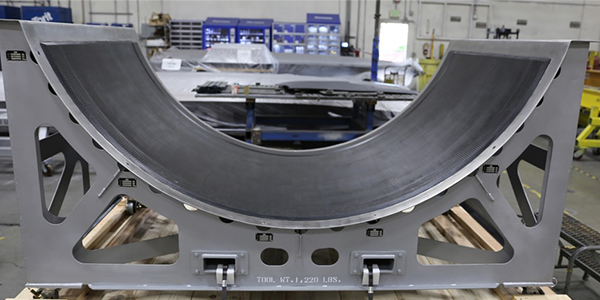 In 1939, an ambitious young man with entrepreneurial ideas arrived on the shores of a distant continent, far from his Czechoslovakian homeland. The young man would leave very large footprints, creating not only a town bearing his family name, but a world-renown company as well. The man was Thomas Bata and the story of his high-tech precision machining company is another chapter in the book of Canadian-American success stories.

High-Tech Precision in High Gear
Today, Invar Manufacturing Limited of Batawa, Ontario, is a world leader in high-tech precision machining capabilities, primarily for the automotive industry. “About 90 percent of our business is focused on the automotive industry,” says Bob Reid, general manager. “We manufacture a wide range of components used in turbo chargers for diesel engines found in highway vehicles like construction truck and three-quarter-ton trucks you see pulling utility trailers and floats, for example.”

This is a company that thrives on developing components for very specialized and critical industries requiring precision parts for the performance-critical operations the components are assembled into. A smaller segment of Invar’s business is devoted to the manufacture of components for the nuclear power industry. “We build the shut-off mechanisms for CANDU nuclear reactors generating power,” Reid says. “These components are very critical to power plants, as they are used to shut down the activity in the calandria”.

Other components Invar supplies to the nuclear power industry include end fittings, shield plugs and channel closures. “All of these components are part of the calandria – which is where the fuel bundles pass through and generate heat which, in turn, activates the steam generators and then generates electrical power,” Reid says.

Nimble and Responsive
The operations at Invar may lead the observer to conclude that this company had been founded as an automotive supplier. However, this business model has been in place 10 years.

“Up until about 10 years ago, we did no automotive work at all,” notes Reid. “About 85 percent of our business was focused on the defense and aircraft industries.” When those industries slowed down, Invar recognized it would need to respond to the changing marketplace in order to survive and remain successful. “So we moved into the automotive industry, which is where our parent company has been involved for a number of years,” explains Reid.

Was the transition an easy one? “No, it’s really a whole new way of doing business for us, but we have adapted extremely well,” Reid says.

Starting with its first automotive project 10 years ago, the company quickly and deftly developed a solid customer base. “The main difference in this industry is the delivery response our customers expect – and that sense of just-in-time urgency to produce and meet delivery dates and daily commitment numbers.”

Intensely challenging, the automotive industry offers Invar numerous opportunities to prove its mettle. “I sometimes describe to people the differences I see in this business as opposed to when we were a job shop producing components for the military, aircraft, and nuclear industries,” Reid says. “In the old days, if you had a manufacturing concern on Friday, you went home and forgot about it until you arrived on Monday with a fresh approach. But, today, if you have a problem on Friday, you need to be here to solve it on Saturday and if it’s not fixed on Saturday, you need to be here on Sunday as well.”
Manufacturing response and expertise are core competencies at Invar, where a skilled workforce combines with state-of-the-art technology in all of the company’s SPM (special process machine) operations. “We have over 60 machinist-journeymen in our workforce of about 450 people,” Reid says. “This is why we can take on a job and very quickly analyze it and then be able to produce fixtures and actually get parts to our customers in record time.”

Lean and Visionary
A sure-fire method of determining a company’s success is to assess the contentment of both employees and customers; at Invar, employees are happy and customers are content. This could be partially attributed to Invar’s operating philosophy that incorporates lean manufacturing, business manager responsibility, and a Vision 20/20 Program.

The company’s Vision 20/20 Program is based on the concept of a three-legged stool, where each leg of the stool represents customer satisfaction, employee satisfaction, or financial satisfaction. “Without all three legs being strong, the stool will not stay stable,” explains Reid, noting this is an overall Linamar philosophy. A monthly score reports on how each leg performed and employees are paid a bonus based on the performance of the overall company. “This philosophy was developed by the Linamar corporate office to eliminate waste and make each division as streamlined and productive as possible so that the benefits got directly to our customers and to our employees.”

Innovative Competition
Reid envisions Invar will evolve to a higher level of specialized machining concepts in order to remain competitive. “We will continue to develop the best in technology in order to offer our customers highly innovative components in order to be competitive with countries like Mexico and China, where new production enterprises are evolving” Reid says. “This means specialized machines will need to be built so that we can manufacture a part completely – without having to have it undergo several handlings so it does not have to pass from one machine to another machine. This was the older concept employed with CNC machines. Our SPMs are developed so that they can do the same job as several CNC machining centers did in the past.”

It sounds like an echo from the past: inventing new technologies in response to the ever-changing business landscape. Thomas Bata would be proud to see the continually evolving directions of Bata Engineering, the company he founded to manufacture shoes when he brought over a group of fellow Czechoslovakians to help him in his factory. In addition to the shoe factory, Bata built a machine shop, used for developing and building state-of-the-art machinery for shoe production. Then, during World War II the machine shop began producing components to support the war effort. After the war ended, Bata engineering continued to produce components for the defense industry and the company evolved to producing injection molding machines and water-jet cutters. In 1987, Linamar Corporation of Guelph bought the company and renamed it Invar Manufacturing.

Linamar is a huge success story unto itself having started as one small shop in Guelph in the 1960’s and growing to over 30 individual facilities such as Invar in Canada, United States, Mexico and Europe.”Linamar had been focused on the automotive industry very heavily and when the defense industry went flat during the early 1990s, Invar aggressively began to develop its expertise in the automotive industry,” Reid explains. Now, more than 60 years after Thomas Bata’s arrival, his namesake company town – Batawa – still exists and his company still thrives.

It is no surprise that Invar is a major supplier to some of the most respected global giants of the automotive industry, such as Honeywell and Delphi. Invar will continue to supply quality, high-precision components with its focus on customers and employees. “We will continue to offer customers the ability to put raw castings in our production machines so when components come out the other end, they are completely finished parts of superior quality done in high volume at a competitive cost,” Reid concludes.