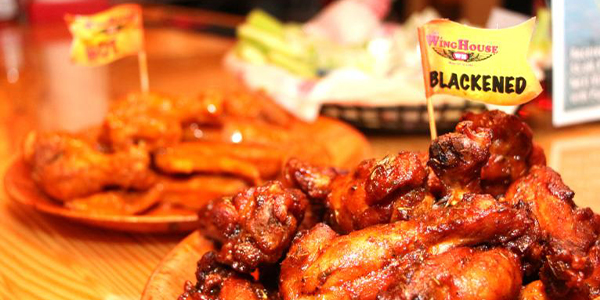 Keeping up with the demand for chicken wings on Super Bowl Sunday is like getting blitzed by the Eagles; the only difference is, if you’re running a restaurant you have to complete the pass – in other words, fill the order. There’s no letting the defense get you down.
That’s a lesson learned by Crawford Ker, former pro-football player with the Dallas Cowboys and later with the Denver Broncos in a career that spanned more than a decade. Upon retirement in 1994, Ker opened the first Ker’s WingHouse Bar & Grill in the Largo area of Tampa Bay. The restaurant was founded as a hybrid between a wing joint and a sports bar, with special features including beautiful girls to work as wait staff and bartenders, known as the “WingHouse Girls,” a plentiful number of TVs, sports promotions and a game room.

Ker recalls his first Super Bowl Sunday, being on the other side of the line, so to speak: “The first year I was in business both managers were off that day and it was a nightmare – it was like the Eagles blitzing you from all sides. But you have to keep your composure,” he recalls, adding, “I’ve never seen so many wings go out of the kitchen; we serve 20,000 wings per unit (on Super Bowl Sunday). It’s our biggest day of to-go service”

Apparently, Ker kept his composure quite well because he now has 21 restaurants (in Florida and Dallas, Texas) all of which have survived 12 years of doling out wings on Super Bowl Sunday; these happen to be the company’s specialty, hence the name. In his new career as restaurateur, Ker says he has borrowed from what he learned during his pro-football career to keep on top of the business. “I had to be the head coach and train the players the way I wanted them to play; I had to learn the other side of the game,” he says.

His learning curve also involved weathering a lawsuit from the popular Hooters franchise of similar establishments and similarly endowed females. Hooters took Ker to court on the grounds that the WingHouse was infringing on Hooters’ overall theme – Ker won and also prevailed in the counter claim as well.

Through it all Ker understood that adversity builds character. “You won’t last long without character,” he says, adding that his restaurant has “always tried to be on the cutting edge. Our philosophy is to be brilliant on the basics with good customer service, a good product and a good price.”

Altogether, Ker’s WingHouse serves seven different varieties of wings, from its own “We Serve’em Naked®” wings that are skinned and marinated to lightly blackened skinless wings, deemed the healthiest wings in the world; the House on Fire® (if you dare), variety, with Asian sauce, “a Teriyaki sesame seed sauce we found while traveling through the Far East,” and Dallas Secret Sauce, a honey BBQ mixture “that we stole from the heart of Texas,” in addition to the usual mild, medium, and hot sauces. (The company currently is bottling its sauces under the WingHouse brand to sell to regional supermarkets.) Rounding out the menu are the assorted sandwiches, burgers and wraps – as Ker says, “good American food.”

With restaurants that generally are bigger in scope than the competition’s, measuring anywhere from 5,000 to 10,000 square feet, the WingHouse offers an overall sports bar/casual dining atmosphere that also includes a full liquor bar, pool tables and video games, with a motif that features pictures of WingHouse girls as well as photos from Ker’s pro-football career (Emmett Smith was his teammate while playing for Dallas); he also played with former-Cowboys quarterback Troy Aikman and has a longstanding friendship with ED “Too Tall” Jones, a former Cowboys defensive end.

According to Ker’s WingHouse Web site, Ker grew up in Dunedin, Fla., and during his high school years at Dunedin High School he was introduced to two things that would forever shape his future: the football and the restaurant industry.

Most of his free time was spent working as a dishwasher in a local Italian restaurant where his father was the kitchen manager; only during his senior year did Crawford play football. During summer breaks he learned more about the restaurant industry, including cooking and waiting tables.

His outstanding performance as an offensive lineman attracted the University of Florida, and with the Florida Gators, Ker earned All-American honors and was on the 1984 team that won the first Southeastern Conference Championship title for the school.

He was later signed by the Denver Broncos and starred there in the 1991-1992 season, helping Denver go to the AFC Championship game. Ker adds during his interview: “Through working with coaches like Tom Landry and Jimmy Johnson I learned to run a business.”

Patrons to Ker’s WingHouse are offered other treats, such as membership to Ker’s Klub, which includes WingHouse news, photos and special offers via e-mail. They may also purchase assorted T-shirts and hats as well as an annual calendar featuring, what else? The WingHouse girls, of course! But Ker is quick to point out that while, yes, “pretty girls need jobs, too,” he is also altruistic in his mission to aid women’s causes, especially battered women’s organizations and frequently contributes time and money toward various entities. Some of the charities the company is dedicated to are the Children’s Home Society, Special Olympics and Women’s Crisis Prevention organizations throughout Florida.

With sales at over $50 million, Ker’s next step is to open four more corporate stores and then branch out into a national franchise. “We’re now fine-tuning the system,” he explains, “and trying to hone our model. We’re also trying to do positive things for the community.”