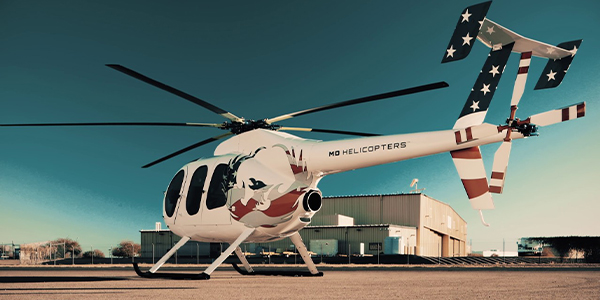 Everyone likes a comeback, especially when it’s an icon of sorts that has paled from its past glory.

This is the case at MD Helicopters where acting CEO and Wall Street dynamo Lynn Tilton is seeking to make a difference. Investment funds managed by Tilton’s Patriarch Partners, an investment firm based in New York and Charlotte, N.C., acquired and immediately began a restructuring of MD Helicopters in the third quarter of 2005. To many fans of the MD “little bird”, Tilton is a bit of a heroic figure and her MD Helicopters a phoenix, rising from near-bankruptcy to reclaim its place among the most famed of wartime sky birds.

Tilton alluded to her vision for MD when making another announcement, surrounding the purchase of Heritage Aviation, Ltd., an industry leader in the modification and completion of helicopters, well known for its innovative approach to the integration of complex, sophisticated avionics, autopilot systems, and delivery of VIP interiors.

“Patriarch looks at industry dynamics and then assesses how we can build value by synergizing expertise,” Tilton had said at the time of the Heritage announcement. “This transaction galvanizes the intent of our purchase of MD Helicopters. We are creating an aerospace platform that not only produces aircraft, but one that also controls its own destiny by bringing much of its supply chain under its own umbrella – an umbrella that now includes state-of-the-art completion and refurbishment services.”

Returning to the limelight, however, is more than a company, but a well-loved and highly regarded flying machine. The Internet hosts many sites dedicated to lauding the agility of the little birds, including one which articulates on the helicopter’s purpose: “One of the prime mounts of the Army’s Nightstalkers since their inception is the Hughes/McD 500 series of helicopters, known by pilots and passengers alike as “little birds.” The AH/MH-6 Little Bird has been based on both the Army OH-6A Cayuse and Hughes/McDonnell-Douglas MD-500/530 series civil helicopter. Originally designed as a military scout during the Vietnam War, the OH-6 was widely used as an observation and cavalry platform.”

“There is a love for this helicopter by operators across the world,” Tilton says, adding, “There is a cult behind this. Our customers want to fly these helicopters – there’s incredible history and technology associated with this company. Many operators have told me they only survived a crash because of the MD 500. It has incredible control and flexibility.”

That love is evident in the hundreds of emails sent to Tilton daily, including one from Chris Krane of Platinum Helicopters, Inc., in Palm Springs, Calif.: “I believe in MD Helicopters myself. My first ride in a MD 500 set the tone for my love and desire of the company. Good for Lynn Tilton! She believes in her product and has not given up the hope of re-establishing a great name in the helicopter industry. She has stood up to the plate and taken the challenge while others have decided to leave the company.”

Big birds
The company founded by legendary aviator Howard Hughes, then owned by McDonnell Douglas, then by Boeing, and eventually sold to a Dutch entrepreneur, “had lost its glow and reputation and was on the cusp of being shut down,” Tilton says. “Most people had written it off.”

And when Tilton, whose mission through Patriarch, which owns interests in 67 companies, is to revive companies undergoing periods of pervasive change, entered the picture, the complexities of not only running, but reviving, an aerospace company – and a famous one, at that – presented an array of challenges. “This company was loaded with debt; we paid off $85 million in debt and $40 million in trade credit. We did not want to deal with a long protracted bankruptcy, so we had to rapidly rebuild the supply chain, to bring this company back as quickly as possible.”

Part of its reestablishment entails once again bidding on contracts. At present, MD is waiting to hear on a $2.5 billion utility contract with the U.S. Army. “I stood in front of the U.S. Army and told them I could deliver, and I always live true to what I promise. I love this company and I enjoy being part of its comeback,” she stresses.

Yet it is not only past glory on which MD Helicopters is positioning its future. Offering helicopters equipped with advanced NOTAR® technology has made the machines even more attractive in the marketplace. Andy Logan, who developed the technology in the 1970s, when working on the Apache program, at the time was addressing a concern to improve a helicopter’s vertical performance and circulation control, tail boom. “The biggest problem has been the tail rotors, which are the second leading cause of accidents behind the power system. Twenty-five percent of all accidents are at the back end of the aircraft – they back into buildings, trees, sometimes people because they can’t see. Also tail rotors are very noisy.”

What NOTAR® provides is an anti-torque system with safe, quiet, responsive, FOD-resistant directional control. An enclosed variable-pitch composite blade fan produces a low pressure, high volume of ambient air to pressurize the composite tailboom. The air is expelled through two slots that run the length of the tailboom on the right side, causing a boundary-layer control called the Coanda Effect. The result is that the tailboom becomes a “wing,” flying in the downwash of the rotor system, producing up to 60 percent of the anti-torque required in a hover. The balance of the directional control is accomplished by a rotating direct jet thruster.

NOTAR® effectively eliminates all of the mechanical disadvantages of a tail rotor, including long drive shafts, hanger bearings, intermediate gearboxes and 90-degree gearboxes. “This is the second distinct invention in helicopter configuration since the beginning of the century,” Logan says. “Operators can control the aircraft the same way but they’ll notice a lot smoother, quieter ride. This is the quietest helicopter in the world.”

NOTAR technology can be found on aircraft including the MD Explorer®, the machine that forms the core of MD’s current military bid. An international helicopter industry advisory board guided the design and development of the MD Explorer with an objective to produce a multipurpose twin-engine helicopter that would set new standards in performance, affordability, dependability and safety.

The company also produces the ever-popular 500 series, which includes the following:
• The MD 500E® delivering the highest speed, payload and productivity in its class. Rear seat passengers have greater headroom and visibility than earlier Model 500s. Refinements provide first class front and rear seating with ample legroom. The T-shaped instrument panel provides place for a full complement of modern avionics. With a five-bladed mail rotor and the choice of a 420-shp Allison 250- C20B or 450-shp Allison 250-C20R turbine engine, the MD 500E is the best performing helicopter in its class.
• The MD 530F®, engineered to meet requirements for hot-day, high-altitude operation. Equipped with the 650 shp Allison 250-C30 engine, the MD 530F® operates more effectively in hot, high environments than other helicopters in its class. Its high altitude lift capability is achieved by main-rotor blades six inches longer that the MD 500E®. The tailboom is extended eight inches and the tail rotor blades have been lengthened to provide increased thrust and directional control at high altitudes.
• The MD 520N®, a fast, agile, lightweight, turbine powered, all purpose helicopter. Advanced technology has been used in the design and construction of the aircraft, resulting in excellent speed capabilities, high payload-to-empty-weight ratio, passenger/crew safety and handling and performance capabilities. The MD 520N® helicopter has a fully articulated five-bladed rotor system which provides excellent control and maneuverability characteristics. With its advanced NOTAR® anti-torque system. The MD 520N® is a member of an exclusive class of the safest, quietest helicopters in the world.

In addition, there’s the MD 600N®, an eight-place, light, single-turbine engine helicopter that provides high performance and increased capacity to give the customer greater versatility. It flies faster, hovers higher, and provides the agility and exceptional handling for which the MD 500® series is known.

Taking the industry by storm
In re-inventing its business, Tilton has sought to build a large global footprint, first by purchasing Heritage Aviation, then by re-evaluating the company’s supply chain in the face of suppliers that were slow in getting the company its parts. Starting a $100 million venture with another of the Patriarch Fund’s companies, Global Automotive Systems, precipitated a move to Monterrey. Now, MD Monterrey Aerospace manufactures fuselage for the company. In addition, MD is working on a joint venture contract program in China, as well as a maintenance, repair and training center in the Middle East.

Out of production when Tilton took the helm at its Mesa, Ariz. facility, MD is primed to produce 125 helicopters a year; combined with its Mexico and China facilities, Tilton expects that number to grow to 300. “We’re only taking orders now on what we know we can deliver and how quickly we can supply,” she says.

One thing is for certain: Tilton has turned the industry on its head. “We have taken this industry by storm because I speak truth; customers have the right to make decisions based on truth. Mediocrity has been accepted in the industry for so long. People in that aircraft are our number one priority.” Of MD’s turn-around Tilton adds: “Most people laughed when I said I could do it.” But most people are glad she did. Simply put by Col. Tom Reeves, U.S. Army (ret.) Master Army Aviator, Unicoi, Tenn.: “We need MD in the mix.”