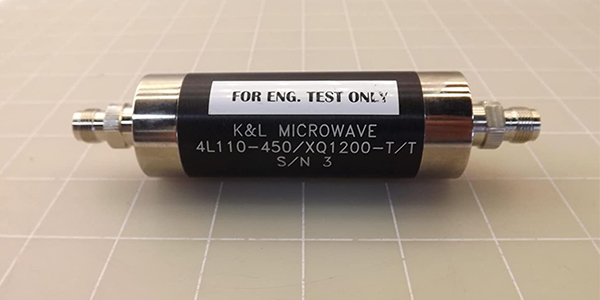 In increasingly competitive world, K&L Microwave, an industry leader in the design and manufacture of both radio-frequency (RF) and microwave filters, is committed to doing things its own way.

Several years ago, K&L Microwave, which is based in Salisbury, Md., on that state’s Eastern Shore, faced a difficult decision: Whether to outsource its plating operation, as some of its rivals had done, or make a large investment to bring the facility, an integral part of its manufacturing operation, into the 21st Century.

“Most companies are shying away from plating,” explained Al Knezevich, the company’s director of quality. “But we had to make a strategic decision. We are vertically integrated, and that is one of the strongest reasons that customers depend upon us.”

And so, backed by the investment power of its $5-billion parent company, Dover Corp., K&L Microwave spent some $3 million on the most advanced state-of-the-art plating facility in its industry. One of its prime features was a closed-loop system that takes the discharge of wastewater, which had been about 30,000 gallons a day, and reduced those releases to zero. That is typical of the approach of a company that’s been lauded by both the U.S. Environmental Protection Agency and by community leaders in Salisbury as a good corporate citizen.

Protecting against IEDs
With a wide array of products that serve a diverse range of industry groups, K&L Microwave has been able to withstand downturns in some areas, such as the steep drop on telecom spending in the early 2000s, and continue to grow toward $100 million in annual sales.

In recent years, any reductions on the consumer market have tended to be more than offset by the increase in military and homeland security spending prompted by the terrorist attacks of Sept. 11, 2001, and the subsequent military actions in Afghanistan and Iraq.

In fact, today K&L Microwave is playing a key role in seeking to protect American and coalition soldiers fighting in Iraq, by working on devices that either detect or jam the so-called “improvised explosive devices,” or IEDs, that target troops in roadside bombings in that war-torn country.

“The big push has been with IEDs. Activity has increased dramatically in the last year and a half,” said Greg Carmean, director of sales and marketing. He said that the ever-changing nature of the fighting in Iraq and Afghanistan leads to constant work in changing and improving the platforms for the microwave technology used by troops.

K&L Microwave has long been the leader in updating its microwave filters. Several years ago, the company pioneered a unique type of online software called the K&L Filter Wizard. Customers can visit the site with their desired specifications, and the software will return a list of products that match. If the Filter Wizard selection algorithm cannot match the criteria specified, visitors are forwarded to the company’s quote request page.

“We’re constantly upgrading the software each and every week. The most recent was released Tuesday of this week,” Carmean explained. “Everyone else has a software download or a disk. There’s always a risk that you’re not operating with the latest and greatest.”

Strong backing from Dover
K&L Microwave has been focused on the latest and newest technology since that company was founded in 1970 by local entrepreneur Richard Bernstein, who had experience in the filter business and initially focused largely on military applications from a small, 1,400-square-foot facility. Today, the firm is a leading manufacturer not just of filters but also of integrated subassemblies and electromechanical and coaxial switches for commercial and military applications.

A turning point came in 1983, when K&L Microwave was purchased by Dover Corp., the New York-based holding company that is listed in the Fortune 400 roster of top firms and is publicly traded on the New York Stock Exchange. Dover has been a source of investment capital and leadership for K&L Microwave. Through Dover, K&L has been able to establish a good working relationship with a sister company, Dow Key Microwave of Ventura, Calif., which markets a complimentary product line of electromechanical switches.

“They try to buy the best and then give them what they need to be even better,” said Dave Howett, vice president for operations. Generally, he said, Dover’s policy is to stand back and let its various subsidiaries do their own thing, although he noted that K&L Microwave and Dow Key have recently been reorganized into a new microwave products group.

Currently, the company employs roughly 435 people, mostly in Salisbury and primarily on the manufacturing side. In addition to three large facilities at its Maryland headquarters, K&L Microwave operates a facility in Santo Domingo, Dominican Republic that focuses on commercial products.

Despite the push to expand its manufacturing base internationally, K&L has also invested heavily in its Salisbury operation. In addition to the new plating operation, relates Joe Searing, director of supply chain, the company recently spent more than $1.5 million on upgrading its machine shop, with spending on high-speed and CNC machining aimed at reducing downtime and increasing productivity.

Continuous improvement
K&L Microwave also invests heavily in its human capital, including continuous improvement teams that focus on making highly specific changes in productivity that have led to dramatic upgrades overall. Last year, the company’s sales rose by 15 percent even though its resources were the same.

“We have a top-down drive for continuous improve-ment, with a very positive and a very receptive culture,” Knezevich said. The company’s drive also extends to environ-mental protection. Not long ago, K&L was recognized as the first in Maryland to enroll in the U.S. Environmental Protection Agency’s voluntary National Partnership for Environmental Priorities. Under the program, businesses strive to adopt practices to reduce waste and make more environmentally sound products.

K&L Microwave executives recently looked at their future business plan, and saw growth in a number of markets that the company serves, including fields such as medical and automotive, as well as products that work to minimize interference and other wireless products.

When it comes to success and long-term growth, K&L has a knack for finding the right frequency.