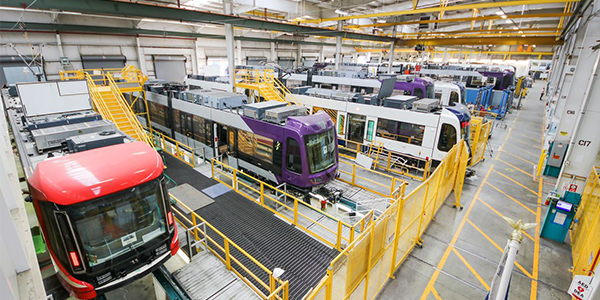 Railroads have been the backbone of American transportation, linking people and goods across the country since the dawn of the Industrial Revolution. Ensuring that these networks run in peak condition is the Transportation Systems Group (TS) of Siemens AG, one of the worldwide leading international suppliers to the railways industry. Its United States division, Siemens Transportation Systems USA is helping transit owners throughout the country improve their level of comfort and service.In the United States the company’s role has been substantial. For the New York City Subway, Siemens Transportation Systems USA was responsible for improving the security for stations, tracks, trains, and passengers. Through Railcom Manager, the company provided New York with an extensive network of CCTV monitoring, automation and I&C technologies. In Houston, Siemens completed a turnkey project that revitalized light rail transit, creating not only an attractive mass transit alternative but also a faster way to get around the city.

Last March, the company garnered yet another rail feather in its cap; this one came from the Charlotte, N.C. City Council, which approved the purchase of 16 S70 light-rail vehicles (LRVs) from Siemens Transportation. The purchase was made by Charlotte Area Transit System (CATS) for use on the South Corridor Light Rail Project. The contract was valued at $52.5 million.

The South Corridor Light Rail Project is a line running approximately 10 miles from uptown Charlotte to Interstate 485. The system will include 15 stations and is expected to open in fall of 2006. Delivery of the first S70 LRV is projected for January 2006. Siemens is currently bidding to provide the electrification and signaling infrastructure for the rail line.
At the time of the contract announcement, Oliver Hauck, president and CEO of Siemens Transportation Systems, Inc., had said that Charlotte represented the 10th U.S. city to acquire Siemens LRVs and the third to acquire the innovative S70 vehicle. “We are proud to play a role in increasing mobility for the people of Charlotte and expanding economic development in the region,” he said.

Each S70 vehicle demonstrates the ingenuity at work at Siemens; for example, each has a 70 percent low-floor section that eases accessibility for all passengers, particularly those with mobility issues. The vehicles are capable of speeds of up to 65 miles per hour and feature room for 236 passengers. The car shells are constructed of low-alloy, high-tensile (LAHT) steel with a composite fiberglass covering. This modern construction method produces a higher structural efficiency and reduces energy consumption during operation. Siemens’ Sacramento, Calif. manufacturing facility will construct the car shell and complete the final vehicle assembly. The S70 LRV is currently in use in Houston, and cars are also being manufactured for San Diego, Calif.

Spurring more growth
Most recently, Siemens Transportation Systems received an order from North County Transit District (NCTD) to supply 12 Desiro Classic two-car diesel multiple units. The order is worth over $50 million and marks the first time that Siemens is to supply multiple units to the USA.

“For Siemens it is the entry into the U.S. market for trains. It’s a big success, and indeed a milestone success,” notes Dietrich G. Möller, president of the TS trains division. The vehicles are earmarked for NCTD’s “Sprinter” regional transportation project that is to provide passenger rail service on an existing freight branch line connecting the Southern California cities of Oceanside, Vista, San Marcos and Escon-dido. The line is 22 miles long, serves 15 stations and runs parallel to Highway 78. Due to be inaugurated next year, it will offer bi-directional service every 30 minutes for a total of 64 train journeys daily. The diesel multiple unit (DMU) vehicles will be built for a top speed of 55mph and cover the distance between Oceanside and Escondido in 54 minutes, making them 21 minutes faster than the existing express bus connection.

According to a company description, the name Desiro stands for a Siemens TS multiple-unit concept uniting cost-effectiveness and comfort. Multiple units from the Desiro family of trains can be deployed both in regional rail and in mass transit service. The modular construction concept gives the operator considerable possibilities in areas such as interior design, control system and propulsion systems. The standardized components, which have proven reliable in daily passenger service in Germany, Denmark, Hungary and Rumania, ensure high availability of the vehicles and low lifecycle costs.

The two-car vehicles come with diesel-mechanical drives. The low-floor area offers passengers a high degree of comfort when boarding and exiting. And there are other amenities as well, particularly in the interior design; these include an on-board information system with digital and acoustic next-stop announcement and separate spaces for parking baby carriages, wheelchairs and bicycles. Other features are the bright and spacious interior, the large window bands, and the air-conditioning system. Air-suspension trucks contribute to a high degree of riding comfort.

The two autonomous six-cylinder turbocharged diesel engine units with five-speed automatic transmission have an output rating of 315kW and meet the emission standards set by Euro III, underlining the importance of environmental protection and the need to keep the Californian exhaust norm EPA TIER 2.

Pioneering new technology
Siemens has been instrumental in shaping the transition from mechanical to electronic and computer-controlled systems. The company today is the internationally leading supplier of electronic interlockings, rail signaling and safety systems, communication and train control technology. Worldwide, the group has taken the lead for driverless mass transit systems as well as in the promising area of fully automatic metro systems.

Among its state-of-the-art innovations is CargoMover(tm), a fully automatic driverless truck on rails that will enable freight traffic by rail to be even more competitive in the future. CargoMover was developed to take the burden off congested highways and to get freight transport moving again.

Siemens also is the world market leader in the construction of turnkey railway systems. The customer is offered turnkey systems from a single source and, if requested, the appropriate, corresponding financing concepts as well. Because of the ever-increasing importance of the service sector in the rail industry, the company pooled its entire scope of service competencies to form a separate business unit. The range of services offered by this division comprises maintenance, refurbishment, spare parts management, and services such as consultancy, training and documentation as well as innovative diagnostic systems.