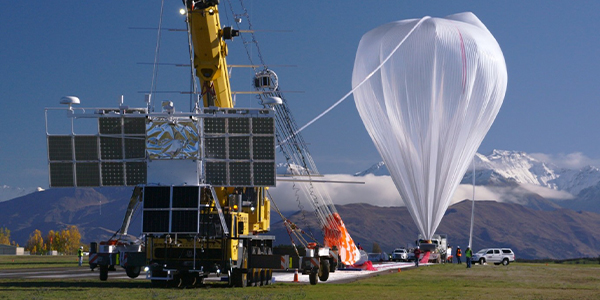 Villagers in rural regions of war-torn Afghanistan await pallets dropping to earth from parachutes. Fans at a New Jersey Nets basketball game clap boisterously as a remote controlled blimp descends from the rafters of the Continental Airlines Arena. A Navy pilot on a test run in an undisclosed location hones in on a decoy SCUD missile launcher. Jon Bon Jovi rocks a concert crowd from a stage festooned with enormous inflatables. Decades of Macy’s Thanksgiving Day Parade attendees watch their favorite giant helium balloons waft along the skyscraper canyons of Manhattan. Spider-Man bounces off festival balloons in one of the many exciting scenes from the blockbuster movie of the same name.

One of the company’s biggest customers is the United States military, for which Aerostar has become a key supplier of hi-tech manufactured parachutes. In fact, at the beginning of 2004 Aerostar was to begin its second major government contract to manufacture cargo parachutes for the U.S. Army. The new agreement is for $7.75 million over approximately 12 months. The parachutes will be used to drop supplies and equipment for the military.

Raven roots
Aerostar is owned by Raven Industries; both companies are based in Sioux Falls, S.D. Raven began in 1956 as a manufacturer of high-altitude research balloons for NASA and the American space program. From that single product line, the company evolved into a successful, diversified manufacturer publicly traded on Nasdaq (RAVN) with three divisions and one wholly owned subsidiary.

“Each division operates independently for maximum focus and flexibility,” said Mark West, President of Aerostar International, Inc. “We balance the benefits of decentralized entrepreneurial operating businesses with strong corporate leadership and staff support. Standardizing and centralizing support functions give us an organizational structure that is efficient and consistent while still allowing our division managers a great deal of autonomy in operational matters.”

In the 1950s when Raven engineers designed large, helium balloons for scientific and military use the seeds that would sprout into Aerostar were planted. The next stage of development was in the 1960s and 1970s for hot-air balloons and small tethered blimps for commercial advertising and promotions, which became the initial business model of Aerostar.

From hot to cold Fortunately, West and company diversified Aerostar’s product lines, with Raven acting as much a partner as a parent. Aerostar applied its core strengths – precise engineering and scientific know-how – to a multitude of other products such as cold-air inflatables, helium balloons, inflatable costumes, remote control blimps, and specialty-sewn products, especially uniforms and parachutes.

“Over the past 25 years, we’ve earned our reputation for being the best technical inflatable manufacturer in the business,” said West. “Our experience and wealth of creative and engineering resources makes Aerostar the first choice for clients ranging from small businesses to the world’s best known theme parks, stage shows and successful companies.”
Additional uses for cold-air inflatables include tour events and promos, sports events and tournaments, store openings and sales, charity events and fundraisers, museums and movie theaters, new product launches and sampling, concerts, conventions and malls, parades and fairs, and company meetings and parties.

Other promotion-oriented Aerostar products, helium balloons and inflatable costumes are used all over the country by companies and the entertainment industry. “Helium balloons and our industry pioneering remote control blimps are a great way to get noticed above the heads of the crowds,” said West, adding, “the durability and reusability of our helium balloons is renowned worldwide.”

As for inflatable costumes and mascots, West pointed out that these are “much cooler and easier for performers to wear and shipping is simpler and more cost effective than heavier costumes. The lightweight costume deflates and packs into a compact, easy-to-ship case with wheels.”

But if there is one area in which Aerostar has excelled it’s as a domestic manufacturer of engineered sewn products. “We produce high quality, high tech military fuel handler coveralls and rainwear garments, parachutes, inflatable military decoys and training devices.”

“We build aircraft so we have an intense quality control program and we began to wonder what might happen if we applied those attributes to clothing and other fabric-based products,” said West. “The results have been remarkable. We are probably one of the few companies that use fabric so intensely as an engineering material. Engineers are taught all about metals and hi-tech plastics, but you would be hard pressed to learn from school about fabrics. We have developed that skill base in house. We are doing incredible things in the area of high-tech parachutes for the military, as well as bio-tech protective clothing, and inflatable decoys.”

Today, parachutes account for almost half of Aerostar’s business, which has as much to do with the quality of its parachutes and the recent demand in parachutes resulting from the United States military efforts in Afghanistan and Iraq. “Afghanistan was a dangerous place and the terrain is treacherous, so many times the only the only way to get things in was by parachute,” said West. At one point, 8,000 to 10,000 Aerostar parachutes were being dropped in Afghanistan each month, said West.

Another key military product application for Aerostar is inflatable decoys. Aerostar did not invent the idea. Prior to the conclusion of the Cold War, 3D, full-size replicas of F-15s and F-16s were being used to dupe enemy pilots into wasting million dollar missiles on a balloon rather than a real plane. But when the Berlin Wall went down, so did military budgets, which sent weapons testers seeking more cost-effective ways to train pilots. Aerostar seized the opportunity by making inflatable replicas of SCUD missile launchers and Russian T-72 tanks.

“A pilot in training traveling at 600 knots only has10 or 15 seconds to decide if the target he’s spotted is the enemy and we build inflatables that resemble those enemy targets, right down to heating systems that enable the pilot to use infrared technology just as he would during an actual maneuver,” said West.

Floating toward the future
Currently, Aerostar is a $17 million company with growth expectations of 15 to 20 percent per year. In 2003 sales were up 30 percent, said West.

“We keep evolving into new technical areas because of the world we are living in,” said West. “The world is becoming a more dangerous place. From that perceived danger we are driven to make new technically advanced products, which is where we see a lot of future growth.”

With a solidly diversified market base – 45 percent parachutes, 35 percent hi-tech apparel, 15 percent cold-air and helium inflatables and 5 percent hot air balloons – the company should be able to sustain a downturn in any one market. But with the United States embroiled in what appears to be more than one long-term foreign conflict, Aerostar’s products are likely to remain in demand.