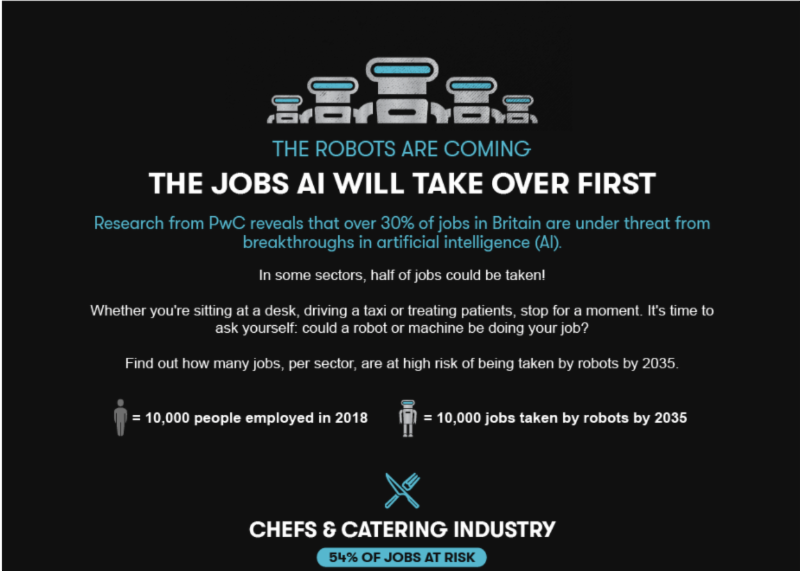 Research suggests that over 30% of jobs in Britain are under threat from breakthroughs in artificial intelligence (AI) technology. With pioneering advances in technology, many jobs that weren’t considered ripe for automation suddenly are. Whether you’re sitting at a desk, driving a taxi or treating patients – stop for a moment. It’s time to ask yourself: could a robot or machine be doing your job?

Using a combination of ONS and PwC data, RS Components has analysed the % of jobs in each featured industry at risk of being replaced by automation (robots) by 2035. These percentages were then used with total employee figures for each industry to establish the total number of jobs at risk.

RS Components have analysed which industries are at the biggest risk of an AI takeover. You can view the findings here.

This comes as no surprise considering how easily process-driven jobs such as those in transportation, customer service and manufacturing can be automated, allowing robots and AI technology to do these jobs quicker and more efficiently, and leaving the jobs that require interaction, personality or creativity to humans.

If a job is repetitive, physical and requires minimum effort to train for, it will have a higher likelihood to become automated by machines. For example in the manufacturing industry, repetitive manual labour and routine tasks can be taught to fixed machines and mimicked easily, saving employers both time and money.

There is no doubt that the manufacturing sector is already leading the way in the application of artificial intelligence technology – using AI-powered analytics to improve efficiency, product quality and the safety of employees. Recent research suggests that more than 90% of senior marketing executives are looking to AI to increase productivity.

However, despite this, experts argue there will always be roles for those who want to hone their skills in manufacturing robotics and in working in the AI industry itself. Complexity volume and margin all combine in different ways to rule out the use of robots in manufacturing businesses, meaning that unless the volume produced or profit made supports the significant cost of using a robot, human workers will continue to manually carry out manufacturing labour.

In addition, some employers will be less at risk than others. The PwC report states that the differentiating factor between losing jobs to automation probability is education; those with a GCSE-level education or lower face a 46% risk, whilst those with undergraduate degrees or higher face a 12% risk.

In order to ensure maximum productivity in the future, humans and robots will need to work alongside each other. Displaced workers could get re-trained to apply their skills elsewhere, or fill gaps that currently exist elsewhere in the labour market.

John Hawswork, Chief Economist at PwC comments:
“Automating more manual and repetitive tasks will eliminate some existing jobs, but could also enable some workers to focus on higher value, more rewarding and creative work, removing the monotony from our day jobs. By boosting productivity – a key UK weakness over the past decade – and so generating wealth, advances in robotics and AI should create additional jobs in less automatable parts of the economy as this extra wealth is spent or invested.”

Manufacturing companies therefore need to be investing money into training and upskilling their employees to take the jobs that this innovation creates. According to research, manufacturers want to retain those employees whose jobs are at risk, with 58% planning to re-skill them to work in other parts of the business, and 54% intending to upskill employees to work in the new roles that technological developments will create.

As the technology becomes more common and more adaptable, price points are likely to drop further, meaning more companies will be using AI technology than ever before. However while unskilled labour may slowly die out, higher level opportunities (developing and running this technology) will amplify.

About RS Components
RS Components is the leading global distributor of electronic, electrical & industrial components for engineers, and has been supporting and inspiring generations of engineers since 1937.