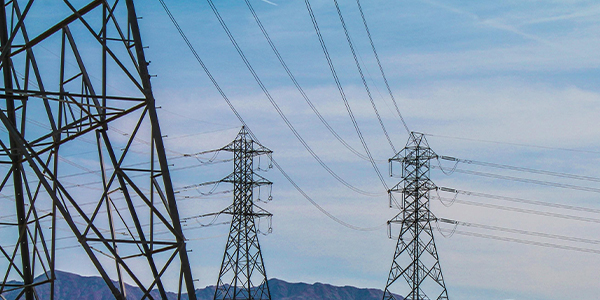 Electrical transmission line towers arise from a landscape with bold splendor. Often standing more than 100 feet high, with arms and legs akimbo in proud stance, they possess a striking symmetry and, viewed in an appropriate frame of mind, an otherworldly structural beauty.

Their physical magnificence is further heightened when one considers the service they provide: transmission towers, with their complex lattice configurations, support overhead conductors and power lines for electric power transmissions that energize neighboring areas, sometimes as far as the eye can see.

Only nature’s terrible force could bow these steel giants – such as when a horrendous ice storm wreaked havoc in central and eastern Canada in January of 1998. The natural disaster, described as unprecedented in the scope of damage, provided an opportunity for Locweld Inc., a widely recognized leader in the steel industry, to demonstrate its mettle.

For four devastating days, three consecutive storms deposited over 100 millimeters of freezing rain (which translates into about four inches of rock-solid ice) over the region, knocking down 1,000 power-transmission towers and 30,000 wooden utility poles. Quebec, the home of Locweld, a company that specializes in the design and manufacture of transmission towers, was especially hard hit. More than a million residents lost their electricity. The outage lasted for weeks, and some people were forced into Red Cross shelters. Locweld was among the organizations that rallied to the cause.

In the aftermath of the terrible storm, Locweld was on the job, repairing the devastated electrical infrastructure and helping to restore power to the distressed populace. “We were forced to double our normal output of steel,” recalls Locweld Vice President Michael Cyr. “At the time, all eyes in North America were on Quebec, so we did what was required to make sure steel was deployed as quickly as possible. This involved a magnificent commitment from our employees which we are proud to say they gave.”

Locweld was amply repaid for its civic-mindedness. As a central figure in the restoration effort, the company doubled its sales for 1998 and, over the course of the next nine years, it experienced a 25-percent growth rate. Today, among the competition in the North American market, the company is at the top of the list, and it enjoys the leading market share in Quebec and Ontario. Moreover, it has participated in all of the major projects taking place on the continent.

Industry Leader
The storm really only provided a surge for an already successful enterprise. Founded in 1947, Locweld has long been regarded as a leader in its industry. One of the largest fabricators of lattice steel transmission towers, the company also produces tubular poles and substation structures, and it also performs bridge fabrication and orthotropic bridge deck work.

The company’s customers include virtually every major utility in Canada and the United States. It also exports its products internationally. “While the largest part of our customer base is in North America, we’ve also been involved in projects in Mexico, Brazil, India and Africa,” reports Todd Shipway, Locweld’s director of sales and marketing. “So we have a very strong international reach.”

Sixty Years in Business
Locweld was established as a small shop in Montreal in 1947. “Initially, the company fabricated aluminum garage doors and patio doors,” says Cyr. “Then, in the early 1950s, the shop was retrofitted to handle transmission towers for the electric power industry.”

As that industry grew and its needs expanded, Locweld moved to a fully crane-serviced facility in Candiac, Quebec. Built in 1968, the 220,000-square-foot facility was geared for lattice tower fabrication and it later acquired equipment that enabled it to compete in the tubular pole market. The facility’s current output is estimated at 30,000 tons of steel per year.

In 1991, Locweld bought an 80,000-square-foot plant in Cornwall, Ontario, which was equipped to complement the Candiac plant. “That facility encompasses a lot of our welding capacity, and we fabricate a lot of our bridge work there,” says Shipway. “It also has a higher crane capacity.”

The facilities are ISO 9001:2000 & ISO 14001 certified, and the Canadian Welding Bureau (CWB) recognizes Locweld as certified to Division 1 of the Canadian Standard 47.1. The CWB certification requires that Locweld employs a full-time engineer qualified for welded design, welding procedures and practice, as well as a fulltime welding supervisor responsible for all weldments. In addition, both facilities have rail, port and road access for shipping.

In 2005, Locweld joined forces with Tavis Software Inc., a highly skilled company based out of Montreal, Quebec, specializing in ERP Solutions for custom manufacturers. The Tavis ERP System has been a key component in bringing together all levels of Locweld’s business functions in order to maximize efficiency throughout and transfer savings directly back to our customers.

As part of the facility’s comprehensive production processes, all Locweld products are subjected to trial assembly that enables the company to assemble 200’- 0 sections at a time, thus ensuring its customers that all materials are verified and approved at all levels prior to delivery. Furthermore, this guarantees easy assembly in the field.
“Every tower type that goes through the facility is submitted to this trial assembly process prior to mass fabrication,” explains Shipway. “In this way, we know that everything lines up, all of the holes are correct, all of the clippings are in place and everything fits before the large amount of production is initiated. This alleviates any headaches for the user. It has been a crucial asset for us, and it is very much appreciated by all of our clients.”

Product Range
Locweld boasts extensive experience in steel transmission tower fabrication up to 765kV and including a full range of self-supporting and guyed lattice towers. Tubular poles are another key element in its product line. The company’s fabrication capacity enables it to manufacture poles in 30-foot sections with an array of base diameter sizes that meet client specifications. Moreover, Locweld can integrate tower and pole structures for projects that require a combination of the two.

Further, the company offers design and fabrication of substation structures of any size, and its size and crane capacity enable it to provide steel bridge structures. “We’ve serviced all of the major bridge projects in the Montreal area,” indicates Shipway.

Bridge work in the Montreal area has included provision of orthotropic steel decks for the Champlain Bridge and steel deck panels for the Victoria Bridge and the Jacques Cartier Bridge. Locweld has also fabricated a number of rail bridges across Canada and the United States.

In addition to design and fabrication, Locweld offers in-house galvanizing (cleaning and hot dip), a service it has offered since 1969. Its galvanizing department is serviced by a multitude of cranes including a 4.000-pound-capacity davit arm, two overhead cranes with a capacity of 15 and 7 metric tons and a monorail crane system with a maximum load of 8,000 pounds.

By being able to provide galvanizing in addition to design and fabrication, Locweld has established itself as a “full service” operation for all of its customers’ requirements. “We have pulled together all of the key elements for a successful project, from A to Z, under one roof,” comments Shipway. “Because we’re a full service operation, customers have peace of mind knowing they have only one call to make.”

Changes in Project Profiles
As it heads into the future, Locweld is addressing industry trends related to project scales and content. Cyr indicates that the most significant industry trend involves the increasing size of projects. “For many years, projects were relatively modest. More recently, projects involving massive amounts of transmission lines have been developed, particularly in the western parts of Canada and the United States,” he says.

A representative example of this direction is the multi-million dollar Jackson Ferry-Wyoming project for American Electric Power (AEP). In 2004, construction began on this first in-service, six conductor 765-kV overhead transmission line in the United States. The line extends from the Wyoming Substation in West Virginia to the Jackson Ferry Substation in Virginia. Spurring the project was an increasing demand for electricity that posed a significant threat to power reliability in southern West Virginia and southwestern Virginia. This compelled AEP to reinforce its transmission system. Locweld provided the project with the tower structures, which averaged in height 132 feet (the highest reached nearly 180 feet).

“This was the largest project that had been seen in the United States for more than 15 years,” reports Cyr. “Usually, when we talk about big projects, we’re either talking about tonnage or miles of line. Up until this point, we had been doing projects that involved three and four thousand tons. This one involved 13,000 tons.”

The project presented several firsts, adds Shipway. Perhaps most importantly, it involved the first line with a six-bundle conductor configuration used for a 765 kv transmission power line. “It was an immense milestone for us,” he says.

“It presented us with an opportunity to demonstrate that we are right at the top, that we’re the guys you go to if you have a big project,” remarks Cyr.

As far as project content, Shipway points out that things have been changing in the past 10 to 20 years, and will continue to evolve. “Some of the larger projects we’ve been engaged in have involved fewer tower types, which allow for a higher, more efficient production level. However, recently, utilities are starting projects that call for many more tower types, which is much more time consuming on the engineering and production levels,” he says. “We’ve seen that already in a few projects, and this will probably be the case for the next five to 10 years. In response, we’re talking with the engineering firms that assist us in some of these projects, making them aware of what is coming up.”

An Industry Standout
In tackling increasingly complex projects, Locweld has separated itself by both capacity and quality. “Our capacity is one of the things that differentiates us from the competition. No other company in Canada or the United States can offer the same capacity,” says Cyr. “We’ve also established ourselves on quality, which goes hand-in-hand with the caliber of our employees, both in the shop and in the office. Our staff is both dedicated and experienced, and without them, there’s no chance that we’d be enjoying the kind of success we’ve experienced.”

But the company’s success is perhaps best characterized by conjuring a visual metaphor. The tall structures that Locweld, Inc. erects reflect the high standing it has attained in its industry.