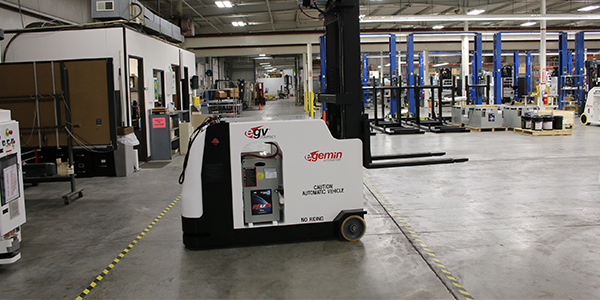 Over the last 25 years the Automatic Guided Vehicle (AGV) experts with Egemin Automation Inc. in Holland, Mich., have experienced quite a bit of change. But they have never lost their focus on designing and manufacturing the world’s best AGVs for a variety of industries including automotive, distribution, general manufacturing, paper, textiles, and pharmaceuticals.

In 2000, Egemin Group acquired the company a few years after it had struggled to remain independent following its spin off from Litton Industries. The Antwerp, Belgium-based corporation was seeking a company in the United States to expand its footprint in North America and to eliminate its dependence on European AGV suppliers, said Yves Gazin, Director of Technical Sales and Marketing. Today, Egemin’s Automatic Guided Vehicle, the E’gv®, leads the industry.

“Egemin’s ownership of the Holland facility is different from the preceding models” said Gazin. “Before Egemin purchased the company we were tied into one industry, it hurt us as we were not able to compete in material handling. It was problematic. Here we had superior technologies and better design capabilities and we were not allowed to compete in the marketplace. This technology base was one of the pivotal motivations for Egemin when purchasing the AGV group. Egemin turns to Michigan for AGV research and development. It’s a critically important division that has helped the corporation achieve cost savings and gain significant strategic advantage.”

Egemin Group has grown in half a century from a small electromechanical company into a 600-employee strong enterprise delivering world class automation solutions and performance enhancing services for food, pharmaceutical, warehousing, and distribution industries. Its expansion in the United States involved pinpointing a company that could produce AGVs that require little to no outsourcing. Most AGV manufacturers depend on proprietary components and on European navigation technologies, said Gazin.

“AGV companies that rely on that method of manufacturing have a time differential not to mention the distance of an ocean to deal with, which causes serious logistic concerns,” said Gazin. “Our Holland operation resolves those matters because we have the software engineers in-house. When clients have a question about an Egemin AGV we have the answer, whereas companies that use competing products have to ask the same question to several companies involved in the manufacture and installation of AGV components and infrastructure.”

Navigating the options
AGVs perform numerous applications, saving companies substantially in labor fees. AGVs transport totes, paper rolls, and pallets, to name just a few applications. Depending on the application and the physical layout of a facility, AGV options vary for companies seeking to install an AGV system into their manufacturing or distribution process, according to Gazin.

“Egemin E’gvs® exist in all shapes and forms; from lightweight to heavy duty; from simple off-the-shelf vehicles to technically complex vehicles,” said Gazin. “For the best load performance, any material handling device can be integrated into your vehicle.” The company’s E’gv® vehicles are equipped with batteries to carry out transport tasks. The batteries are automatically recharged via opportunity charging or a manual swap.

Many factors go into an AGV navigation system decision such as type of industry, make-up of the plant floor, and number of obstacles. Wire, the most common navigation until the 1990s, utilizes a sensor within the AGV to “sniff” wiring in the floor and follow a planned route. Typically wire installations are more costly than other alternatives because these require digging up the floor and putting lengths of wire throughout a factory or distribution center, said Gazin.

Egemin vehicles accurately follow their pre-defined guide path and complete their tasks efficiently. Egemin has developed its own navigation system for the E’gv® vehicles. This navigation system, E’nsor®, supports all the possible navigation techniques and updates with the latest technologies. With an AutoCAD drawing, on which all the E’nsor® data for navigating the vehicle is based, the company has a flexible tool for changing and adapting a customer’s layout easily.

Since Egemin has expertise in all the navigation methods and is able to combine these to a “multi mode navigation” system, the company will integrate the most efficient and cost-effective method. For example: Storing goods in racks in narrow aisles may require wire guidance while operating outside the storage area, i.e. in the production area, may require laser navigation.

Another navigation method is called inertial, which is based on a gyroscope and detecting magnets buried in the floor. Less intrusive than wire, this installation requires that holes be drilled into assembly or distribution center floors. Magnets are then inserted into the holes and covered with a little layer of epoxy.

Gazin identified several common criteria for choosing inertial navigation. “It’s a more flexible solution, which allows for layout changes without major construction work. Relatively little has to be done to the floor surface. Installation is not restricted to floor plates, building joints, cable ducts, and inertial navigation tends to be independent of floor inclinations and environmental influences.”

Additionally, Egemin manufactures a laser-based system with a rotating laser mounted on the top of an AGV. Reflectors are placed throughout the facility, which allow the AGV to use triangulation to determine its location and next move in its programmed itinerary.

“No matter what the application, Egemin helps customers choose the right technology,” said Gazin. “We install wire, laser, inertial, or any combination of navigation systems. We work with our customers to re-create their applications in our testing center to show them that the AGV they are purchasing will do exactly what they need it to do once the vehicles arrive on the customer’s premises.”

Reliable and customizable
“We strive to produce high quality products and maintain the highest standard in the industry,” he added. Among the companies using AGVs built by Egemin are Honda of America, DaimlerChyrsler, Proctor & Gamble, and The Toronto Star. Egemin’s market is global, but as Gazin points out that 90 percent of the company’s North American business (United States, Canada and Mexico) takes place east of the Mississippi.

Egemin’s AGVs are reliable and customizable to any application, and capable of operating in normal working conditions, extremely cold or hot areas, and even in dangerous environments. It’s the kind of quality that comes from a company focused on one thing for over a quarter-century. Said Gazin, Egemin’s technological edge puts the company two years ahead of its competitors. “Because we do our own R&D and design our own software, utilize off-the-shelf components, we are able to offer the lowest total cost of ownership in the market.” These advantages will no doubt propel Egemin further as a leader in the AGV market.